I refuse to watch the new Sex And The City — because there’s no Samantha, says EMILY HILL

Sex And The City is back — but without Samantha. Which is a bit like intercourse without the orgasm: what is the point?

So although it’s all many women my age can talk about, I won’t be switching on the reboot of the show, And Just Like That…, when it is screened next week.

The original series was unflinching in its portrayal of four women’s love lives and friendships. It transfixed my generation from the late 1990s to the mid-2000s — and changed the way we talked about sex irrevocably.

Now it’s back. The teaser trailer shows Carrie, Miranda and Charlotte, now in their mid-50s, resuming their story in New York, where not much seems to have changed. Sarah Jessica Parker, as Carrie, squeals at a restaurant reservation. Kristin Davis’s Charlotte runs a finger over some flowers in her Park Avenue flat. As career-driven Miranda, Cynthia Nixon’s hair is more epic than ever.

Emily Hill explains why she won’t be watching the new series of Sex And The City, as Kim Cattrall who played Samantha (pictured) confirms that she won’t be returning for the reboot

On YouTube it has been viewed almost nine and a half million times but earned only 12,000 likes, which suggests I’m not the only one who’s turned off. ‘This feels like being introduced to your father’s new girlfriend,’ one comment reads. ‘Smile. Be polite. Hold off judgment until you can officially confirm you hate her.’

What’s missing, of course, is the fourth friend: the independent and uninhibited Samantha. Kim Cattrall, the Liverpool-born actress who played the character through six seasons and two films, has confirmed she won’t be returning after an explosive falling-out with her co-stars.

Most of us assumed her character would be killed off, but instead reports say ‘Sam’ has been sent to London in a plotline which was ‘the perfect way to keep her alive and explain her absence. Viewers will learn she is thriving in England even though she has fallen out with Carrie’.

As someone who’s always falling out with everyone, I raise a Cosmopolitan to Kim for putting her kitten heel down on the subject of playing Samantha again — considering what they did to her character in the films.

Sex And The City was first screened in 1998. The whole series opens with Carrie announcing that, in Manhattan, love is dead. While the others obsess about getting married and having children, Samantha is different.

She’s the oldest at past 40, a publicist, and her approach is if you can’t beat the culture, enjoy it: ‘Sweetheart, this is the first time in the history of Manhattan that women have had as much money and power as men, plus the equal luxury of treating men like sex objects.’

The series began when I was a 15-year-old virgin and I had zero sympathy with this approach, as I read a lot of books and was going to marry Darcy, Willoughby or Wentworth. Clearly.

As much as I found Samantha funny, her life was hard to identify with. I didn’t think anyone should be treated like a sex object. 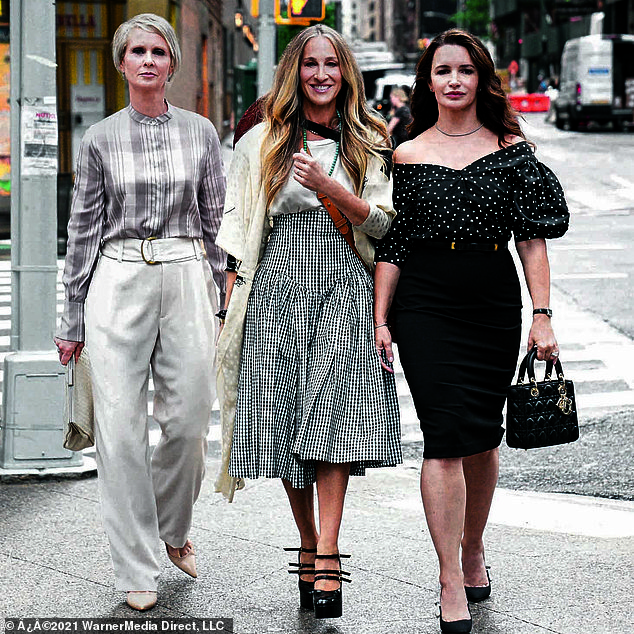 Emily, who has watched the whole of Sex And The City again twice, said the true heroine of the show is Samantha. Pictured from left: Cynthia Nixon, Sarah Jessica Parker and Kristin Davis

But in lockdown, aged 38, still single and so defeated after 20 years on the dating frontline that I’m waving the white flag of surrender, I watched the whole of Sex And The City again — twice.

Once out of sheer loneliness and then a second time because I was suddenly struck by what I’d missed the first time around. Which is that the true heroine of the show, and the only one who really grows up, is not Carrie (who cheats on nice guy Aidan and ends up with the man she cheats on him with — Big); Charlotte, who marries money (sure, he’s bald, but she gets to keep that apartment); or Miranda, the second-wave feminist who finds herself with a husband, child and housekeeper.

No, the kindest, most human one is always Samantha. She’s the one who tells Big to stop messing Carrie around. She babysits for Miranda despite hating kids.

She defends Charlotte, who longs to be a mum, when a pregnant friend steals the name she made up for her yet-to-be-conceived baby (this is my favourite bit of the whole 47 hours of SATC; Samantha yells ‘You b****!’ at the mum- to-be, puts her arm around Charlotte and escorts her from the baby shower). And all this is despite the fact that she is repeatedly horribly used by men with no humanity whatsoever.

In a world of dating apps, which have now brought about the death of love in London as well as Manhattan, I don’t just sympathise, but bang my fist on the table and cry: ‘Je suis Samantha!’

At one point, Sam has her heart incinerated by the evil Richard. In response, she staples pictures of him to lamp posts to alert other women and gets stopped by a policewoman who tells her it’s a crime. Sam reveals what he did and is told ‘Carry on, ma’am’.

It’s hilarious — but it also has to be the most heartbreaking moment of the series. As someone who now knows what it is like to have her own heart incinerated, I feel the pain of this in a way I can’t with the other break-ups in the show.

Anyone who has ever loved Sex And The City identifies with one of them — I’ve always said I’m a writer like Carrie, as cynical as Miranda and a Pollyanna like Charlotte. But watching the series again, and so fed up with being used by men, I was Team Sam all the way. 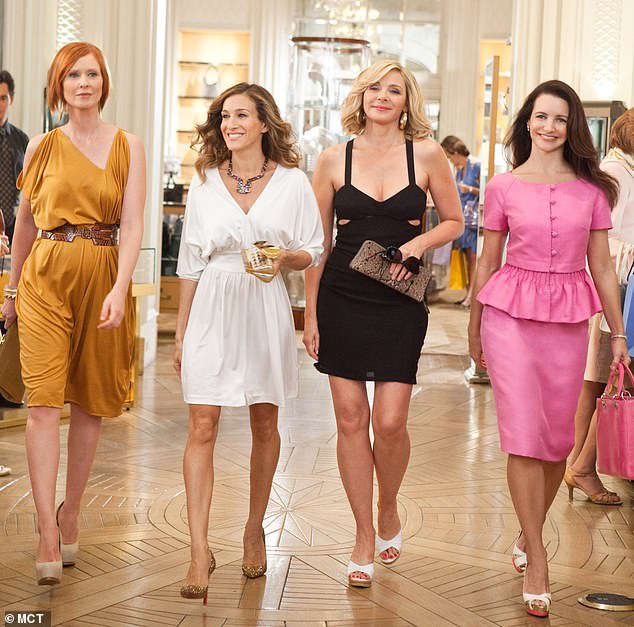 Emily wishes Samantha had strutted off with Smith into the sunset at the end of series six and never came back at all. Pictured from left: Cynthia Nixon as Miranda Hobbes, Sarah Jessica Parker as Carrie Bradshaw, Kim Cattrall as Samantha Jones and Kristin Davis as Charlotte York

Was a life of endless sex what she chose or what she pretended to want because she refused to see herself as a victim? This feels so relevant to modern dating that I’m thinking of printing T-shirts with her epic line: ‘The right guy is an illusion. Start living your lives!’

Despite telling everyone she only wants sex, Samantha has three serious relationships. When she finally finds a decent, beautiful man, Smith, it’s like watching my mother’s love advice proven right on screen. (‘It’ll happen when you least expect it,’ she says.)

When Sam starts dating Smith, she is so shocked that he’s trying to hold her hand in public that she falls down a flight of stairs and breaks her foot.

And yet, as he slowly wins her trust, she repays him a thousandfold, using work connections to transform him from a waiter at a raw food restaurant into a Hollywood star. It’s proof that what’s most crucial to Samantha Jones is not her cosmic libido, but her human heart.

What I hate (hate, hate!) about the films is that they ruined this happy ending. In the first, she was sent to LA and became a sort of desperate housewife, hand-making Smith sushi and using her naked body as a platter, only for him to call saying he had to work. (‘How,’ I screamed, ‘does Sam have nothing to do but sit at home and wait for him? She’s a publicist — in LA.’)

It’s also implied that Sam has let herself go, so why would he make time for her anyway? ‘Mother of God, what’s with the gut?’ a friend asks her when she returns to New York looking thinner than I am.

By the second film, fifty-ish Samantha’s menopause had become a two-hour-long joke. It culminated in her taking off her clothes in a souk because she’s sweating so much, then throwing condoms in the air and shouting ‘I have sex!’ at all the offended Muslim men surrounding her.

Who knows what godawful thing they’d have done to her in this new series. Kim Cattrall has received a lot of criticism for refusing to reprise the role, first when a Sex And The City 3 was proposed (‘I remember getting a lot of grief on social media,’ she said) and now for the reboot.

Personally, I wish she had strutted off with Smith into the sunset at the end of series six and never come back at all. Because if Sam Jones can’t get out of the dating game with her dignity intact, what hope is there for the rest of us?