After Gavin Newsom was sworn in as the governor of California earlier this month, his wife, Jennifer, announced her decision to forgo the traditional title of "first lady". She will be known, instead, as California's "first partner".

Jennifer Siebel Newsom, who wrote and directed, Miss Representation, a documentary about the underrepresentation of women in leadership, fashioned this term to signal her commitment to gender equality. 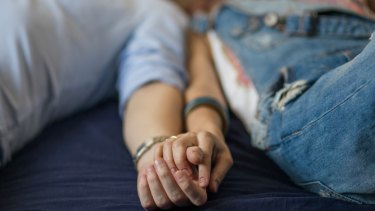 Forget ‘boyfriend’ or ‘girlfriend’, relationships of all lengths and seriousness are going under the one title.Credit:Stocksy

"Being First Partner is about inclusion, breaking down stereotypes, and valuing the partnerships that allow any of us to succeed," she tweeted in January. "Grateful for this opportunity to continue advocating for a more equitable future – now let's get to work!"

But with this new title, reflected on the governor's official website, Siebel Newsom is also publicly validating her constituency's changing lexicon. Increasingly, progressives are swapping the words "boyfriend" and "girlfriend" – and even "husband" and "wife" – for the word "partner".

According to data compiled by Google Trends, the search term "my partner" has been steadily gaining traction: it's more than eight times more popular today than it was 15 years ago.

"There are so many words that you first hear and think, 'That's weird.' Then they begin to seem more normal," said Deborah Tannen, a professor of linguistics at Georgetown, who studies the language of relationships. "That's definitely happened with the word 'partner'."

Originally used to describe a business relationship, "partner" was slowly adopted by the gay community in the US in the mid to late 1980s, said Michael Bronski, a professor of women and gender studies at Harvard University.

As the AIDS epidemic rattled the country, he added, it became critical for gay people to signal the seriousness of their romantic relationships, both to healthcare professionals to gain access at hospitals, and, eventually, to their employers, once companies began to extend healthcare benefits to domestic partners.

After the term "domestic partnership" gained significant legal and popular recognition, "partner" became the default word for much of the LGBT community until same-sex marriage was legalised.

On certain college campuses, several students said, it would come across as strange, even rude, to use the terms "boyfriend" or "girlfriend" in lieu of the more inclusive, gender-neutral "partner".

"At Harvard, everyone is very polite and liberal," Bronski said.

The clearest explanation for the word's spike in popularity is the lack of any other good options.

Unmarried people in serious relationships, in particular, face a gaping linguistic hole. "Boyfriend" and "girlfriend" are too high school. "Significant other" sounds like it belongs on a legal document. "Lover" connotes too much sex for everyday use; "companion", not enough.

"Partner", on the other hand, implies a set of values that many couples find appealing.

"It's a word that says, 'We are equal components of this relationship,'" said Katie Takakjian, a 25-year-old lawyer based in Los Angeles, who started using the term "partner" while interviewing at law firms. One of the youngest students in her law school's graduating class, Takakjian told me, she worried the word "boyfriend" could make her seem even younger.

For a long time, a wedding was the only way to signal the depth and seriousness of a romantic relationship, said Amy Shackelford, founder and CEO of the feminist wedding planning company Modern Rebel.

"But we work with couples who get married six years, nine years, 12 years, after they started dating," she told me. "You think they weren't serious before then?"

The word "partner," she said, gives couples the power to publicly announce a lasting adult commitment, without an engagement or a wedding. If the couple does decide to get married, the ceremony itself serves not to solidify the relationship, but to celebrate it, surrounded by family and friends.

Many couples continue to use the word "partner" even after they're married. Shackelford, who got married in November, has a visceral negative reaction to the words "husband" and "wife".

"Those words carry a lot of baggage," she said, conjuring 1950s images of the man who comes home expecting dinner on the table; the woman who bears sole responsibility for raising the children.

If Takakjian gets married, she also plans to continue using the word "partner," especially at work.

"There is still so much societal pressure for a woman to step back at work once she gets married," she said.

Takakjian worries about the stereotypes that partners at her firm – many of whom are white men over 50 – associate with the word "wife".

The word "partner", Takakjian said, could be one way to challenge those assumptions.

The growing preference for "partner" over "husband" and "wife" could suggest a shift that goes beyond labels and language. When Time magazine asked readers in 2010 whether marriage was becoming obsolete, 39 per cent said yes – up from 28 per cent when Time posed the same question in 1978.

Millennials, who are marrying later in life than any previous generation, increasingly view the institution as "dated", said Andrew Cherlin, a professor of sociology and the family at Johns Hopkins University.

"If you get married in your 20s, and you're part of a college-educated crowd, it might feel old-fashioned or even embarrassing to admit that you're married." Because today's young newlyweds are far less eager to trumpet their marital status, he told me, they're gravitating to "partner".

But some members of the LGBT community are skeptical.

"It's a joke we all know," said Sean Drohan, a teacher based in New York City who identifies as gay. "If I was making a movie for a gay audience, and a straight couple introduced themselves as partners, that would definitely get a laugh."

For most of his life, Drohan told me, he assumed he'd never be able to get married, and struggled with which words to attach to his romantic relationships, present and future. His father, he remembers, used the word "lover", which felt awkward and strangely disparaging. Gay people, he said, "have had the experience of treading weirdly over different words", ultimately finding "partner".

"That was our word," he said. "And it kind of sucks for other people to want in on that."

He is especially dubious of people who use the term as what he calls a "performance of wokeness", an attempt to publicly showcase their progressive worldview.

"If they want to say 'partner', people of relative privilege should take a moment to reflect on their word choice," Coco Romack wrote for Broadly last year. "It never hurts to check yourself by asking, 'Why am I choosing to identify this way?'"

Drohan knows many straight people have good answers to that question. He finds the most obvious one particularly compelling.

"There is no non-marriage marriage term, for anyone," Drohan said. "So on a logistical level, 'partner' just makes sense."