Return of the 70s dinner party! Searches for prawn cocktail, baked Alaska and beef stroganoff soar by up to 300% as Britons crave nostalgia while restrictions ease

Nostalgic 1970s dishes are set to make a comeback as sales of dinner party staples from the era including prawn cocktail, beef stroganoff and baked Alaska have soared in popularity as lockdown restrictions ease.

Recipe searches for prawn cocktail have risen by more than a third this month, according to new figures from Waitrose, while there was a 300 per cent boom in those searching for how to make a stroganoff as people opt to make the classic recipes including beef wellington and coronation chicken.

And the trend continues to those looking to whip-up a dessert as Waitrose has seen a 200 per cent increase in searches for Baked Alaska, as well as spotting surges in searches for Black Forest Gateau, arctic rolls and chocolate roulade. 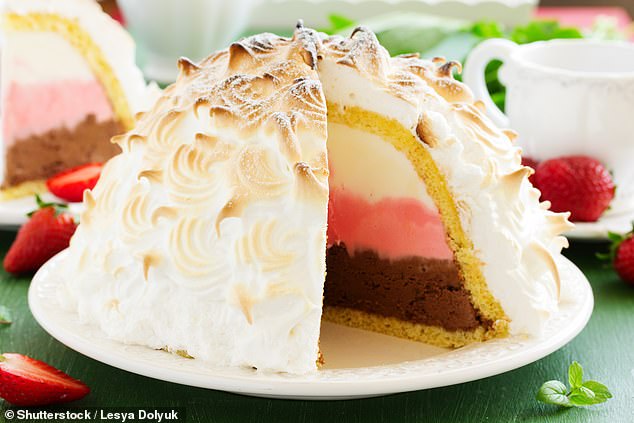 Nostalgic 1970s dishes are set to make a comeback as sales of dinner party staples from the era including prawn cocktail, beef stroganoff and baked Alaska have soared in popularity as lockdown restrictions ease. The trend continues to those looking to whip-up a dessert as Waitrose has seen a 200 per cent increase in searches for Baked Alaska, as well as spotting surges in searches for Black Forest Gateau, arctic rolls and chocolate roulade

The British supermarket has also seen a boom in sales of champagne and dessert wine at Waitrose, up 49 per cent  and 37 per cent respectively as we prepare for the Bank Holiday weekend and sales of roasting joints are up 48 per cent.

Searches for canapes on Waitrose.com are up 484 per cent and searches for blinis are up 101 per cent compared to the same week last year as many Britons prepare to meet up for the first time on Bank Holiday Monday.

Millenials whipping up the dishes at home have also taken to social media to show off their skills, with more than 60,000 posts using #bakedalaska on Instagram, while more than 73,000 have shared snaps of stronganoff and a further 45,000 have posted pictures of prawn cocktail.

‘It’s clear we’re revisiting our childhoods and recreating recipes such as prawn cocktail, devilled eggs and baked Alaska, dishes which our parents and grandparents would have served for an extra special evening.

‘We’ve also seen sales of roasting joints up 48 per cent compared to last year, as customers are serving a dinner party centrepiece during the unseasonally cooler weather.’

Jelly is enjoying a resurgence in popularity driven by nostalgic millennials who want to recapture the taste of their childhoods, according to the upmarket supermarket.

Waitrose has seen a spike in sales of the old-fashioned treat as stressed-out shoppers seek out familiar flavours for summer garden parties and BBQs.

Traditionally a simple dessert, jelly has been given a grown-up update using experimental flavours, shapes and colours that ‘pop’ on Instagram.

London’s Michelin-starred Hide, which offers a Glazed Croissant Tartlet featuring a strawberry jelly on its summer menu, is leading the charge of restaurants bringing back jelly for a more sophisticated palate. 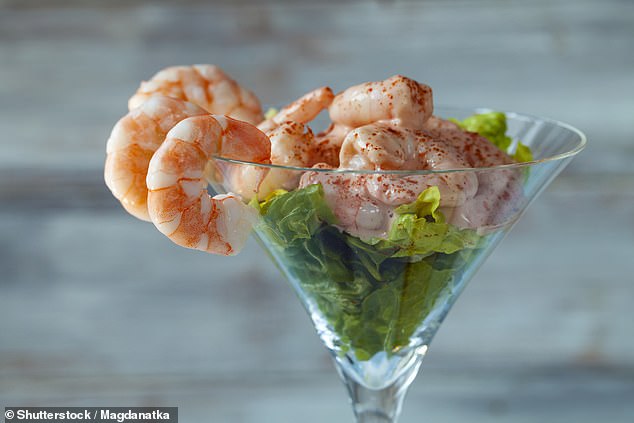 Recipe searches for prawn cocktail have risen by more than a third this month, according to new figures from Waitrose

Waitrose recipe for a Prawn cocktail

1. Pat the prawns and crevettes dry on kitchen paper.

3. Cut 3 of the gem hearts into thin wedges and shred the remaining one. Halve the cucumber lengthways and remove the seeds with a teaspoon, then cut into long diagonal slices. Remove the skin and stone from the avocado and slice the flesh.

4. Scatter the lettuce, cucumber and avocado over a large platter. Top with both the peeled prawns and drizzle with half the dressing. Dot with spoonfuls of the salmon caviar (if using), crevettes and freshly ground black pepper. 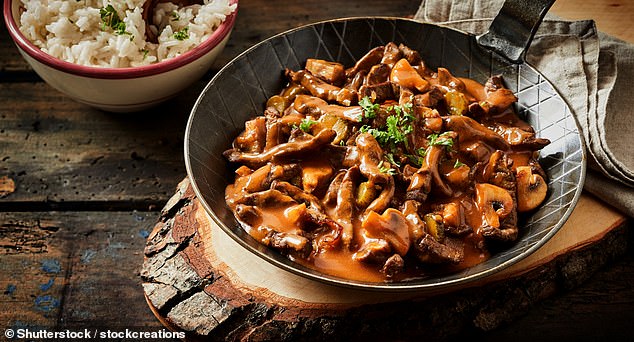 Arrange the cake slices on a baking tray with plenty of space between them and sprinkle with the sherry.

Spread the orange curd over each slice and top with a scoop of ice cream. Place in the freezer while you prepare the meringue.

Whisk the egg whites until they form stiff peaks then add half the sugar.

Continue whisking until stiff and glossy then fold in the remaining sugar.

Spoon the meringue mixture over the ice cream and cake, covering completely.

Sprinkle with a few flaked almonds and bake for 2–3 minutes until the meringue is just golden. Serve immediately.

Sales of Waitrose’s jelly child desserts are up 21 per cent year-on-year, while gelatin, which is needed to make your own jelly, is up 13 per cent on last year.

John Lewis has also seen a surge in sales of tablecloths up by 73 per cent compare to last year as people prepare to host again.

It comes following a year of increased demand for nostalgic goods as people seek home comforts following a difficult 12 months.

Sales of trifles are up 35 per cent on last year and other retro desserts such as sticky toffee pudding and cherry pie have seen a 60 per cent increase, figures from the British supermarket chain reveal.

The humble apple and blackberry crumble is another dessert which is receiving more love than normal as it has sold 13 per cent better than last year.

Online searches for ‘sponge pudding’ and ‘bread and butter pudding’ also saw an increase by 888 per cent and 349 per cent respectively.

‘School dinner cake’, a vanilla sponge cake with white icing and sprinkles has taken over UK social media, with more than 25,000 posts on the hashtag.

It’s become so popular it’s appearing on menus at restaurants and bakeries across the country offering home delivery – as thousands become nostalgic for the dessert which is being branded the lightest, fluffiest, cake ever’.

The experts behind the Young British Food & Drink Awards, which celebrates fresh voices in food writing, also found that nostalgic deserts are on the rise in their 2021 report.

When times get tough, escapism is the place Brits find happiness and M&S has seen the mini battered sausages chip shop style boxes soar in sales due to our love affair with comfort food, the YBF report reveals.

Sales of ‘old fashioned’ sweets from people’s childhoods, like cola cubes, rhubarb and custards, mint imperials, sherbet pips and other nostalgic products such as fudge, toffee and chocolate are soaring as the UK endures continued restrictions. 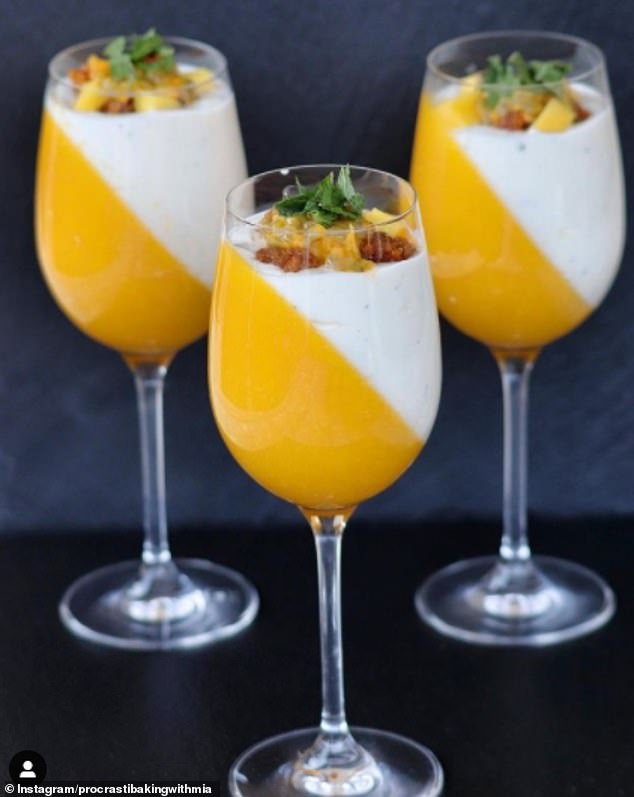 Taste of childhood: Jelly is enjoying a resurgence in popularity driven by nostalgic millennials who want to recapture the taste of their childhoods, according to Waitrose. Pictured, a mango and passion fruit jelly served with vanilla and mint infused Greek yoghurt and biscuit crumble 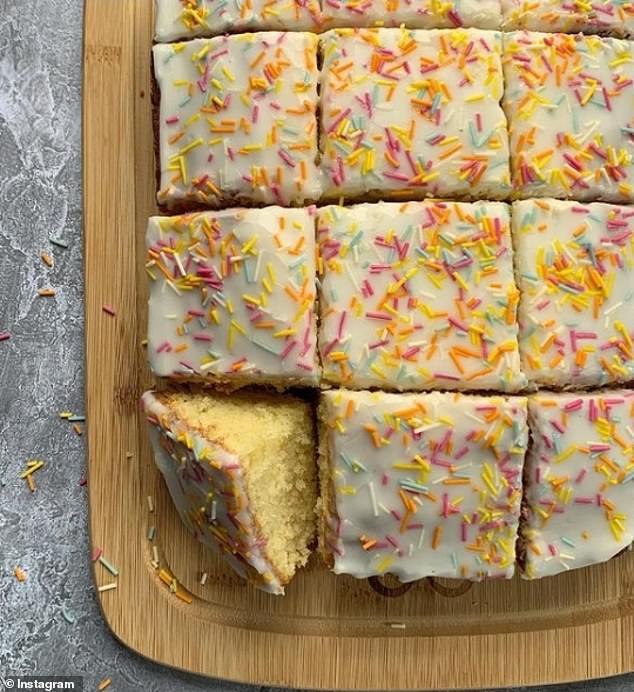 ‘School dinner cake’, a vanilla sponge cake with white icing and sprinkles has taken over UK social media, with more than 20,000 posts on the hashtag in the last few weeks. Pictured: One Instagram users cake

HOW TO MAKE ‘SCHOOL DINNER CAKE’

2. Mix together butter and sugar until light and fluffy

4. Sift in the flour and fold to create a creamy batter

5. Transfer batter to preheated oven and bake for 50 minutes, until risen and golden

7. Mix icing sugar with boiling water until you have a thick consistrncy to pour onto cake

8. Once cake is cooled, pour on icing using a spoon to guide to the edges and finish with sprinkles

Cartwright & Butler, which is based in Yorkshire, reported a rise of 170 per cent in sales of butter fudge, earlier this year, while salted caramel fudge shot up a staggering 4500 per cent and peanut brittle purchases were up 84 per cent compared to the same time last year.

Psychotherapist Charlotte Fox Webber previously told MailOnline: ‘In a time period of turbulence and distressing change, nostalgia transports us back to what we know— and there’s such sweet familiarity in things from the past.

‘There’s something so evocative and comforting about past associations and memories. It makes complete emotional sense that in an era of chaos and sorrow and stress, we feel safe when we are reminded of childhood pleasures’

Jelly recipes for YOU to try at home

Waitrose shares three of its most popular jelly recipes: 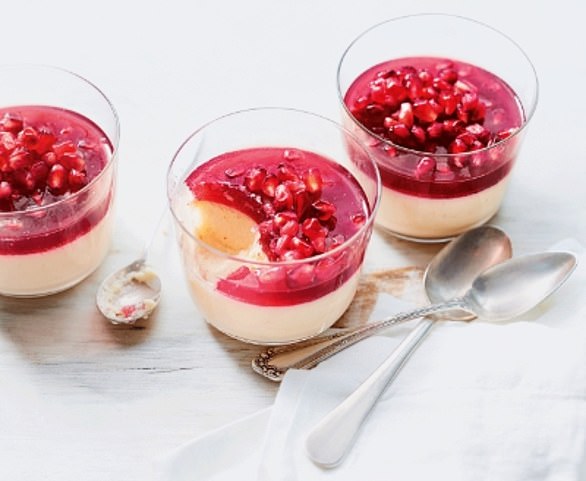 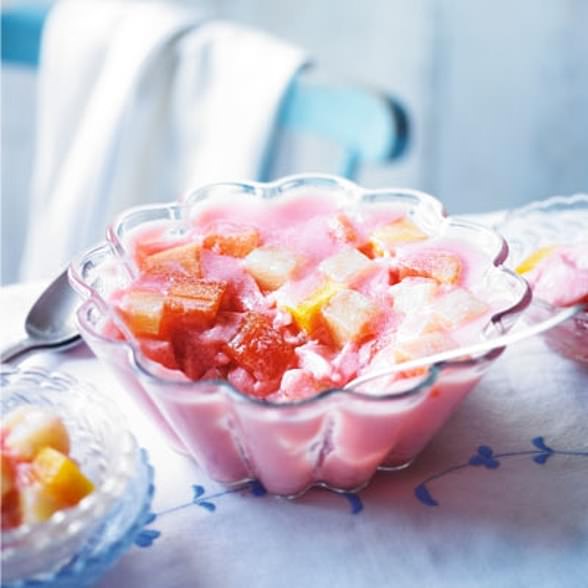 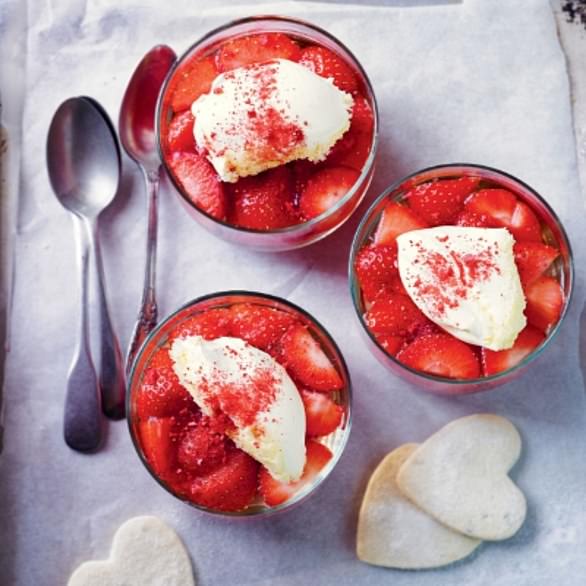