A woman has recreated her own McDonald’s Mocha Frappe – and posted a video to show how you can do it at home, too.

While the popular fast food chain may have closed its doors amid the coronavirus pandemic, many have set to work in the kitchen in a bid to make their own versions.

The savvy homeowner, from the UK, shared a video to the Facebook group Extreme Couponing and Bargains UK group, and penned: ‘Thank you to whoever shared the McDs mocha frappe recipe. It tastes exactly the same! Maybe a little bit better.’

The recipe, which was initially shared by The Chunky Chef, claims there are six key ingredients: Cold coffee, almond milk, chocolate syrup, granulated sugar, whipped cream and a chocolate bar for the finishing touches. 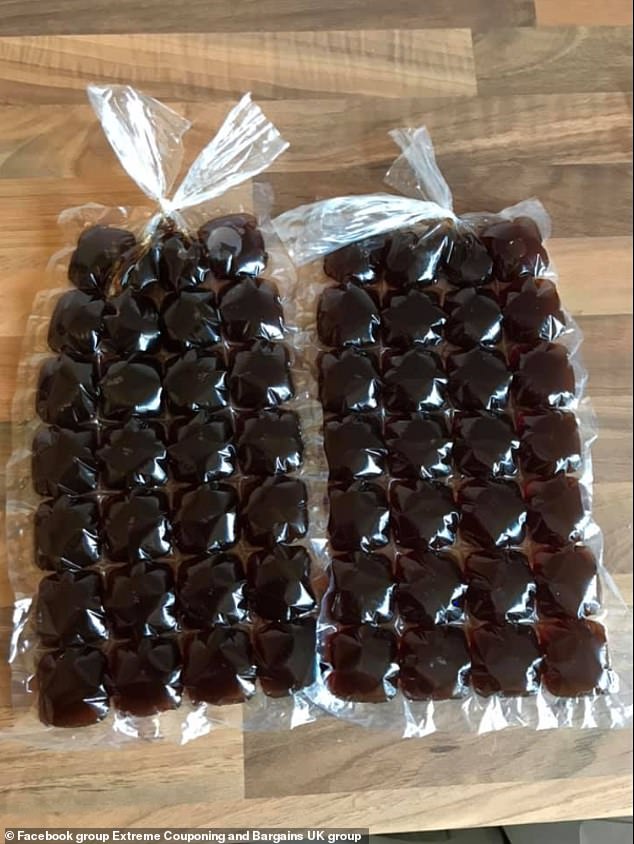 A woman, from the UK, shared a recipe for the McDonald’s Mocha Frappe to the Facebook group Extreme Couponing and Bargains UK group. She explained step one involved brewing the coffee and letting it cool to room temperature, before pouring the coffee into ice cube trays and placing in the freezer 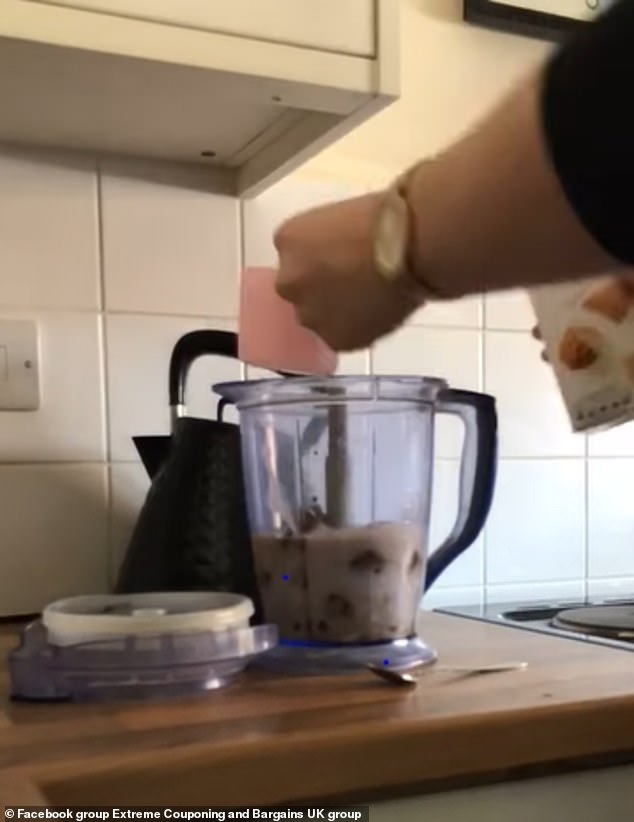 The savvy homeowner went on to say you then place the frozen coffee ice cues into a blender along with the almond milk, sugar, and chocolate syrup (pictured) 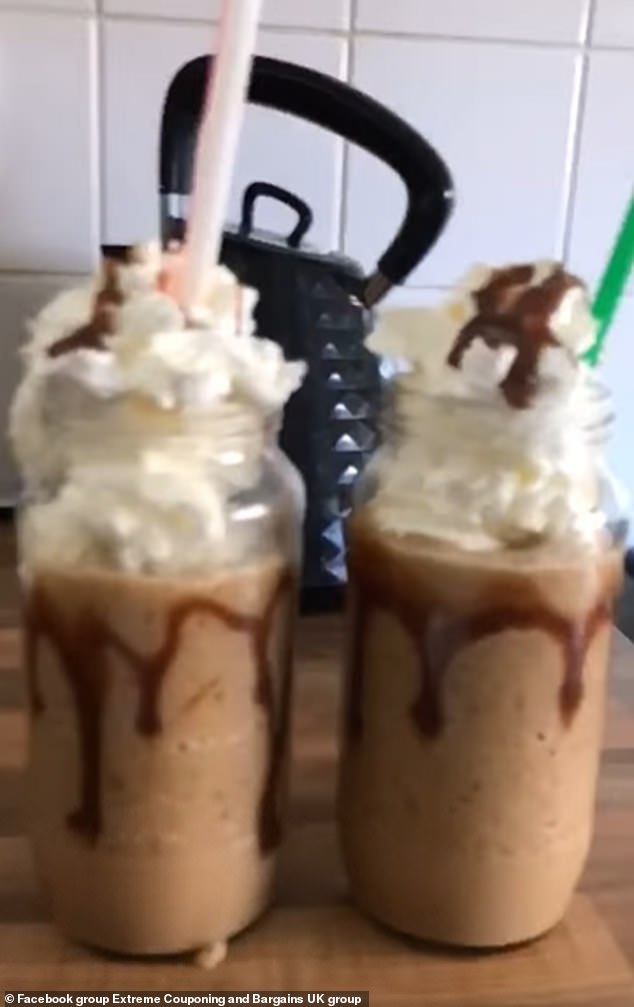 Once the consistency is right, finish it off with a squirt of cream, drizzle of syrup and some grated chocolate shavings (pictured)

The woman demonstrates how the first step consists of brewing the coffee and letting it cool to room temperature, before pouring the coffee into ice cube trays and placing in the freezer.

After they have frozen, place them into a blender alongside the almond milk, sugar, and chocolate syrup.

Next up, blend the mixture until the consistency is as thick or thin as you wish – depending on personal preference – and then finish it offer with a squirt of whipped cream, swirl of chocolate syrup and grated chocolate.

The post, which has since received almost 400 likes, has been inundated with comments from fans of the chain.

Taking to the Facebook group, the woman penned: ‘Thank you to whoever shared the McDs mocha frappe recipe. It tastes exactly the same! Maybe a little bit better’ 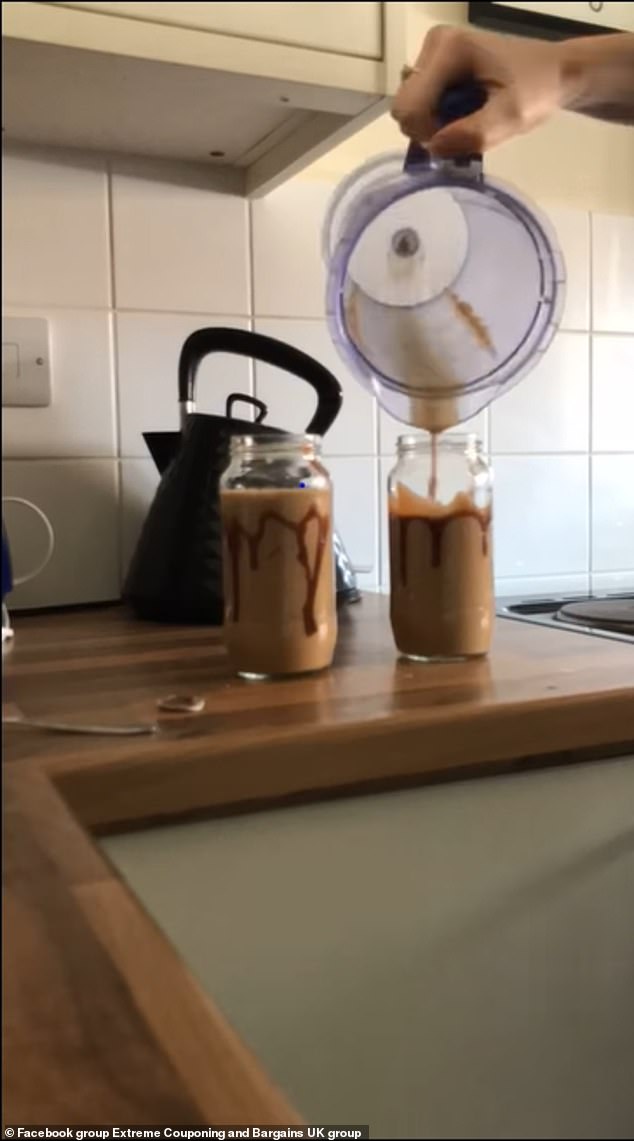 In the video, the woman drizzled some syrup inside the cups before pouring the frappe mixture in (pictured)

‘OMG that looks soo good,’ praised while, one a second tagged a friend and commented: ‘Why don’t you try this, sounds amazing and I don’t even like coffee haha.’

Meanwhile, others took to the comment section to reveal they had been inspired to create the tasty treat themselves.

‘Ohhh shall be trying this,’ commented one, while a second added: ‘I make these, as I don’t have dairy anymore, and missed them like mad!’

‘They were always my Achilles heal lol, but usually use ice cubes base from water! Never thought of freezing coffee! Totally going to try this way, worth a shot.’

Others who took to the comments section praised the appearance of the finished frappe and added: ‘OMG that looks soo good’ (pictured)