‘Why are men so GROSS?’ Women are horrified as many men admit they NEVER wash their hands after using the bathroom – and they’re STILL not doing it despite coronavirus panic

As coronavirus cases spread and the disease’s death count crawls upward, women are being left with one particularly disturbing discovery: A lot of men don’t wash their hands after using the bathroom.

One of the most repeated pieces of advice from doctors and other health experts in protecting against the disease is to wash one’s hands frequently.

But with many men admitting that, due to the virus, they’re making a new habit of washing their hands when leaving a restroom, women are expressing disgust and horror that they weren’t already doing so. 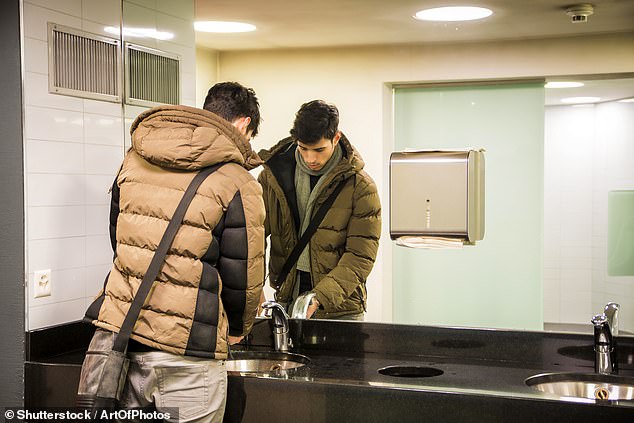 Ew! As coronavirus cases spread, women are being left with one particularly disturbing discovery: A lot of men don’t wash their hands after using the bathroom (stock image) 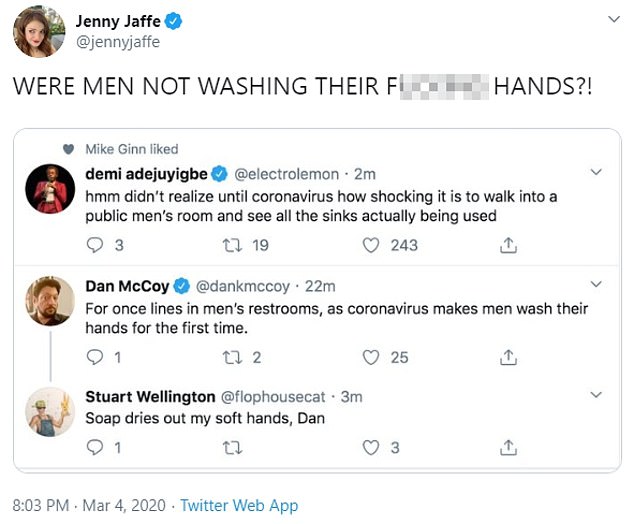 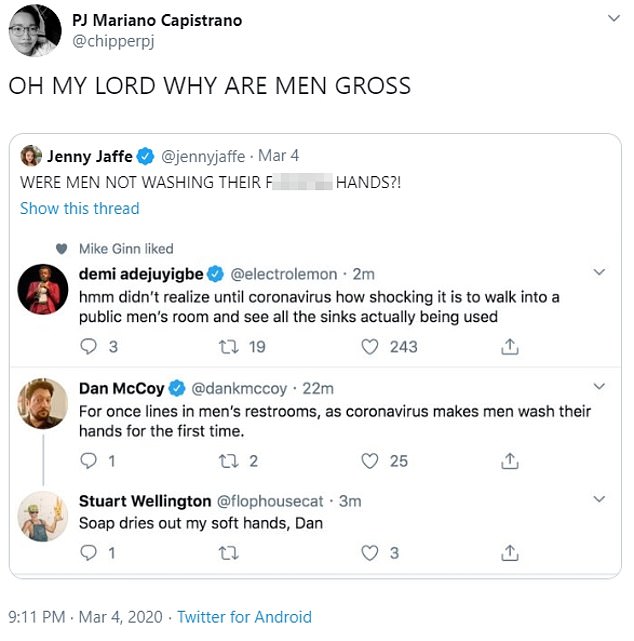 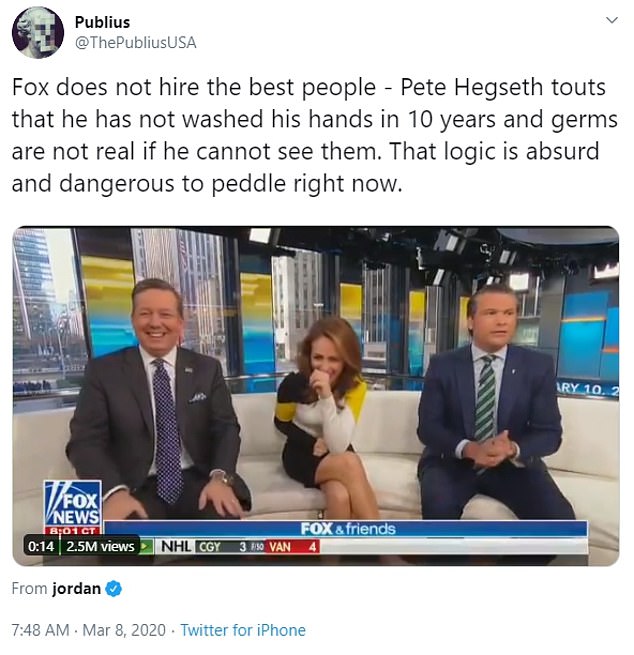 Come on, guys! Many are tweeting with shock and horror about the distressing fact

The fact that most men don’t wash their hands after doing their business isn’t actually new information — and there are statistics to back it up.

A 2019 study published in the American Journal of Public Health and cited by the Center for Disease Control and Prevention (CDC) found that only 31 per cent of men wash their hands in the bathroom.

That leaves a staggering 69 per cent who don’t.

Women, meanwhile, wash their hands at a rate of 65 per cent — or more than twice as many female hand-washers as men.

So it’s understandable that women assumed men were washing their hands as well, and have been shocked to learn that this isn’t the case.

‘WERE MEN NOT WASHING THEIR F***ING HANDS?!’ WHAT THE F***, GUYS?!’ asked one Twitter user, who screengrabs  several tweets from men saying they’ve noticed other men still not washing.

‘OH MY LORD WHY ARE MEN GROSS,’ responded another.

‘COVID-19 has revealed how many men have not been washing hands for years. Never shaking hands again,’ wrote another.

One even highlighted a clip of Fox News contributor Pete Hegseth from 2019, in which he says, ‘I don’t think I’ve washed my hands for ten years. Really. I don’t really wash my hands ever. I inoculate myself. Germs are not a real thing. I can’t see them, therefor they’re not real.

Thousands of women have expressed shock and horror on Twitter, with some calling men ‘gross’ and others wondering why men are so hygiene-averse.

‘Did society tell men that washing hands is gay?? Why the aversion?’ asked one. Another echoed the sentiment: ‘Fellas, is it gay to practice basic hygiene?’

Even men are complaining about it, with those who do wash their hands griping on Twitter and sharing stories.

Yikes! Some men who do wash their hands have complained about seeing men still not washing

‘All of this talk of washing hands to contain the coronavirus…just watched a guy walk out of the men’s room in the airport without even waving his hands at the sink,’ wrote one. ‘So, be sure to not touch the door handles either as you exit rest rooms. Use a paper towel.’

‘We had a meeting here at work for coronavirus concerns,’ wrote another. ‘And we have to clean our work stations 4 times a day. They emphasis on washing hands but I still see straight guys not washing their hands in the restroom. If it spreads it’s because of dirty ass straight men.’

And another wrote: ‘I think this is a good time to let you know that I became obsessed with proper hygiene as a young kid after reading a book with creepy pictures of germs, and TO THIS DAY, other men see me WASHING MY HANDS LIKE A HUMAN and call me a “germaphobe.”‘ 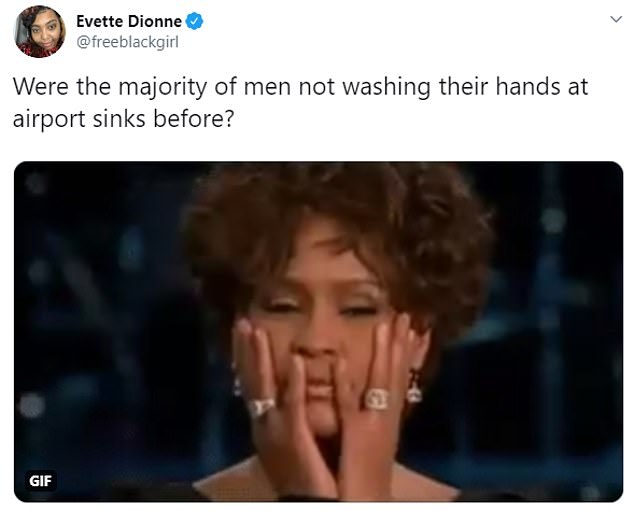 For your health! The CDC recommends washing hands with soap and water for 20 seconds at a time

What about washing bed sheets?

Most experts advise washing bed sheets weekly — but a new survey by YouGov found that only 39% actually wash them once a week or more.

Just over a quarter (28%) do so every two weeks, while 17% wash their sheets once a month or less.

‘Worked in bars for five years & noticed this. Also, many guys use their cell phones at urinals. I think it’s on the test of us to sever relationships w/ these ppl.’

Another man recalled: ‘A bartender told me once that he appreciated that I told him when the men’s room was out of soap because it showed that I wash my hands.’

There are even a handful of men still defending not washing their hands.

‘It’s worse to touch door handles and faucet than to simply skip the wash. In and out, touch nothing. That is what’s most sanitary,’ argued one.

The revelation has led some women to theorize that the reason there is always a line for the women’s room — and not for the men’s — isn’t because of urinals, but because women are washing their hands and men are not.

The CDC recommends washing hands with soap and water for 20 seconds at a time.