The holiday season is in full swing, which means it’s time to cozy up and watch all of your favorite Christmas classics! What better way to enjoy your favorite holiday flicks than eating the most memorable foods from an array of those iconic movie scenes?

Whether you’re craving a Chinese roasted duck like the one in “A Christmas Story” or Clark Griswold’s eggnog from “National Lampoon’s Christmas Vacation,” we came up with recipes inspired by those movies and more to fill your holiday appetite. 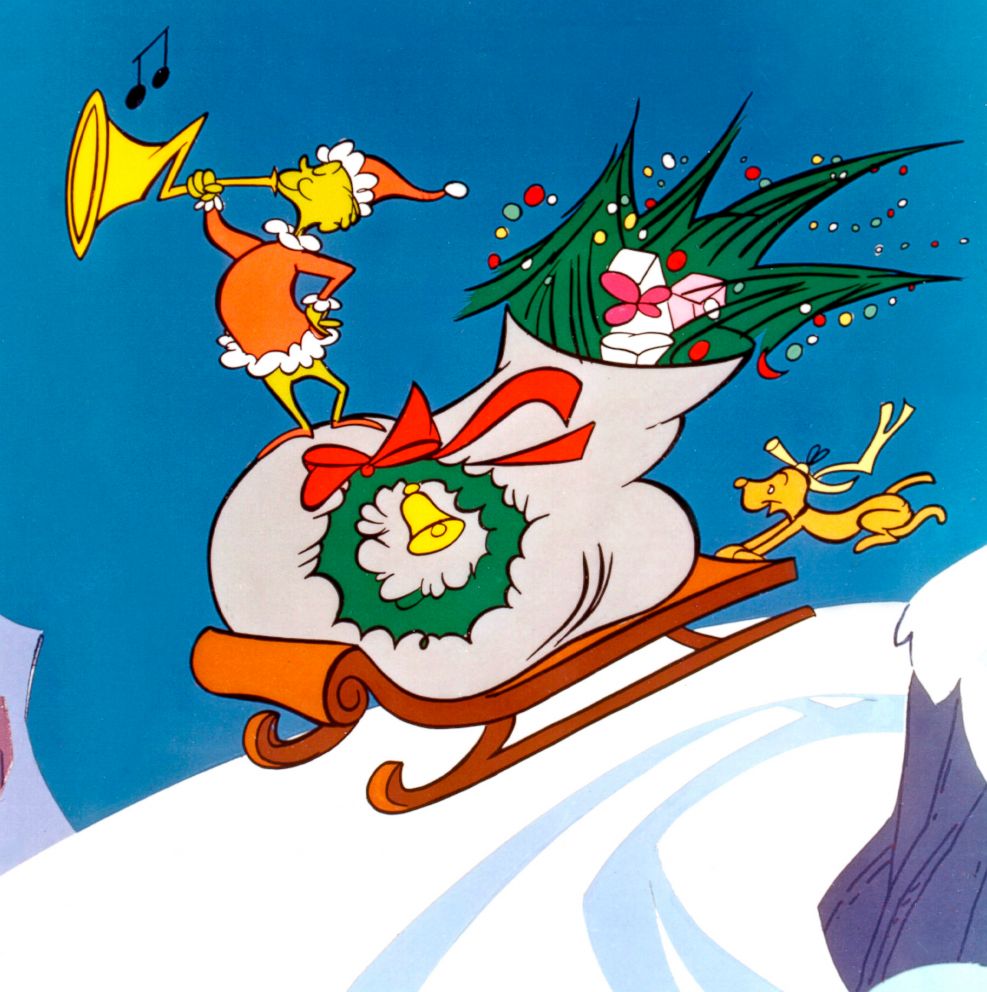 OK, so we don’t actually ever learn exactly what kind of meat the Whos are eating down in Whoville during their epic Christmas feast, but if we had to make it in real life, it would probably look something like this classic roasted beef tenderloin.

Even the Grinch himself wouldn’t be able to turn down Ina Garten’s slow roasted filet of beef!

I think we can all agree that other than the infamous leg lamp and Ralphie shooting his eye with his Red Rider BB gun, one of the most epic moments of this movie is the ending. The Bumpass’ hound dogs ruin the perfect homecooked meal, the family decides they’re “going out to eat” and wind up at Chop Suey Palace for Christmas dinner. And then the server presents a whole roasted duck. 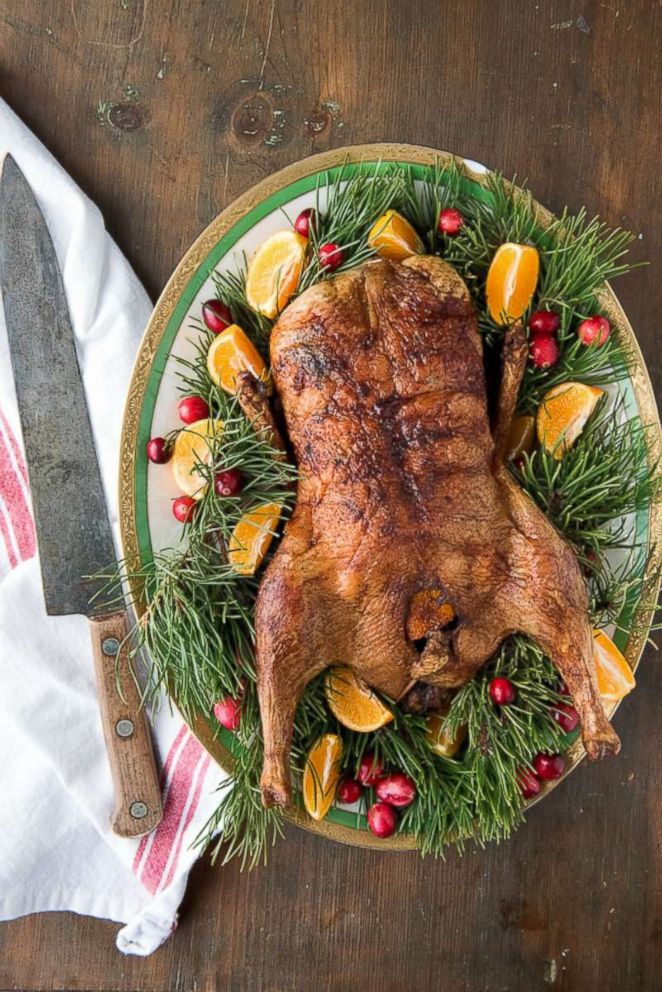 Eat like the Parker family with this Chinese five-spice roast duck recipe.

Just don’t accept any triple-dog-dares to lick a lamp post if it’s too spicy. 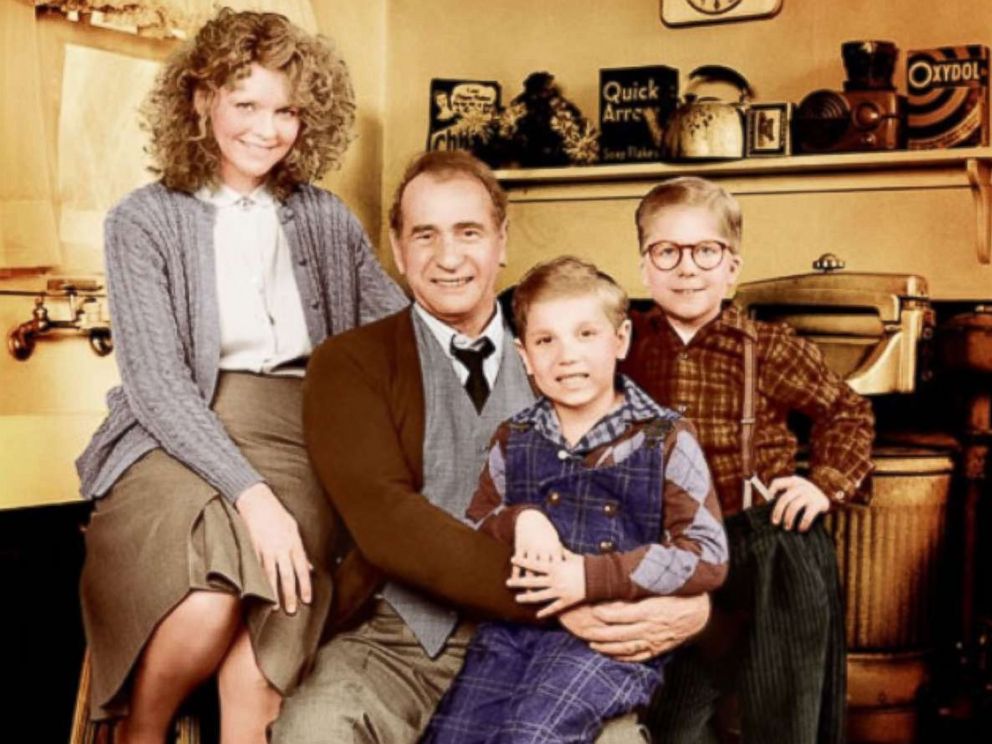 Kevin McAllister loves cheese pizza. And once his family accidentally forgets him in the first “Home Alone” film he pulls off one of the greatest hijinx of all, by using a movie scene to scare off the Little Nero’s delivery guy.

If you want to do it just like Kevin and order a New York-style plain cheese pizza, go for it! Or you can go gourmet and make Laila Ali’s recipe for a cauliflower crust cheese pizza.

I’d like to point out that before he eats the sundae, Kevin once again enjoys a large cheese pizza, this time in the back seat of a limo while he’s lost in New York. 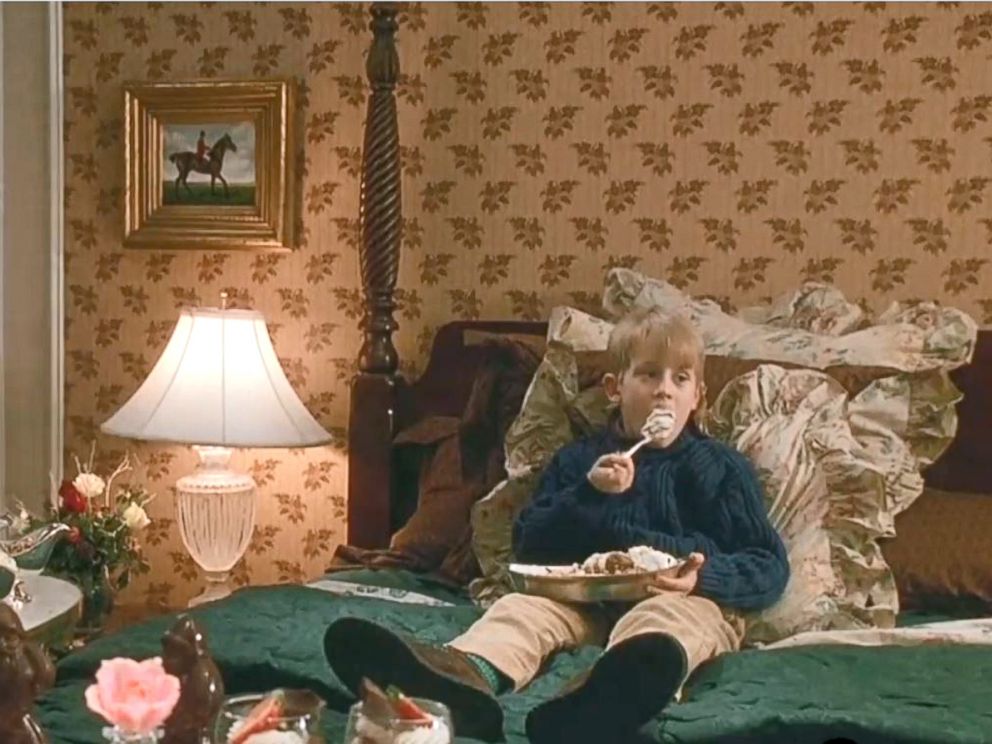 McCallister indulges in his favorite junk foods once again, this time ordering an extravagant ice cream sundae from room service while staying in the iconic Plaza Hotel. When the butler scoops the ice cream into his silver bowl Kevin quips, “Two? Make it three — I’m not driving.” 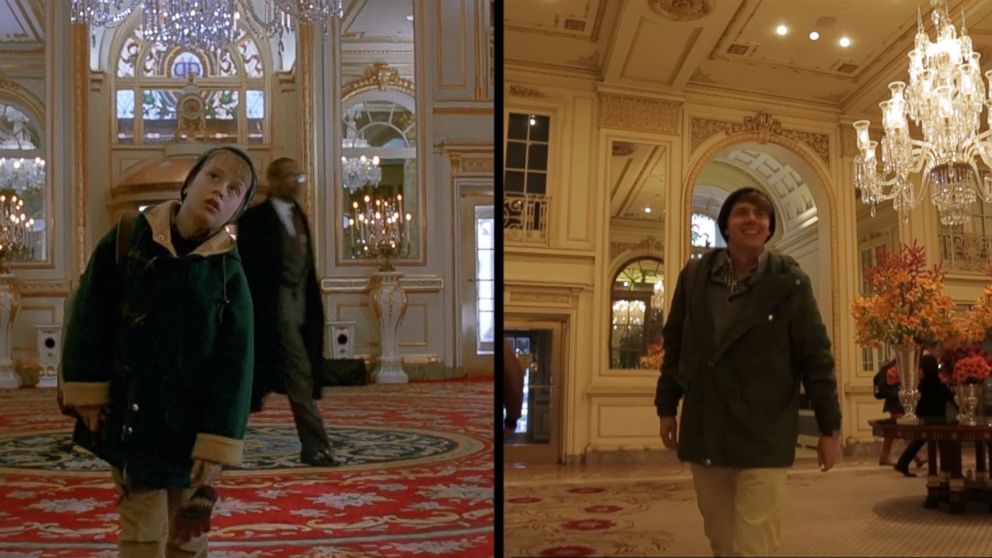 Want to make an over-the-top sundae of your own this holiday? Look no further.

Tyler Malek, the founder of the gourmet artisanal ice cream shop Salt & Straw, and his team created five delicious holiday-inspired flavors that a grown-up Kevin McAllister would definitely use for a modern ice cream sundae: Peppermint bark cocoa, apple brandy and pecan pie, gingerbread cookie dough and sugar plum fairy — made with plum jam and marzipan — would be as delicious in a cup, cone or sundae any time this season. 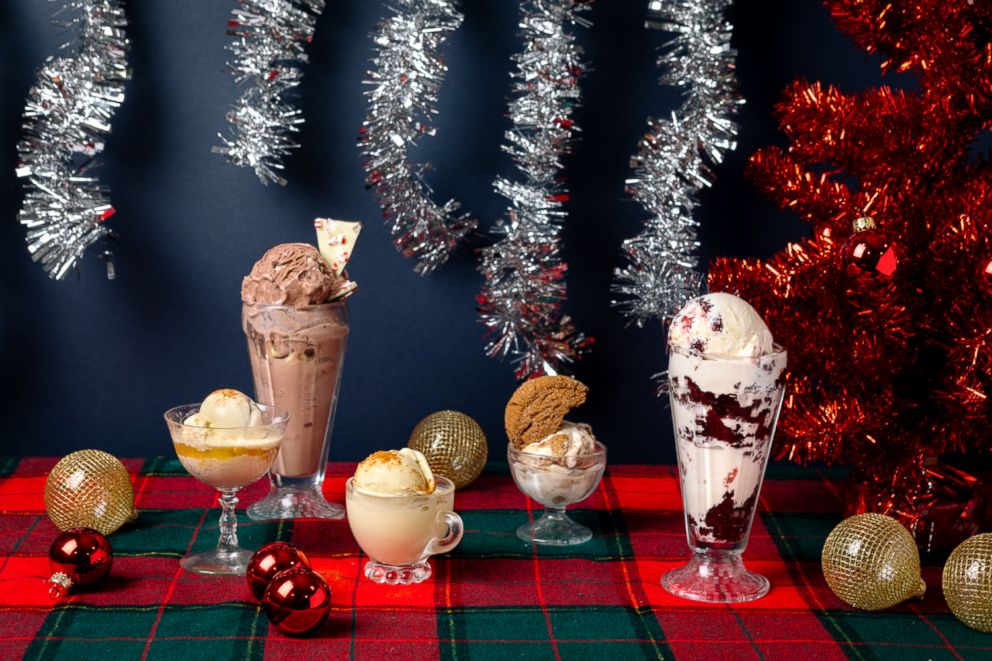 Malek told “GMA” that “Home Alone” was one of his favorite movies growing up and he dreamt up a super decadent sundae using Pepsi, chocolate sauce, and cherries — “[those] seem iconic to me from that movie.”

“This recipe will blow your mind but is incredibly simple it just requires a day in advance of preparation,” he explained. “I start with some good maraschino cherries, but pour out the syrup and replace it with a few spoonfuls of cane sugar, plus a can of Pepsi. Let the cherries steep overnight in the fridge. The next day, strain the cherry-infused Pepsi into a saucepan and boil the soda until it becomes a thick syrup and cool the syrup in the fridge.”

Malek suggests making a “chocolate magic shell” that can be prepped just before plating.

“In a glass bowl, combine half a cup of dark chocolate and half a cup of coconut oil, let [that] melt down,” he said. “I use just vanilla ice cream, really good quality. Then I drizzle the magic shell on top so it hardens. Add whipped cream, then the Cherry Pepsi syrup and top with five to eight cherries.”

Just in case this is still up for debate: “Die Hard” is a Christmas movie. (Don’t @ me.) For that reason, the bright yellow sponge cake and marshmallow fluff filled childhood snack is also on our list.

Sure, you can go buy a prepackaged one, (since Hostess is back in business) but turns out you can also make it at home with the right ingredients and some serious baking ambition. But it’s the holidays, go for it!

Here’s how to recreate a Twinkie at home. 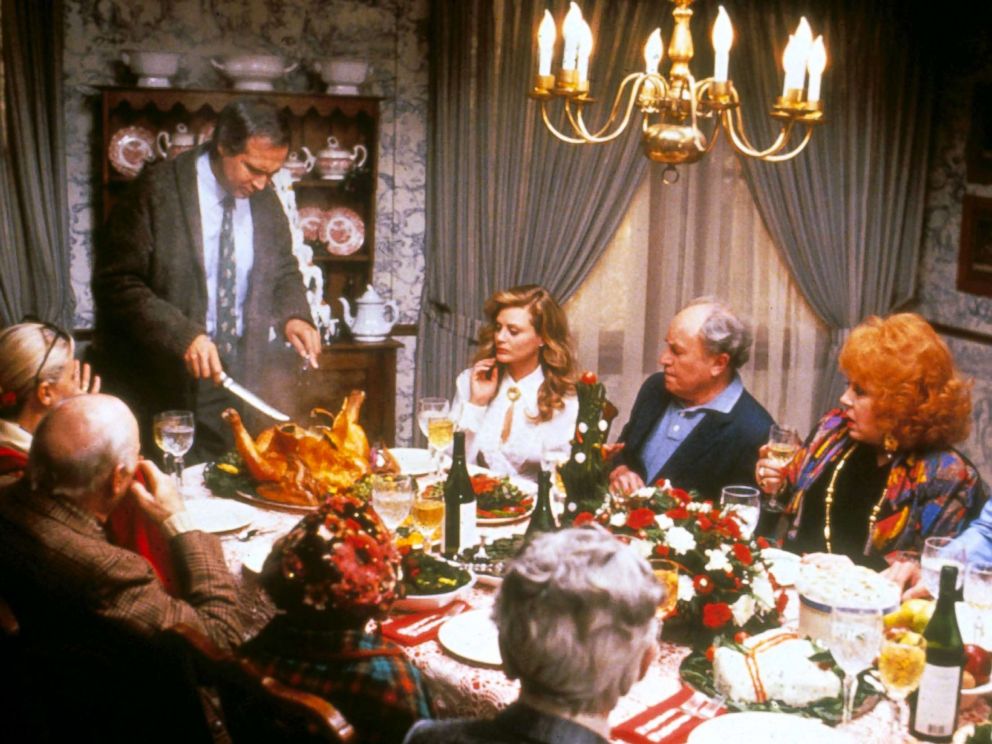 Who could forget when Clark Griswold sips on his yuletide beverage out of a moose glass with his cousin-in-law Eddie, who shows up unannounced? That beverage basically gets Griswold, played by Chevy Chase, through the outrageous antics of the entire movie.

Whip up a batch of the milk, sugar and holiday-spice-based beverage for a party — or anytime you’re having a Clark Griswold moment. 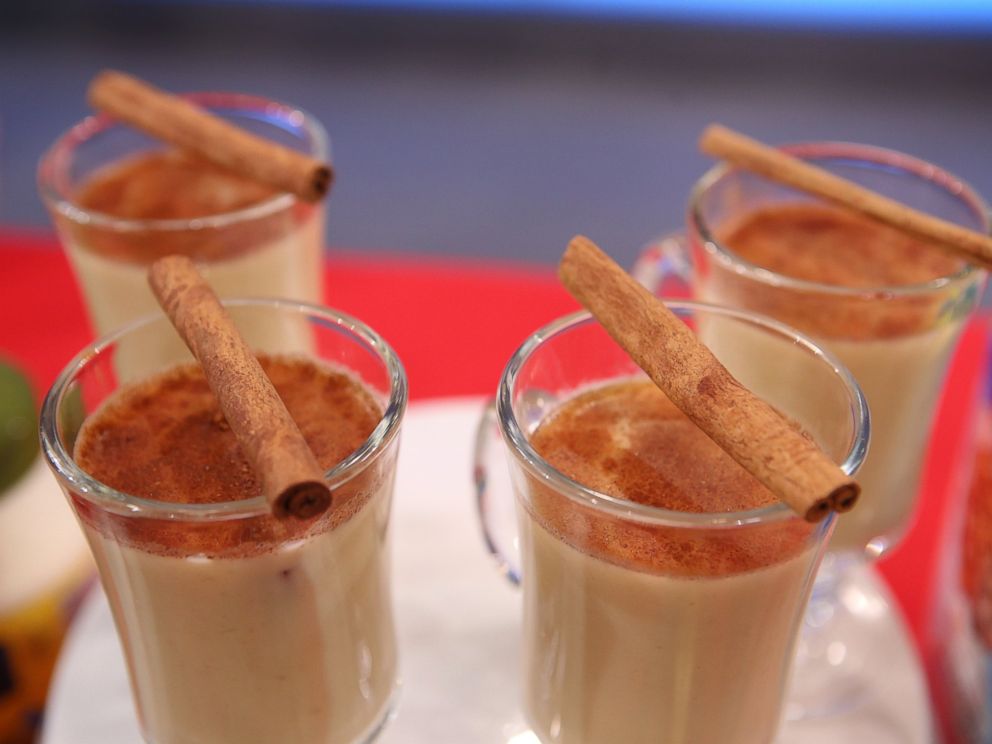 Check out this recipe for a dairy-free option or shake things up with an eggnog latte!

And if you don’t want your turkey to deflate on you like the Griswolds’ check out this recipe for a perfectly moist bird without the hassle.

The following films also have some mention of food, and my heart (read as “stomach”) may not be strong enough to try them, but these are the other Christmas movie meals worth mentioning.

Honestly, have never tried, but I hope someone else does. If it’s you — do share it with us!

‘The Holiday’: Frappuccino with a big or small dollop of whipped cream

When Jack Black offers Kate Winslet a frozen blended drink of some sort, he says she can choose, and as she reaches for the cup with more whipped cream — “Well hello big dollop!” (Editor’s note: This is my personal favorite line of the entire film.)

The pair also shares some delicious food during a Haunnukah dinner party scene and Black’s character says he’s “had too much of the Manischewitz,” referring to a kosher wine. Later in the scene, he says the brisket and coconut macaroons were “delectable,” but sadly we never saw those. 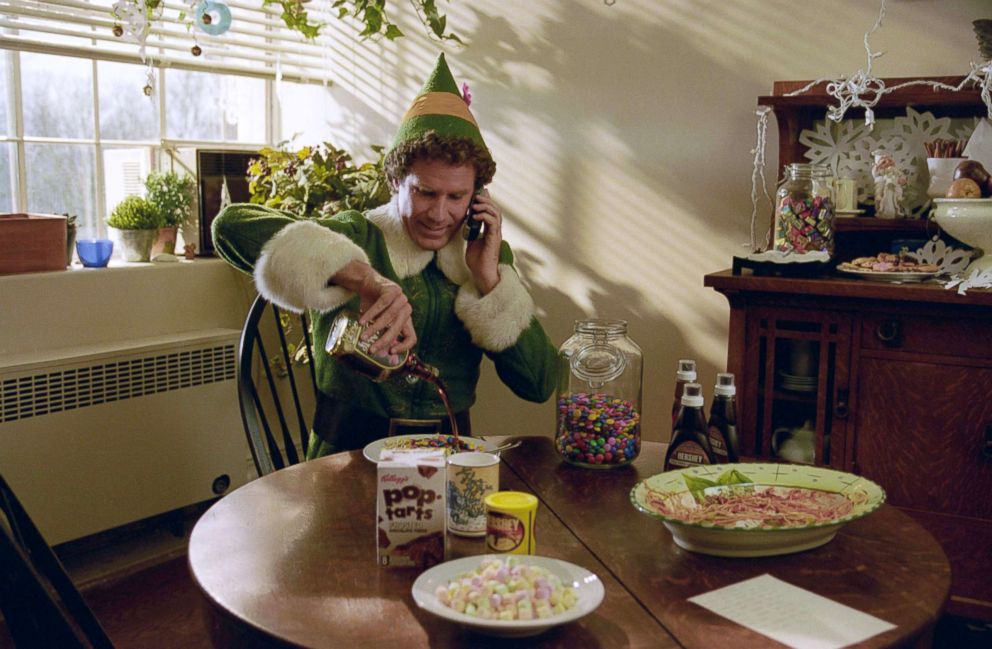 Will Ferrell’s character, Buddy the Elf, makes that monstrosity of sugar-infused spaghetti, topped with candy, Pop-Tarts and maple syrup. It’s not on my Christmas list, but, hey, to each his own.

Daring diners with an above average sweet tooth can go taste the dish in real life from executive chef Moosah Reaume at Miss Ricky’s in the Virgin Hotels Chicago. Available through Christmas Day.