Consumers are being warned of price hikes for fresh food if farmers cannot secure more workers to pick their fruit and vegetables, as the Morrison government promises action within days to fix the problem.

The nation's peak farm group issued the warning after the government aired its plans to offer foreign backpackers and young Australians new incentives to fill the farm labour shortage. 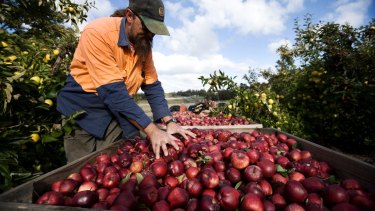 The government aims to encourage young Australians to do some of the farm work, but is yet to outline a new incentive.Credit:Louie Douvis

Agriculture Minister David Littleproud promised the new measures in the budget but came under attack from the Australian Workers' Union, which said the measures could force people into "slavery" on low wages.

National Farmers' Federation chief executive Tony Mahar said he was "encouraged" by the latest statements but he emphasised the "enormity" of the challenge facing farmers.

"It's possible the worker shortage could tighten supply with some growers left with no option but to plough ripe crops back into the ground," he said.

"We know that some farmers are planning to decrease the size of their next crop and some are even pulling out established trees."

"Unfortunately, a tightening in supply could see supermarket prices rise, at a time when many consumers can sorely afford it."

Deputy Prime Minister Michael McCormack confirmed some of the new measures on Wednesday, saying backpackers would gain a further extension of 12 months on their visas if they stayed in Australia to fill the regional jobs gap.

"We want to make sure that if those backpackers are now facing the prospect of having to leave Australia they can apply for an extension to that for the harvest trail."

While the government aims to encourage young Australians to do some of the farm work, it is yet to outline a new incentive after reducing the temporary coronavirus welfare supplement from $550 to $250 per fortnight.

The changes mean those on JobSeeker can receive $815 per fortnight including the supplement, and can earn another $300 per fortnight without losing any of the government payment.

Mr McCormack spoke of further incentives to be targeted at areas on the "harvest trail" where workers were needed.

"The farmers of Australia need you right now, so please apply, go, have a great time, earn some money. You may find the love of your life," he said.

Australian Workers' Union national secretary Daniel Walton said the changes were "a half-baked plan that is only designed to benefit one group of people – farmers".

"All it will do is exploit unemployed young Australians until the pandemic is over and then they'll go back to relying on an even cheaper backpacking workforce.

"The farming industry has gotten away for decades with exploiting and abusing workers and chronically underpaying them. This proposal just gives them the green-light to do this to a whole new generation of young workers."

"It's been making the announcements on this issue for seven years, but it still hasn't done anything," he said.

Mr Fitzgibbon said the fundamental structural problem in agriculture was the heavy reliance on foreign labour to fill about 50,000 jobs each year.

"We've got to get Aussies into this work, we've got to make it more rewarding, more interesting for young people," he said.

"We have to create a culture and a system in which they want to be there. That means some pretty serious work on some of the pretty complex problems."