In a universe where trolling has become so normal that world leaders and politicians think nothing of doing it to each other – both in person at state events and online via Twitter – it is somewhat reassuring to know some people still care about manners.

According to a survey of millennials – roughly those born between 1981 and 1996 – their top irritations include littering, playing music too loudly, using a mobile at the dinner table, and looking at your phone while talking to someone. 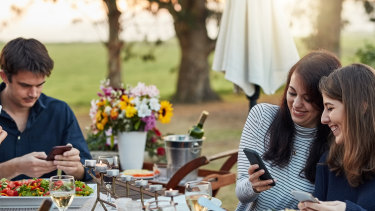 Phones at the dinner table are a pet peeve even for the generation who grew up with them.Credit:iStock

Also on the list: talking too loudly on public transport; reading other people's phone messages over their shoulder; "manspreading" on the train or bus; making a tea for yourself but not others; spoiling a TV show by revealing the ending; and finally, talking about politics too much (even if all the angry students might suggest otherwise).

On the last point, I would like to say to these young whippersnappers who still have lives outside of what they read in the news: you wait until you are married with children and have stopped doing anything quite so glorious as going out and having sex and enjoying yourself. Then you'll realise that politics is all you have to talk about.

But I digress. Interestingly, young people (and I am no longer a young person, as I was born exactly a year before the millennial cut-off) do not care any more for old-fashioned politeness such as holding doors open for a lady, or giving up your seat on public transport for the elderly or pregnant. Millennials are not bothered if someone puts their elbows on the dinner table, or if they don't put their knife and fork together when they finish their meal. (Are these people savages?)

They do not say "bless you" when someone sneezes, presumably because nobody in the UK has died of the bubonic plague now for several hundred years, and they are not interested in taking your coat, or putting their hands over their mouth when they yawn.

Apparently, none of them pull out seats for other people to sit down on any more, and nor do they avoid swearing in front of children or people they do not know. In short, young people care about rudeness – it's just that their definition of what is rude is different to the generations that came before them. It has ever been thus.

It is surely only a matter of time before Debrett's publishes a cross-generational etiquette guide, to help us all get along. For example, my friends, most of whom are Generation X-ers, find it rude not to talk about politics all the time. Honestly – you try and change the subject away from Brexit, because you are beginning to feel like a lobotomy might be a good idea, and you are accused of being uncaring and unthinking and, before you know it, they've unfollowed you on Twitter, which is basically the modern equivalent of striking someone from your Christmas card list.

I know there is no guidebook for life – my therapist tells me this regularly – but wouldn't it be nice if someone could at least come up with some basic rules for modern manners. Anyway, in the absence of this, I've had a go at coming up with some myself.

From now on, it will be unthinkable to offer guests a cup of tea without a full range of dairy alternatives: soya is a must, although the taste of oat is preferable, and please don't even think about offering me almond milk. Ever. Just no.

Please can we all agree that we won't read a WhatsApp message and then forget to reply to it? Or, even better, that we will stop communicating by WhatsApp, and revert simply to phone calls and texts or, I dunno, postcards.

Let's not be over-familiar with people we don't really know. For example, the other day I was introduced to a man at a party and he spent the whole evening calling me "B", as if he were my husband, or my parents, who are the only people permitted to be this lazy in front of me. It's three syllables, dude!

You will always wash out your yogurt pots before putting them in the recycling.

You will point in an exaggerated manner at your tiny in-ear headphones as I approach you to say "hello" so that I know you are on the phone and do not feel like an idiot when I throw my arms around you in greeting.

If in doubt: just be kind. Always be kind.