Six young girls dance in pairs on three separate video screens. Their wordless movements express a range of emotions from joy and playfulness to anguish and fear.

Disconcertingly, each of their faces is obscured by a mask or bandanna. We’re not allowed to know who they are because each of the youngsters has come from regions including the Middle East, Asia and the Pacific to seek asylum in Australia. 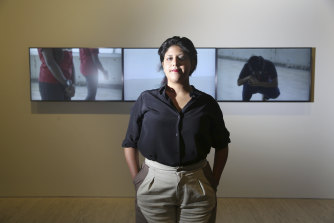 Claudia Nicholson in front of the video installation that she helped the youngsters create.Credit:James Alcock

The short video work is part of a collaboration between the Art Gallery of NSW and Newtown’s Asylum Seekers Centre called The Belonging Project, curated by Lisa Catt.

Artist Claudia Nicholson worked with the children over a number of weeks to make the piece, which is launched today, UN International Human Rights Day.

“I was born in Colombia and raised here and a lot of my work looks at that relationship between place and history,” said Nicholson. “I saw ‘belonging’ as a slippery word, I guess. When I think of belonging, for me it is tied to a sense of longing as well as feelings around displacement.”

When I think of belonging, for me it is tied to a sense of longing as well as feelings around displacement

Nicholson took pains not to impose her own ideas on the children during the workshop sessions.

“I wanted it to be led by them and not be this heavy overhang on the project,” she said. “Part of the process was working through what belonging meant to us as a group.”

One of the young participants described her excitement at being involved and the prospect of seeing the work in the art gallery.

“The artist made me feel very special because I got to work with people I’ve never worked with before,” she said. “Not only is it an artwork but it is an artwork that is going to be in the Art Gallery of NSW. It makes me feel happy and excited because I can’t wait for people to see out beautiful project.”

Each of the young people has a close relation in the group, which created an extra dynamic for Nicholson.

“There was a really beautiful physical language between the different siblings, these small movements that echo each other and talk to each other,” she said.

Asylum Seekers Centre chief executive officer Frances Rush was full of praise for the project and the growing relationship between the centre and the gallery.

She said asylum seekers were often confronted by the message that they don’t belong in Australia or somehow arrived here the “wrong” way.

“Actively pursuing a way that you can belong and have a voice that is not often heard articulated through art is a whole different way of engaging,” she said.

Another of the young dancers expressed herself even more succinctly.

“I think people should feel friendly [when they see the dance] because they should see that we need each other and that we belong to each other, like friends,” she said.