The dark side of YouTube fame: Blogger, 28, says she was left feeling suicidal and lost 1st in a week after trolls falsely accused her of selling used beauty products to her fans and said she should ‘kill herself’

A YouTube star claims she was left feeling suicidal and had to be put on watch by her GP after her product launch backfired.

Simone Partner, 28, from Bath, a beauty and lifestyle blogger who goes by the name Eltoria, has attracted over 218,000 followers on the platform for her videos, in which she unboxes advent calendars.

In November 2018 she decided to launch her own handmade seasonal calendars priced at £49 – but claims she found herself at the centre of a hate campaign instigated by other influencers whose false accusations spiralled out of control.

Eltoria was accused of duping her followers by selling ‘unwanted’ and ‘used’ products she’d received from beauty companies to review, and told how online trolls targetted her online. 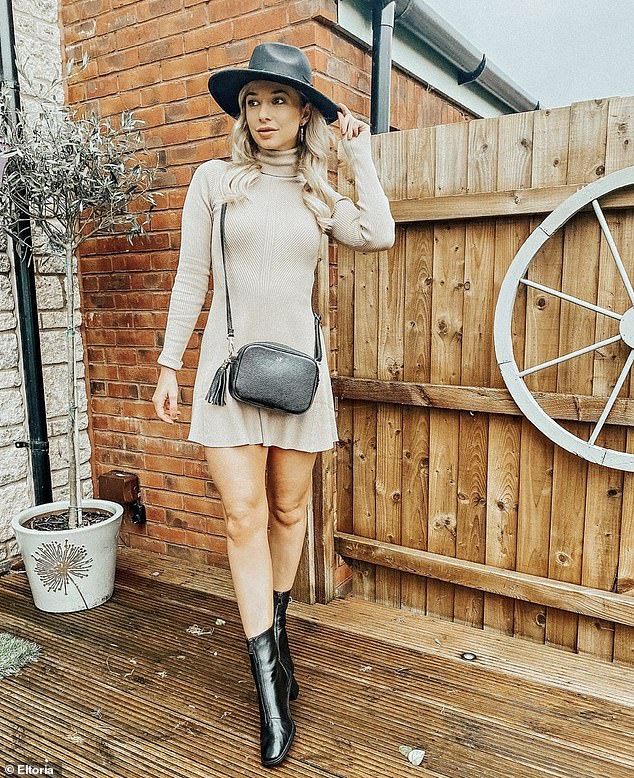 YouTuber Eltoria, aka Simone Partner, claims she was left feeling suicidal and had to be put on watch by her GP after her product launch backfired 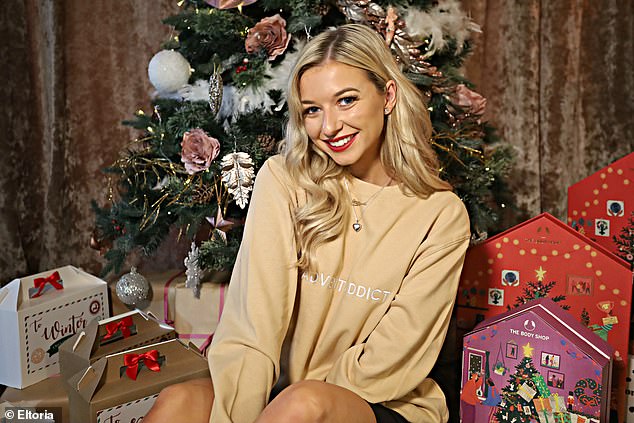 Eltoria has attracted over 218,000 followers on the platform for her videos, in which she unboxes advent calendars

She revealed she lost a stone in weight in seven days when the virtual abuse escalated, and her GP was so concerned about her she was put on health watch.

Now, two years later, Eltoria is keen to share her story ahead of Anti-Bullying Week to help other people who have been affected in a similar way.

‘People told me I should kill myself, that I should go to jail, to quit YouTube and that I was a scam artist,’ she told FEMAIL.

‘I lost a lot of work in the aftermath because of the untrue assumptions that were spread, and brands were unsure whether they wanted to work with me. 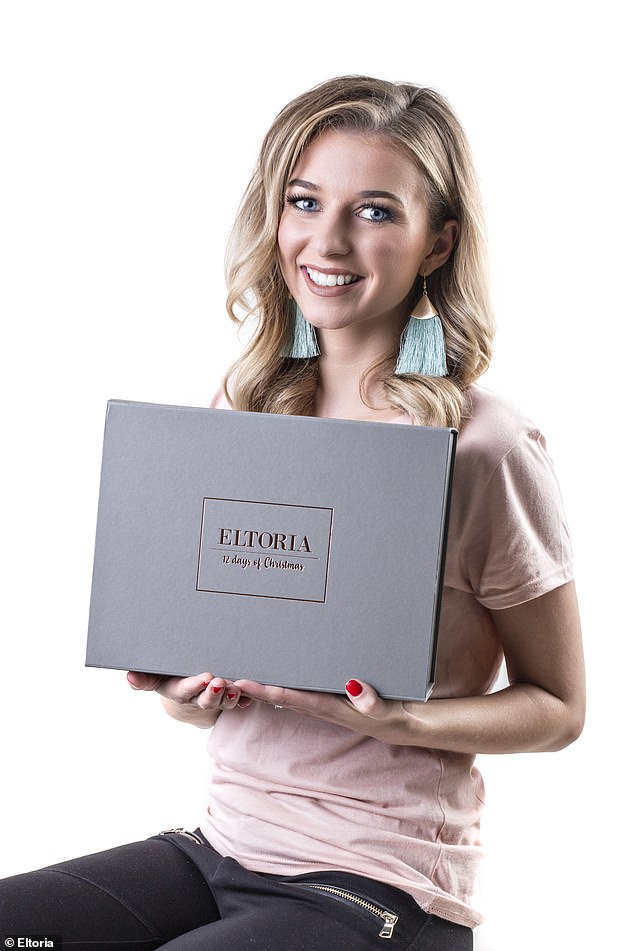 In November 2018 she decided to launch her own handmade seasonal calendars containing nearly £60 worth of products, priced at £49 – but claims she found herself at the centre of a hate campaign instigated by other influencers whose false accusations spiralled out of control 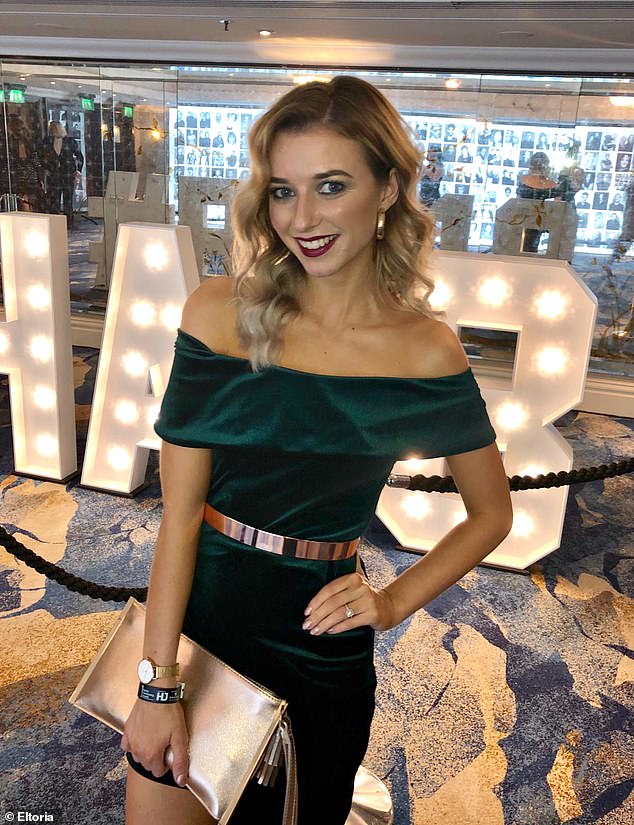 Eltoria lost a stone in weight (pictured) in seven days when the virtual abuse escalated, and her GP was so concerned about her she was put on health watch

‘It took me two years to recover my reputation that I worked so long to build up. People online don’t know how their actions can affect others, which is why I want to speak out for anyone else affected by online bullying.

‘I came out the other side stronger and so can you. No one at the time stuck up for me publicly. But a number of influencers reached out to me privately to offer their support, and I’m grateful for the life-long friendships that came out of the situation.’

Every festive season a wide range of brands give Eltoria first reveal of their newest advent calendar and the reviews are posted on her official YouTube channel.

Spurred on by people’s suggestions she should do her own advent calendar, Eltoria decided to give it a go – but was too late to team up with a retailer as they work 18 months in advance. 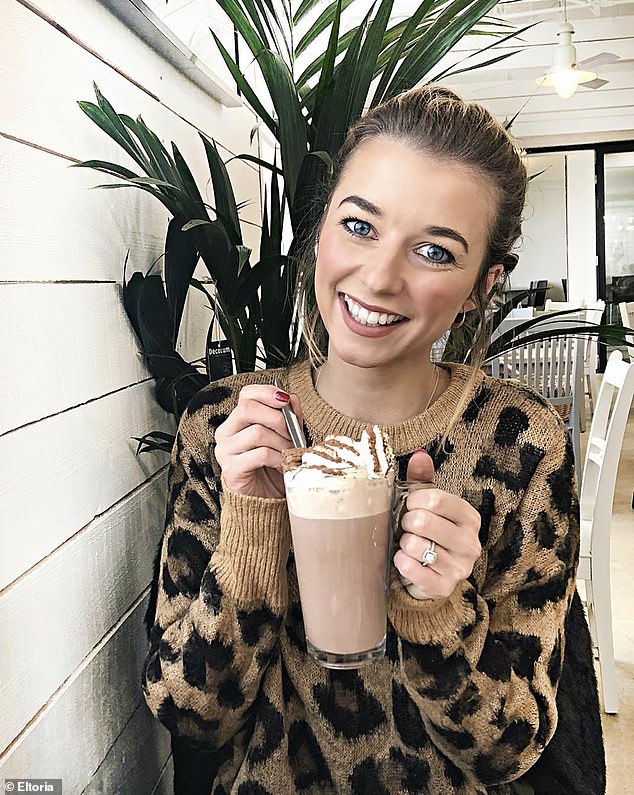 Pictured in 2018, shortly after the hate campaign, Eltoria said her fiance and sister sat with her to make sure she didn’t try to harm herself

‘I had this great idea of hand-making boxes with mystery products in,’ she recalled.

‘It was extremely time consuming and took me about two months, but I was really passionate about my little creative project and I genuinely thought the calendar was a nice thing to do.

‘I spent £2,000 and each product inside was hand-wrapped in bespoke craft paper with a handmade hot foil label on each of the 12 “doors”.

‘Every box had a personal touch and I included a handwritten card for each person. I reached out to some of my brand contacts to see if they wanted to be included and I had full permission for four beauty products.

‘The other eight products I either bought myself or collaborated with PR agencies and brands, who supplied a smaller number of stock, making the calendar “12 days of Christmas”. 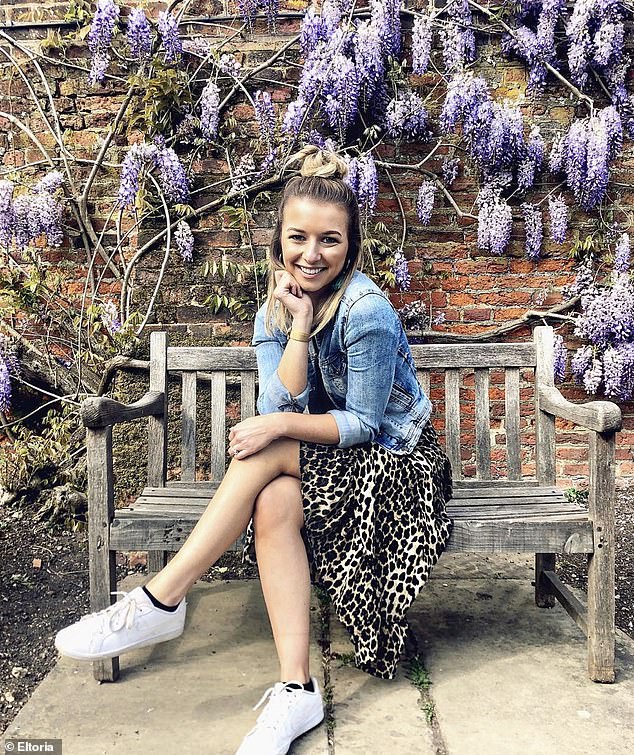 Creating her own calendar was ‘extremely time consuming’ and took Eltoria about two months, but she said she was really passionate about her creative project and genuinely thought the calendar was a nice thing to do 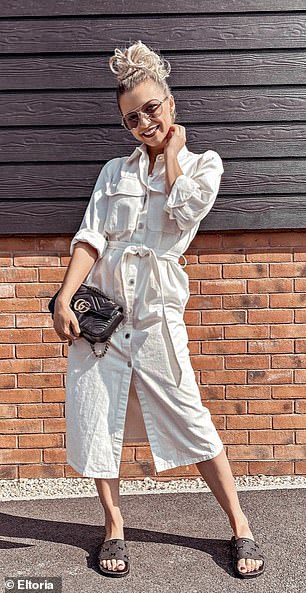 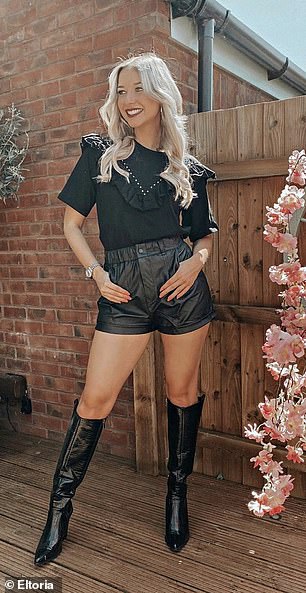 Within days of launching her calendar, Eltoria was accused of ripping people off by ‘selling them freebies and used products’

‘For the purchased products I wanted to support UK businesses so for two of the gifts I bought a handmade candle and a lip balm from local independent companies.

‘I was really excited to launch, and I had over 12,000 hits to my website in the first few hours.’

But within days Eltoria was accused of ripping people off by ‘selling them freebies and used products’.

She explained: ‘The backlash all started when a micro YouTuber with 3,000 subscribers bought the calendar and started spreading rumours that I had sold her a “used” jumbo pencil.

‘What they didn’t reveal was that jumbo pencils actually come with a butted edge, that is how they are made, it was not a used product but a manufacturing design.

‘But it sparked rumours which caused lots of trolls to attack me online.’ 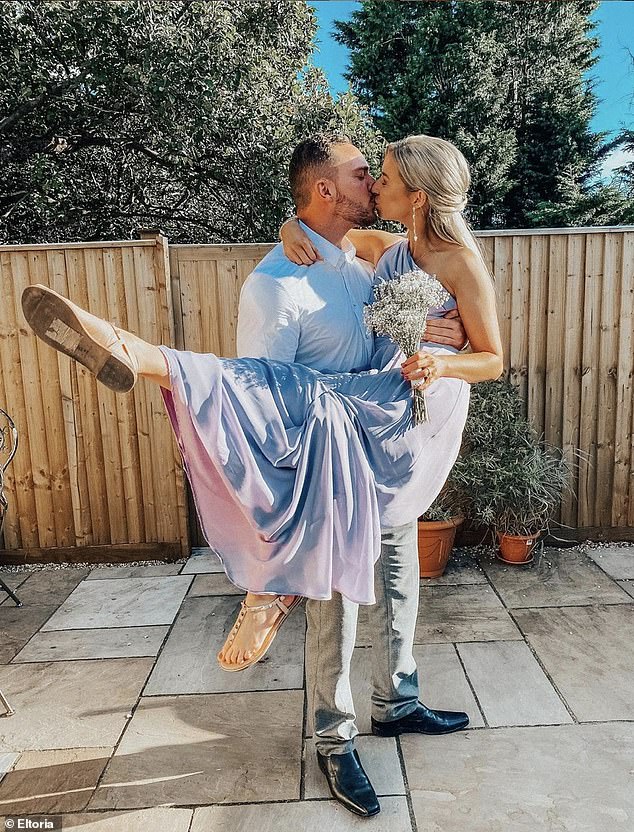 Eltoria said the YouTuber in question usually received a few hundred views on their videos, but the one in which they gave a scathing review of her calendar topped 200,000.

She claims the real damage was done when a higher profile YouTuber saw the video and shared a negative review which was watched over a million times.

Eltoria said she pleaded with them to hear her side of the story, but claims her feelings were dismissed.

‘[The YouTuber] is supposed to be a mental health ambassador and even went so far as to say, “I won’t be made to feel a video (which is my job) is the reason for somebodies’ suicide”,’ she claimed.

‘This YouTuber did what they did for self-gain and what they said was absolutely disgusting. People need to be held accountable for the content that they produce online, and it should be no one’s “job” to ever make anyone feel like the way I did.’ 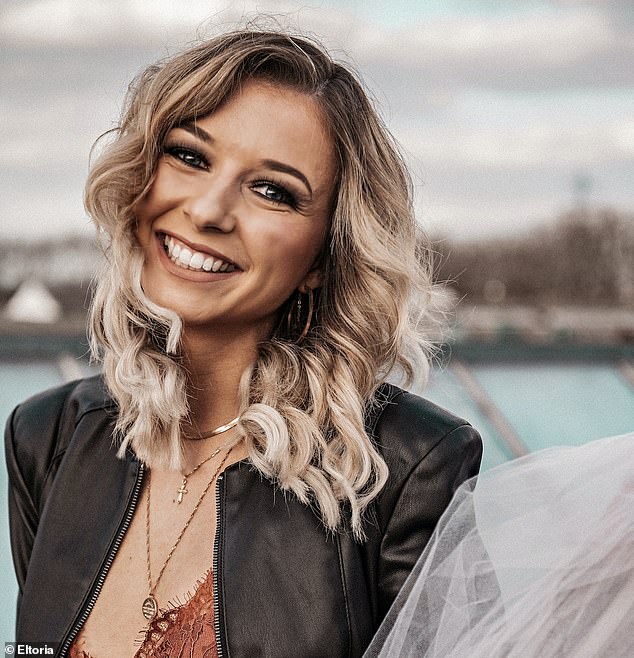 Eltoria said she pleaded with the YouTuber to hear her side of the story before sharing a negative review, but claims her feelings were dismissed

Eltoria said the negative review video plunged her into a ‘world of hate’ and the backlash she endured made her physically sick.

‘I lost approximately a stone in a week and went to the doctors bawling my eyes out. I was so close to doing something and I never thought I would ever say,’ she said.

‘I was put on anti-depressants and on watch by my GP. The whole thing was just so heartbreaking, I had spent years building up my career and reputation and for it all to be destroyed by one nasty assumption.

‘At the time I thought I could never come back from it and my career was over, hence why I was willing to resort to extreme measures to take away the immense pain.

‘My fiancé Joe was a pillar of strength and my sister came down from London to sit with me as she was so worried.’ 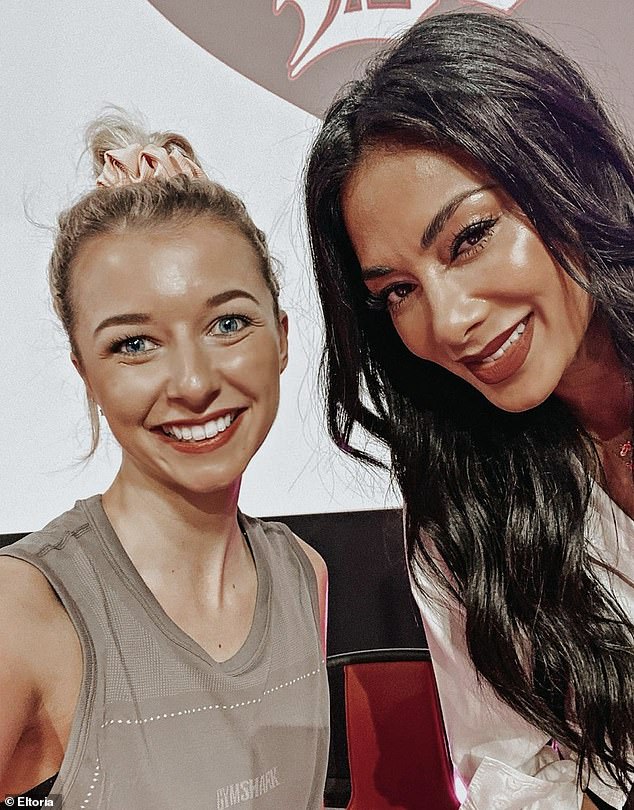 Eltoria said she wishes she’d never launched her bespoke calendar and was naive about her online influence.

She added: ‘I’m very cautious of what I do and say now online as things can be taken out of context so easily and once a rumour starts spreading it can be hard to stop.

‘I haven’t let the situation deter me from doing what I love to do and I still really enjoy unboxing advent calendar videos. I’ve launched a personalisation brand called Darling It’s Yours – it’s all gone nice and smoothly and we have had over a thousand very happy customers so far.’

If you have been affected by online bullying visit anti-bullyingalliance.org.uk/anti-bullying-week