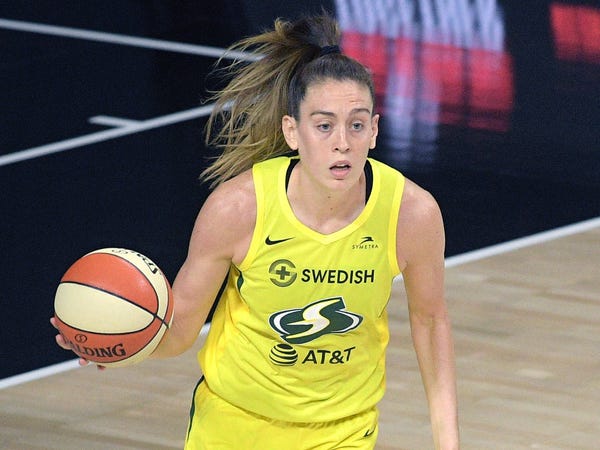 And when all was said and done — and maybe even a bit before then — the 6-foot-4 superstar was ready to celebrate the feat.

After averaging 28.3 points per game on 62.8% shooting from the field and a 65% clip from three-point range through the Storm's three-game sweep of the Las Vegas Aces, Stewart arrived at her postgame media availability sporting a brand-new Seattle Storm-branded 2020 WNBA Finals champions t-shirt, ski goggles, and a full bottle of champagne.

The 26 year old insisted on keeping the goggles on throughout her conversation with members of the press, during which she discussed her own resiliency and what it means to win her second championship — and second Finals MVP award — of her career.

Stewart is less than two years removed from one of the most devastating injuries a professional athlete can endure. While competing for a EuroLeague championship in April of 2019, the two-time WNBA All-Star tore her Achilles tendon. She rushed home to the states, went under the knife, and rehabbed for almost an entire year before returning to the court — missing the entire 2019 WNBA season in the process.

"You know, I remember where I was last year during the WNBA Finals, and I was in North Carolina with my family, and it was hard for me not to be upset because I wanted to be a part of the league," Stewart said after Tuesday night's victory. "Obviously I wanted to be with my team and have the opportunity to be back and defend our title. To be able to be here, to get through all that we've gone through as a team [and] obviously individually, it's an amazing feeling."

Somehow, Stewart came back even better than before — and her level of play prior to the injury was already amongst the most impressive in the WNBA. During her sophomore season in 2018, the Connecticut Huskies product was the league's MVP and won her first WNBA championship in addition to her first Finals MVP honor.

Gary Kloppenburg — the Storm's head coach for the 2020 season — noted during his media availability that his star improved in nearly every statistical measure after returning from an injury that is notorious for ruining the careers of many standout athletes. But Stewart insisted that, despite all the accolades, she just "wanted to win a ring, and that was the priority."

"Whatever else comes, comes," Stewart said. "But getting another ring, getting another opportunity to play
with Sue was what was most important, and whether [her Finals MVP award] was unanimous or not, who cares."

She was more than ready to drink to that. Throughout her time with the media, she swigged from her champagne bottle and appeared eager to rejoin her teammates to restart the party. And when she was asked if she planned to "pop a few more bottles or FaceTime some family," Stewart was remarkably candid in her response.

Stewart then asked if she was done speaking to the press — she was — and then headed off to party once more. But after a few minutes lapsed and Seattle legend Sue Bird was in front of the microphone, the superstar returned to crash her point guard's media availability.

The Syracuse native dumped green and gold confetti onto Bird's lap before jumping into the frame and asking why the 11-time WNBA All-Star hadn't had more to drink. Bird laughed and gestured to the camera, noting that she was still answering questions, when Stewart called upon the Storm's Communications Coordinator — Hailey Robinson — to cap Bird at "one more" question.

Stewart has plenty to celebrate. During the first game of Seattle's series against the Aces, she posted the first first 35-point, 15-rebound performance in WNBA Finals history and became just the fifth player in the history of the league to win multiple Finals MVP awards.

But beyond all of her individual achievements, Stewart was most keen on celebrating her team's tenacity through what was undoubtedly one of the hardest and most unique years the WNBA has ever seen.

"This season wasn't easy, and it wasn't easy in a whole bunch of different areas, with the coronavirus, with the
social injustices going on in this country and the day-to-day being stuck here in the bubble," Stewart said. "But our team is resilient. We continued to keep going, no matter what's going on, and I'm super proud to kind of be a
part of this.

"This one is different than 2018, but it was harder and it means more," she added.