As the cars take to the track for this weekend’s British Grand Prix, the drivers will be supported by hundreds of people at the track and hundreds more back at the team factories.

Teams have their factory operations all over the world, usually where the team is based, like Ferrari in Maranello, Italy, and Mercedes in Stuttgart, Germany. For the Racing Point F1 Team, which is English, its home is Silverstone.

But having this week’s race adjacent to its home base makes very little difference to the track workers. They may be sleeping in their own beds, but they are still working remotely with their factory-based colleagues, who work in a room near the track that the team calls Mission Control.

[Read more on how the British Grand Prix will stay at Silverstone through 2024.]

I was invited to watch the Spanish Grand Prix in May from that room, getting a close look at the coordination between Mission Control and the track. Inside are 10 large TV screens on the wall, showing the broadcast of the race and a host of data — tire types in use, weather, track temperatures and lap times. In front of the screens are three engineers, with 13 computer monitors of data.

It is important to understand that a modern Formula One car is more computer than machine. While cornering at speeds more than 200 miles per hour, each car is also logging terabytes of data, keeping the team abreast of the degradation rates on the tires and of the health of various mechanical components, and recording the drivers’ steering, braking and throttle inputs.

With about four terabytes of data per car per race, and additional terabytes from practice and qualifying, teams spend significant time on data analysis. 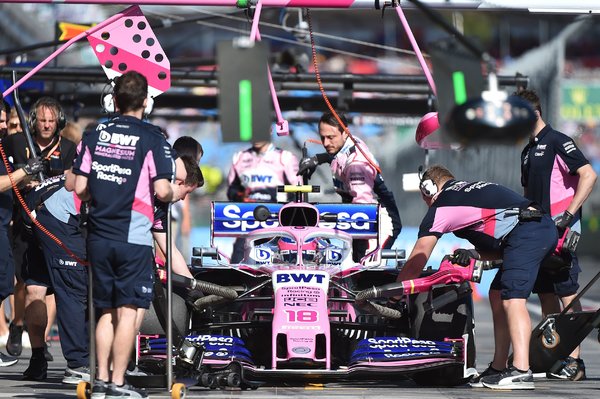 During each of the three practice sessions during a grand prix weekend, teams and drivers work to finesse the ideal configuration of their cars for the circuit, balancing the need for speed in qualifying with performance during the race. Drivers work closely with their track team, led by a senior race engineer, to improve that performance.

Workers at the factory became more important after regulations aimed at reducing costs were introduced in 2008, which put a cap on the number of people allowed to travel to the races.

With only 60 slots available at the track, down from 100 for some operations, teams increased the number of workers at the factory, which was not limited by the new regulations.

The regulations also reduced the amount of time cars could be tested on the track and in wind tunnels. Teams were already using computers to design their cars, and some testing was taking place on simulators before components were brought to the track and tested on the real racecar.

The rule change came when simulation technology was improving and became an alternative to real-world testing. Teams became more adept at learning from their simulators and applying the lessons to their cars.

Having an operations center, or virtual garage, at the factory became a competitive advantage, and then essential. Teams were already working with technology companies in sponsorships and technological partnerships, and running a virtual garage with a tech partner was a logical step.

The Mercedes Formula One team also uses their virtual garage as a perk for sponsors, inviting them to see the action and has previously worked with its partner Bose to create a copy of its Formula One garage for fans to experience. McLaren’s virtual garage uses technology supplied by its partner Dell, and provides sponsor engagement. Racing Point’s Mission Control was developed with their partner Acronis, a technology company specializing in data storage and security.

Watch any grand prix and you will see team bosses sitting on the pit wall or in the garage, staring at banks of screens and issuing instructions over radios. Those bosses are the public faces of the data flowing in from the factory.

Race day is actually the quietest of the weekend. At Mission Control, it is busiest during practice sessions, when data is coming in from that weekend’s circuit and from a simulator in a nearby building. The engineers in the factory share screens and information with their track colleagues and advise on new configurations to try, based partly on data coming from the simulator.

“During the race, it’s mostly at the circuit,” said Mike Beeson, head of software development for the Racing Point team. “The stuff that happens here in Mission Control, in the factory, is more Friday and Saturday. On Friday, there’s a lot of engineers working on data to try and get the car set up. There’s a lot of data throughout the whole weekend, but we’re really looking into it on Fridays.

“On a Sunday, during the race, we’re basically trying to provide another pair of eyes to the guys at the track, because we can see more here than they can. We’re limited in the number of people we can send to the circuit; we have people here looking at data, watching what’s happening in the race.”

While drivers are often asked to give input on whether to pit, sometimes a team will call their car in unexpectedly, because an opportunity to jump a rival in the pit stops has been spotted. Alternatively, a driver might be asked to run longer than planned, with a view to capitalizing on the timing of another car’s stop.

To pull off what are called “undercuts” and “overcuts,” a team needs to be anticipating and reacting to the strategies of the other cars, not always those near them on the track. Having Mission Control monitoring the data allows it to pick the correct strategy for the track-side teams.

The virtual garages have become so vital that their success has threatened their future. After long spells of dominance by Mercedes and Red Bull, Formula One wants to improve the action on track by reducing potential competitive advantages, like the virtual garages.

New regulations are under discussion for 2021, and they are expected to include a budget cap to try make the sport more competitive among the teams. That could force them to reduce their use of virtual garages, the thought being that fewer eyes trying to make the race perfect should make for more exciting action on the track.