Shortly after arriving from abroad last month, Kent Allen’s new patient spiked a low fever. The doctor inserted a sterile swab into his patient’s nostril, a P.C.R. test to determine if this was yet another case of a potentially deadly virus sweeping the globe.

Then the patient went back to eating his hay.

The gray Irish Sport Horse, named McCoy, tested negative for an illness currently devastating European equestrian sports. An outbreak of a neurological form of the common equine herpes virus has killed nearly 20 horses and sickened over 100 more. It has forced the shutdown of competitions across 10 European countries.

With eerie echoes of the human coronavirus and the current pandemic, the virulent equine virus, which can kill a horse in less than 24 hours, has raced through the sport horse industry at a time when experts say it can least afford it: The shutdowns to stop the spread of the virus, known as E.H.V., come after nearly a year of shutdowns in the face of Covid-19. The coronavirus closed barns and canceled international championships, including last year’s World Cup Finals for dressage and show jumping, an important Olympic proving ground.

The event was to take place this week in Gothenburg, Sweden. Instead, on March 12, it was canceled again.

“On the back of Covid, which is of course still having a devastating impact worldwide, this E.H.V.-1 outbreak has been particularly tough,” Goran Akerstrom, the veterinary director of the Fédération Equestre Internationale, or F.E.I., the international governing body of equestrian sports, said in an email. “Particularly for those that have lost horses.”

He added, “To lose the F.E.I. World Cup Finals two years in a row — and to two different viruses — has been incredibly hard.” 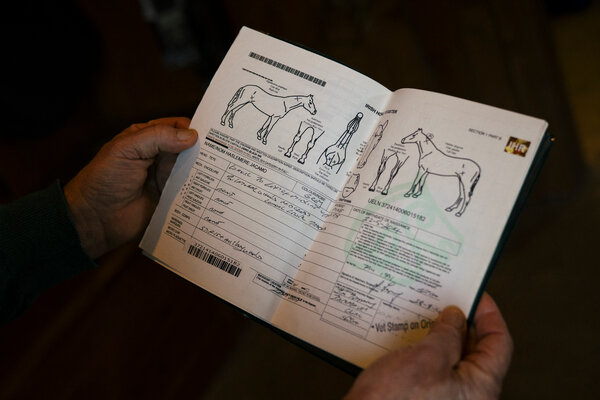 The outbreak began at an international competition in Valencia, Spain, in late February, killing several top German show horses on the grounds. Organizers locked down some of the 752 animals in attendance, but some riders had left with their animals for their home countries — unwittingly taking the virus with them. The virus has since been identified in 10 nations — Spain, Italy, Switzerland, Germany, France, Belgium, Denmark, Sweden, Slovakia and Qatar — possibly linked to the Valencia event. The United States has been spared, so far.

“I still can’t believe that we had no opportunity to help you,” Tim-Uwe Hoffmann, a German rider, wrote on Instagram in tribute to his mare, Casta Lee FRH, who died after testing positive at the Valencia show.

The F.E.I. has ordered international competitions on mainland Europe shut until at least mid-April. Nearly 4,000 horses who were in contact with potentially contagious animals after the show in Valencia have been ordered isolated for 21 days by the federation, which is conducting a sweeping test-and-trace initiative across European farms. After the isolation ends, they must return a negative P.C.R. test to return to competition.

“It was basically a textbook superspreader event,” Allen, McCoy’s owner, said of the Valencia competition. Allen is a veterinarian based in Middleburg, Va., who also serves as the F.E.I.’s head veterinarian for the United States.

The equine herpes virus is not a new enemy; it is endemic in the horse population and typically manifests as a runny nose and fever. But the version that has raced through barns after the Spain outbreak is far more deadly. It invades the central nervous system and causes myeloencephalopathy, or inflammation of the brain and spinal cord. The death itself, veterinarians say, is swift but brutal.

Biosecurity can be difficult: Shed virus can be spread by touch, on clothing and down a barn aisle by a snorting horse. While horses are routinely vaccinated for herpes, which affords some protection, the vaccine does not necessarily stop them from shedding virus. The virus can incubate in an animal for nearly a month, causing no signs of distress. Sick horses can test negative; asymptomatic horses can spread the disease.

For years, competition organizers and riders have largely paid lip service to biosecurity measures like sanitizing shared areas and keeping foreign animals apart, according to veterinarians and show staff. Pathogens are spread readily in a sporting environment where horses routinely swap stalls when stabled at competitions, nibble the same grass and touch noses beside the arena.

“You’d talk biosecurity measures, and their eyes would glaze over,” Allen said. “It’s: ‘You send us that protocol, and we’ll shove it in the deepest depths of our filing cabinet.’”

But the trauma that humans have experienced for the past year may be their horses’ best defense: After over a year of social distancing, vigorous hand washing and masking, industry leaders say, the equine world is stepping up to stem the spread in a way that it did not in past outbreaks, such as one in Ogden, Utah, in 2011, which reached at least a half-dozen states before it was quelled.

“In today’s climate with the Covid-19 pandemic, people are very aware of the need to practice biosecurity measures for themselves and were primed to take additional steps to keep their horses safe when protocols were recommended,” Stephen Schumacher, the chief administrator of U.S. Equestrian’s equine drugs and medications program, said in an emailed statement.

Those steps stateside have so far appeared to ward off an American outbreak. But the specter of the disease, which gets little reaction most years when it crops up, has set the American industry on edge.

In early March, at a competition at the World Equestrian Center in Ocala, Fla., news of a virus case in a horse that had competed at the facility sent frissons of anxiety through competitors, hundreds of whom had flocked to the show grounds, which opened this season for the first time.

Though there was no outbreak on the grounds, entries plummeted to 500, from over 2,000, shortly after the show alerted competitors about the ill animal, as riders packed up their horses and left, according to Larry Wexler, the competition’s official veterinarian. The entries have since rebounded. Through a publicist, an owner of the center, Roby Roberts, declined to comment.

This month, a quarter horse, a warmblood and an Arabian from separate stables in California tested positive for the neurological form of the virus, according to the Equine Disease Communication Center, exposing dozens of their stablemates. Cases have cropped up in places like Kentucky and New York, according to the center, as well as in Canada, where a larger outbreak forced several barns to quarantine in February.

It is unclear if the smattering of American cases is linked to the European illness, or merely incidences of the virus that routinely occur. In Europe, F.E.I. officials are optimistic that the worst has passed, but emphasize that there are still reasons for caution.

So far, the U.S. Department of Agriculture has not suspended the importation of horses from affected countries. Smaller nations like Jamaica, where an outbreak might overwhelm the limited horse population, banned imports in an attempt to keep the virus from its shores, according to the Ministry of Agriculture and Fisheries’ veterinary services division.

So when McCoy, the gray Irish Hunter gelding, which Allen imported for his wife, Rae Stone, spiked a fever shortly after arriving on American soil last month, Allen whipped out a nasal swab.

“It was no big deal,” Allen said after the P.C.R. test came back negative for the herpes virus. Still, he said, he had to wonder: “When that is going on the European continent, and you’re importing horses over here, are you importing problems?”