Yankees Manager Aaron Boone’s daily pregame news briefing had already been overtaken by incremental updates of which injured players had progressed by taking swings, making throws or engaging in other nebulous baseball activities before Sunday morning’s news was delivered. Superstar right fielder Aaron Judge has been diagnosed with a “pretty significant” oblique strain, Boone said, which will require a couple weeks of rest and an uncertain timeline for return.

Judge is now the 13th Yankee on the club’s injured list, completing a formidable squad of inactive position players that includes six starters from its Opening Day lineup: outfielders Judge and Giancarlo Stanton, infielders Miguel Andujar, Greg Bird and Troy Tulowitzki and catcher Gary Sanchez. Only outfielder Brett Gardner and designated hitter Luke Voit remained in the batting order for Sunday’s matinee with the Royals. The ninth, shortstop Gleyber Torres, received a regularly scheduled rest day but came in as a pinch-hitter in the eighth of a 7-6 victory in extra innings.

“There’s a couple guys that are irreplaceable here, but we’ve got to find a way to do it,” said Yankees catcher Austin Romine, who tied the game with a run-scoring single in the eighth and won it with another one in the 10th.

New York won for the fifth time in its last six games to improve to 11-10. But that comes with a caveat, as the Yankees have feasted on weaker teams: Only three games — all losses to the Astros — have come against a club with winning records. None of the three opponents on its upcoming nine-game trip out West (the Angels, Giants and Diamondbacks) is currently above .500. 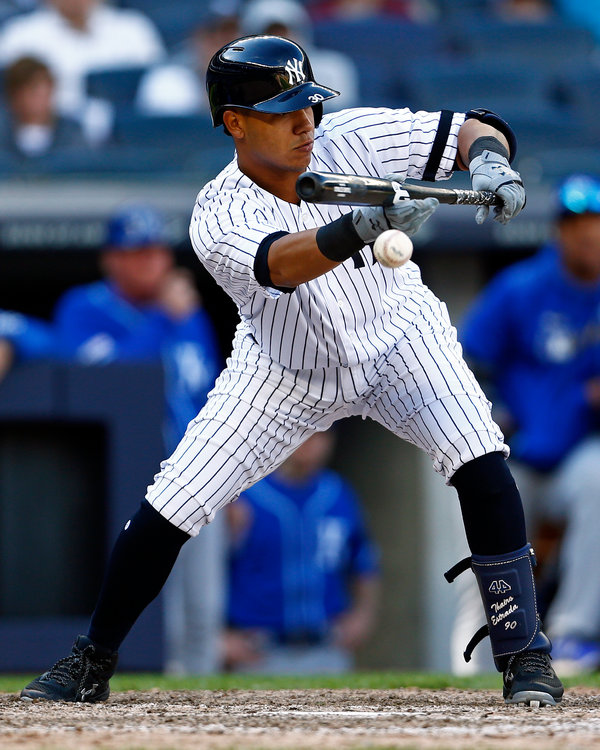 Judge, one of the team’s most popular players with fans, had started each of the Yankees’ first 20 games this season. After missing significant time in 2018 because of a fractured wrist, he said avoiding the I.L. had been a personal goal. And it was a goal for the team as well, as the Yankees won two-thirds of his starts last year, going 72-36, but won barely half in his absence, managing a record of 28-26. Judge’s .988 on-base plus slugging percentage since the start of the 2017 season ranks second in the American League only to Angels superstar Mike Trout. Boone called Judge “one of the greatest players in the sport.”

“There’s no time frame for anything right now,” Judge said. “There’s no need for one. We’re just going to go based on how I feel, and we’ll just kind of progress from there.”

In his place, the Yankees recalled infielder Thairo Estrada, promoting the last healthy position player on the 40-man roster, and creating an unusual logjam at the ballpark.

The home clubhouse in Yankee Stadium features 36 lockers. Nearly a third are typically vacant with a 25-man active roster, allowing players to share storage in the empty stalls. Rehabbing major leaguers, however, retain their spaces, creating cramped conditions. With Estrada’s promotion on Sunday, nameplates stood above 35 of the 36 lockers.

That largely unknown crew of players led to an unusual starting lineup on Sunday in which Boone etched the names of Gardner, Clint Frazer and Mike Tauchman in the third, fourth and fifth slots. Of that group, only Gardner homered in a big league game last year. In all, players who slugged 175 of the Yankees’ major-league-record 267 home runs last year are on the I.L.

Boone, though, thinks the team can remain competitive.

“Look, I hate not writing Judge in there, but I feel like the lineup we’re putting out there today is capable of going out there and putting some points on the board,” Boone had said before the game.

The contributions in the team’s recent hot streak have come from up and down the lineup. Frazier, a former No. 5 overall draft pick, ranks among the A.L. leaders with a .339 batting average and on Sunday he hit his sixth home run of the year. Tauchman, who entered the year with nine career hits and no home runs in 52 big league games with the Colorado Rockies, homered in three of his previous four games and notched two hits on Sunday. After a three-hit game on Saturday, third baseman Giovanny Urshela received congratulations on Twitter from Iván Duque, the president of Urshela’s native Colombia. Mike Ford collected his first career hit, a double, in his third career game on Sunday. Tyler Wade made his third career start at shortstop.

“I try to stay prepared for anything,” said Tauchman, who doubled and scored in the eighth. “To this point in my career, that’s kind of had to be my role — just be ready for each and every situation.”

Before Saturday’s game, Boone said he was starting to “look forward to getting the cavalry back” yet it’s uncertain how close the injured players are to active duty. Only Sanchez is clearly on track to return during New York’s road trip, as he is scheduled to catch for the Class A Charleston RiverDogs on Monday before rejoining the big league club in Anaheim on Wednesday.

Otherwise, Boone has said Stanton could “possibly” be back before the Yankees return home on May 3. Before Sunday’s game, Andujar, who has a right shoulder injury, made throws on the infield under the watchful eye of trainer Steve Donohue. Andujar, Hicks and Tulowitzki were all heading to Tampa for further rehab.

Boone has littered nearly all his injury updates with declarations that he is “optimistic” or “encouraged” about players’ progress. “It’s not an act up here,” he said, insisting he felt the same when not fulfilling his daily obligation as the franchise’s spokesman.

“Adversity is a reality,” Boone added.