Under the AFL's new six-six-six rule, teams that seek to protect a lead by placing multiple extra players behind the ball to protect a lead late in the game will concede a 50m penalty in addition to a free kick.

The addition of the 50m penalty will be included as part of the rule to prevent teams from deliberately conceding the free but still positioning themselves – with extra players in defence – so that the opposition finds it harder to score. 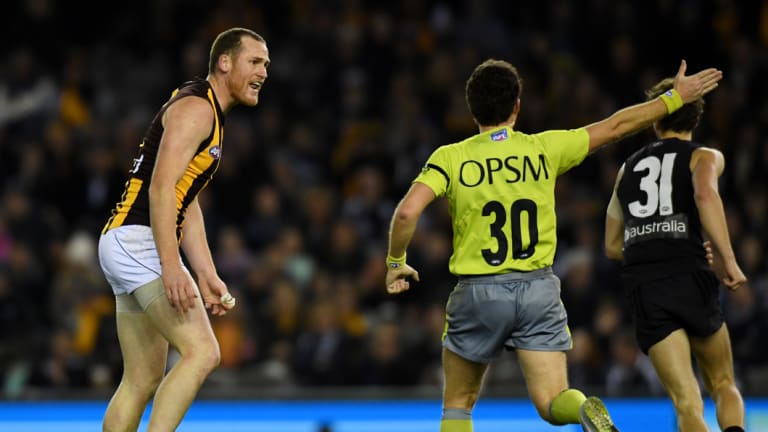 Clubs will concede a 50m penalty on top of a free kick if they flood back at centre bounces.Credit:AAP

The additional 50m penalty would be applied if teams were intentionally putting those extra players back – rather than just having one extra player misplaced in the defensive half in order to protect a lead.

One scenario raised at club level was that a team with a lead of eight points with a minute left could put three or four players behind the ball at a centre bounce.

While this tactic would give their opposition a free at the centre bounce, the theory is that it would make it harder for them to take a mark or win a ground ball and score; in effect, the idea would be to put the game out of their reach as time ran out.

But the AFL has clarified that intentionally putting extra players back would also bring a 50m penalty, meaning the opposition would be gifted a shot on goal from straight in front and well within scoring distance.

Under the six-six-six rule, teams must have six players in each 50m arc at centre bounces, four in the centre square (as usual) and two "wingmen'' outside the square. The purpose of the rule is to open up the game and one consequence would be that teams won't be able to defend leads by putting extras players behind the ball at centre bounces.

The AFL has also suggested to clubs that, early on, players will be given some time to get into position before the centre bounce, as they adjust to the new formation.

Essendon, Carlton, Collingwood, Greater Western Sydney, Geelong and the Swans are among the clubs to have been briefed on the rules by the AFL's game analysis unit, headed by ex-Hawthorn assistant David Rath.

The AFL hopes the new kick-in rule – which allows the kicker to run straight out of the goal square without kicking to himself – will give defending teams more options by enlarging the field they can move the ball into. The AFL has been concerned that teams have found it increasingly difficult to move the ball from defence and score, due to the prevalence of zones and defensive formations.

There is a view at club level, too, that removing hands in the back might be beneficial to certain players, including key forwards like Tom Hawkins and Jack Riewoldt who like to use their body to hold out the defender.

But it can be argued that some marking defenders – particularly Jeremy McGovern – would also benefit from being able to use his hands to touch the back of an opponent, without pushing.