The AFL has introduced a "Toby Greene rule'' aimed at preventing players from raising their stops and causing injury in marking and other contests.

The AFL Commission has approved of a rule that will lead to a crackdown on players such as Greene who have raised their leg in a way that exposes opponents to boot-stud injury, with free kicks paid and potentially suspensions for more severe offences with studs up.

The Greene rule was passed by the commission, along with a raft of other reforms to the laws of the game, including a change to the bumping rule and have given the match review officer the option of a set penalty of three matches for some head high, severe and intentional incidents. 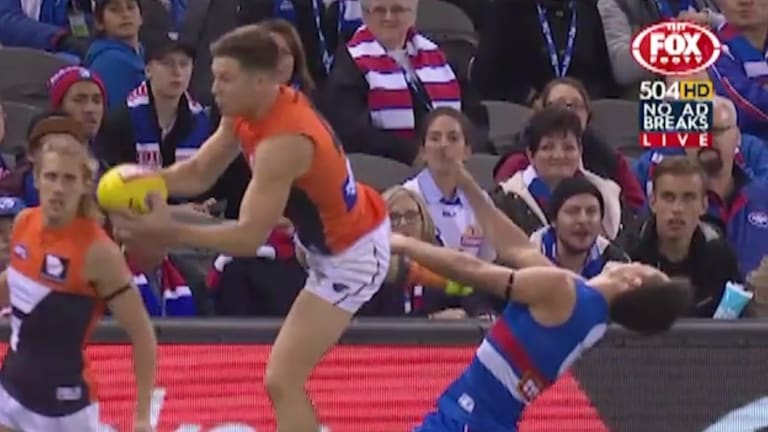 Stopping the stops: the AFL has amended its rules to deal with raised boots.Credit:Fox Sports

Greene therefore becomes one of the select group of VFL/AFL players to have had a rule modified as a result of his on-field acts. Richmond great Kevin Bartlett's tendency to throw the ball in front of him when tackled resulted in a change to the holding the ball rule, while Lindsay Thomas' slide into Gary Rohan caused the immediate introduction of the sliding rule.

As reported by The Age on Monday, the commission also changed the bumping rule to make the player who elects to bump liable if there's a head clash or other impact that isn't directly to the head and will crack down on low-level punches and niggles. The bumping change could be referred to as the Ryan Burton rule, given that the then-Hawk's bump on Shaun Higgins – for which Burton was cleared – was clearly the catalyst for the change.

The AFL has discussed the option of introducing the red card for serious incidents such as Andrew Gaff's punch on Andrew Brayshaw, but has baulked at introducing it for 2019 and has instead focused on stamping out low-level punches and niggles that can escalate to more serious incidents.

The AFL has changed the rules governing AFLW Tribunal decisions, in a clear response to the suspension for the grand final of Bulldog gun Katie Brennan. In effect, it means the AFLW player in Brennan's position would not miss a game for two minor offences, as she did.

Under the changes, the AFL has created a specific offence for strikes with "negligible impact'' rather than the catch-all of misconduct.

The AFL also will be stricter on fining players who have incidental careless contact with an umpire, with the umpires to vary their approach to centre bounces when it is evident that players are favouring one side of the centre circle. In some cases, umpire contact will bring a free kick against the infringing player.

The AFL has created a new category for intentional umpire contact, whereby charges can be laid for acts that are deemed "aggressive, forceful, disrespectful or demonstrative''.

There is another new category, too, of “unreasonable or unnecessary contact with an umpire” to deal with contact which isn’t covered by the new guidelines but isn't deemed careless.

Stomping and eye-gouging offences can now be directly referred to the AFL Tribunal.