The AFL needs to abandon all pretense of players being substituted for medical reasons and call the new 23rd man rule what it is and will be – an emergency sub.

It is clear after just one round that clubs substituted injured players out of games and replaced them with fresh players because those injured players were unable to finish the game they were in, not because there was doubt about whether they could start the next one. 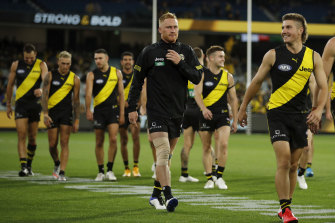 Nick Vlastuin was subbed off against Carlton but looks set to recover for this weekend.Credit:Getty Images

It is also clear that the idea a doctor can, with a high degree of accuracy, diagnose the recovery time of an injury on the sidelines during a game and without access to scans, X-rays, blood tests or hyperbaric chambers – and be held to that prediction – is an utter nonsense.

It is also becoming clear that this might have been the AFL’s intention all along.

When Hawthorn coach Alastair Clarkson raised the concussion sub a week out from the season, the AFL and in particular CEO Gillon McLachlan seized on the idea with such alacrity it begged the question of what other agenda was at play.

The rushed sub rule – brought in barely 24 hours before the first game of the season – appears now to just be another step to expedite the abolition of the interchange bench and rotations altogether. 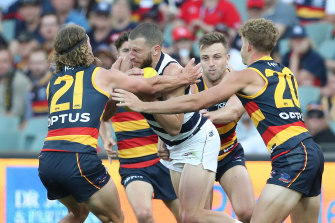 Sam Menegola was subbed out during the Cats’ loss to the Crows. Credit:Getty Images

It was then and is now an unrealistic expectation to put on doctors.

Vlastuin plainly could not finish the game. If he is now recovered enough to play this week and is banned by the AFL because his recovery falls within the 12-day period it will be high farce. It begs the question: what could the doctor have said to Vlastuin and Richmond coach Damien Hardwick last week instead?

“Look, Nick can’t walk up a stair, let alone take off his socks now, but I reckon in 11 days’ time he might be able to run again so he’ll have to sit on the bench now.”

What the AFL said they wanted with the medical sub 12-day recovery timeframe was to set the threshold for an injury at a level above minor twinges or cramps, and thus avoid the rule being used for tactical reasons.

But that is a tremendously fraught professional and ethical barrier to clear.

Could the doctor assessing Menegola’s AC joint have predicted that scans would reveal less damage than his hands could feel and his eyes could see from Menegola wincing in pain?

To potentially stop a subbed-out player playing the next game because he improves faster than the doctor thought means the AFL has to declare the doctor was wrong and should have reasonably known the player was not as injured as he seemed and would recover quickly.

The AFL therefore needs to call the substitute what he is. An emergency sub, a reserve player who can come on for any injured player who cannot return to the field of play.

The coaches got their way with a 23rd man this season. But perhaps they really just gave the AFL what it wanted.

Keep up to date with the best AFL coverage in the country. Sign up here to our Real Footy newsletter delivered to your inbox on Mondays and Fridays.