Emma Kearney watched on at Whitten Oval on Saturday night, providing special comments for Channel Seven. Not that the Western Bulldogs were missing last year’s AFLW best and fairest.

The reigning premiers are so far getting by fine without Kearney, (these days North Melbourne captain). With Saturday night’s 18-point win over Geelong, it's two victories from as many starts for the Dogs in 2018.

The Dogs won the game over the competition newcomers on the back of a three-goal to nil second quarter. 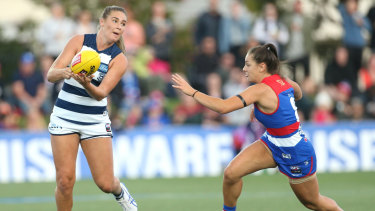 Captain Ellie Blackburn was again outstanding, while Monique Conti was also in the thick of things, and Kirsty Lamb impressed.

The Dogs now turn their attention to Kearney's Roos, also undefeated. The two sides will meet next Friday night in Launceston.

The Cats – hurt by the midweek season-ending knee injury to Nina Morrison – didn’t relent and look like a tricky opposition. However a general lack of class around the ground was telling.

Perhaps even harder to cover than Kearney is Brooke Lochland, the competition’s leading goalkicker last season, who is sidelined due to a leg fracture sustained in a practice game.

While the Dogs aren’t exactly kicking cricket scores, their total of 5.4 (34) on Saturday night was a sizeable improvement of last weekend’s unlikely winning tally of 2.6 (18) against Adelaide.

Pluck of the Irish

It was a night to remember for Irish debutant Aisling McCarthy. The Tipperary export didn’t look at all out of place, and even though she didn’t have a lot of the ball, she made her presence felt. In the second term she laid a strong tackle which opened the door for Deanna Berry to run into goal. Then in the third, McCarthy finished the job herself, slotting a major from general play. Unsurprisingly she was duly mobbed by teammates.

Aasta O’Connor was a member of the Bulldogs premiership team, and has a reputation for not being short of a word on the field. Playing against her former side for the first time, O’Connor had a chance to kick what would have been an important goal not long before half-time at the Geelong Road end. It didn’t end well. O’Connor dropped the ball while running in to take the set shot, and while she managed to recover the footy her eventual kick was hurried and didn’t register a score. Not surprisingly former teammate Ellie Blackburn was more than happy to get in her former teammate’s face to let O’Connor know all about her blunder. Things got even worse for the ruck from there, as she left the ground in the third quarter with a suspected foot injury. 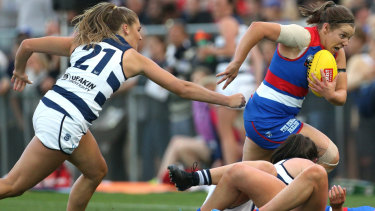 No troubles for Sue

Susan Alberti’s difficulties getting into Whitten Oval during a game last season were well-documented, but there were no such troubles for the former Bulldogs vice-president and prominent benefactor on Saturday night. Alberti mightn’t have been an official VIP, but she took her place in the EJ Whitten Stand to watch the “Daughters of the West” go about their business. It was another couple of daughters who played a prominent role in the night’s proceedings. Izzy Grant and Bridie Garlick, daughters respectively of Bulldogs great Chris Grant and former chief executive Simon Garlick, unfurled the 2017 AFLW premiership flag, with AFL chief Gillon McLachlan looking on.