ARLINGTON, Texas — At the very end, 2020 did what it does best, intruding on joy with an unwelcome risk-or-reward calculation. Justin Turner, part of the soul of the Los Angeles Dodgers, learned that he had tested positive for the coronavirus during the World Series clincher on Tuesday night at Globe Life Field. Then he defied orders from Major League Baseball security and celebrated on the field with teammates and family members, at times without wearing a mask.

Turner, an integral member of six Dodgers playoff teams that fell short of a title, had been removed from Game 6 two innings before reaching the long-awaited summit: a 97 mile-an-hour fastball from Julio Urias that the Tampa Bay Rays’ Willy Adames took for a third strike, the final out of the season. Turner’s replacement at third base, Edwin Rios, had the view Turner must have always imagined.

“In the moment, it’s gut-wrenching,” said shortstop Corey Seager, who hit .400 and was named the World Series most valuable player. “You don’t know what to do. You want that man beside you. We’ve done a lot on this field and to not be able to have him there and finish it, that hurts. That hurts a lot.”

It was so different 32 years ago in Oakland, Calif., the last time the Dodgers won the World Series. After Orel Hershiser finished a nine-inning masterpiece in Game 5, the only unwelcome presence was a woman in a pink sweater hounding him to film a Disney commercial.

“You look to the camera, say it, and you keep celebrating with your teammates,” Hershiser said by phone on Tuesday afternoon. “And then she goes, ‘That camera, say it again!’ So as long as you give them a good take, you only have to do it twice, because you have to do it for Disneyland and Disney World. And then the very next day you go there, for truth in advertising. It was unbelievable.”

These days, it is hard to imagine an innocent, uncomplicated jaunt to a crowded theme park. How will Los Angeles honor the Dodgers now? Who knows. In a statement on Wednesday, the team promised a celebration but said it would “wait until it is safe to do so,” without specifying when or how. 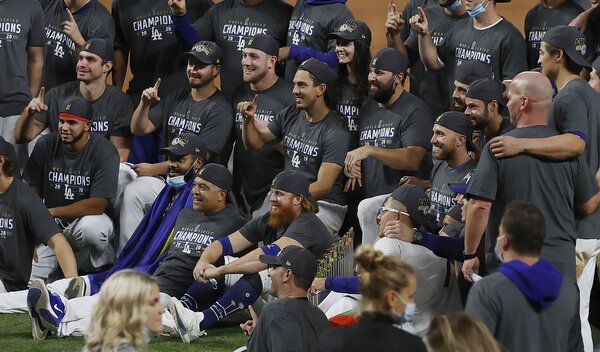 Yet for Turner, Kershaw, Seager, Mookie Betts and the rest, the parade is not the point. As time goes on, Hershiser said, they will learn that the afterglow never dims. After losing a seven-game World Series to Houston in 2017 — the year the Astros illegally stole signs at home — and a five-game defeat to Boston in 2018, the Dodgers have a new identity.

“I think they’re already champions because of 2017 and the cheating,” Hershiser said. “But the main thing — the more micro — is that these guys need to be in conversations on a daily basis about winning, not about ‘when are you going to win?’

“Justin Turner has talked to me about this, and so have others: Every conversation that they have with a waiter, with charity work, with their friends, with neighbors, walking through the grocery store and somebody stops them, sooner or later, the conversation’s going to get to: ‘When are you guys going to win it? It’s been too long.’ They need to have all these conversations turn positive.

“And that’s what we experienced in our life. The equity from winning a world championship in Los Angeles is huge. You’re remembered for the rest of your life. You might get a table at a restaurant, you might get a drink bought for you, you get a smile and somebody comes by your table and says, ‘Thank you so much for ’88.’ You get all these positive stories and vibes. And I think this generation of players, as good as they have been and as much as they have sacrificed and earned — and then to get it stolen from them — they deserve those conversations more than anybody.”

Dave Roberts, the team’s current manager, said the members of the 1988 team, from Hershiser to Kirk Gibson to Manager Tommy Lasorda, had been gracious and unfailingly supportive of the current team’s quest to win another. But the title drought had shadowed a consistently strong franchise. Teams led by Mike Piazza, Adrian Beltre, Manny Ramirez and Adrian Gonzalez could not win a pennant.

The Dodgers have had even deeper rosters lately, and this year’s National League West title was their eighth in a row. To any observer, including members of the 1988 team, they were due for glory.

“It’s over for us,” said Mickey Hatcher, the spare outfielder who became a folk hero with two homers in the 1988 World Series. “I talked to Mike Scioscia the other day, and it’s like: ‘You know what, these guys, they need to come through with it this year.’

“We had our reign, nobody’s ever going to take that away from us. We had a special team with magical stuff that happened that year with Orel and Gibby and a lot of other things. Those will always be there; Orel and Gibby are going to keep us on the map for a long time, just with what they did in our World Series. But it’s time.”

The 1988 Dodgers were not far removed from the franchise’s previous title, which had come against the Yankees seven years earlier. This victory is no sweeter than it would have been any other year, Kershaw said, but reliever Kenley Jansen acknowledged the frustration that preceded it.

Jansen, a three-time All-Star closer, signed with the Dodgers from Curaçao in 2004, when he was 17. He has twice walked off the mound after World Series heartbreak — a wild (and, in retrospect, suspicious) 13-12 defeat in Houston three years ago and the Rays’ improbable 8-7 comeback on Saturday. Roberts passed him over for the clincher on Tuesday, but Jansen understood.

“It’s a team, man,” Jansen said. “We all want that moment, but Julio was throwing the ball really well. It’s awesome. I feel like I’m a true Dodger now. After 32 years, the trophy’s going back to L.A. I will cherish this moment my whole life.”

Urias draped the Mexican flag over his shoulders for his postgame interview Tuesday, honoring the home country he shares with Fernando Valenzuela, the ace of the 1981 champions. As the final pitcher in the World Series, Urias, 24, also conjured memories of another young lefty, Johnny Podres, who closed out the franchise’s first title for Brooklyn in 1955.

“It was the most important out, and everyone was waiting for that,” Urias said through an interpreter. “All of L.A. was expecting that, and I’m thankful to God that we were able to achieve it.”

Most deserving of all, perhaps, was Kershaw, who was just 7 months old in October 1988 but has often seemed to carry the burden of the 32-year wait. A three-time Cy Young Award winner and a lock for the Hall of Fame, Kershaw had an uneven postseason history until this fall, when he won four of five starts and added the only missing piece to his legacy.

Kershaw saw the final out from the bullpen. He never had to pitch in relief this postseason, and never had to work on short rest. At long last he was part of a team that had it all. He took a moment to look around the ballpark before romping to the infield, a sprint that took decades.

“It was a content feeling, just like: The job is done, we won, we won our race, and it’s over,” Kershaw said. “We completed our mission.”