For the uninitiated, the best nickname in the N.C.A.A. tournament hails from the University of California, Irvine: the Anteaters — though apparently the cognoscenti prefer an abridged moniker.

“We usually like to take off the ‘Ant’ and just say ‘Eaters,’” guard Evan Leonard said. “So I feel like Eater Nation, stuff like that, is pretty cool.”

Also pretty cool: claiming the first significant upset of the tournament. The No. 13 Anteaters — Eaters, excuse us — ousted No. 4 Kansas State from the South Region, winning by 70-64 to capture the program’s first N.C.A.A. tournament victory.

Indeed Irvine had only one previous appearance — losing to Louisville in 2015 — and its recent lineage is littered with strong regular seasons followed by flameouts in the Big West Conference tournament. But in a dreadful season for California’s men’s teams — standard-bearers like Stanford, U.C.L.A. and U.S.C. didn’t even qualify for the National Invitation Tournament — the Anteaters have represented the Golden State with distinction, going 31-5 with 17 straight wins.

“We have visions of potentially growing into something greater — you know, every player dreams of that, every program sort of dreams of that,” Coach Russell Turner said. “This was a big step toward that tonight. You know, U.C. Irvine, folks, I don’t know, live in the shadow, live like little brothers to U.C.L.A. and S.C. and maybe some others: Cal, Stanford, San Diego State. Maybe like little brothers. Well, little brother has been in the weight room, getting better, getting ready for a chance like this.” 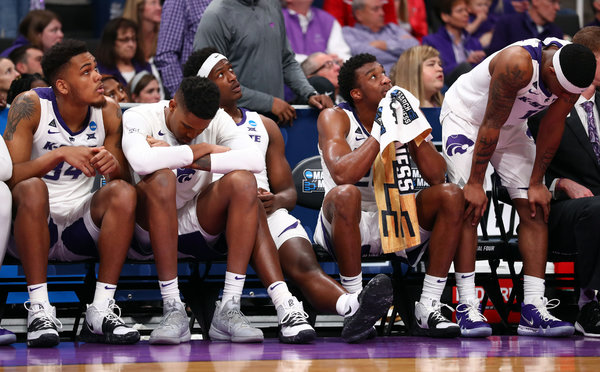 In dispatching Kansas State, U.C. Irvine managed to succeed where other pesky underdogs Friday afternoon could not. In the South, No. 15 Colgate trailed by two points with 5 minutes left before losing to No. 2 Tennessee, 77-70, and No. 1 Virginia avoided another calamitous first-round exit by drubbing No. 16 Gardner-Webb in the second half to win, 71-56.

U.C. Irvine’s victory was different. When Turner was asked Wednesday about being a popular choice to win, he laughed. But he knew, and so did his players, that they had not lost since Jan. 16.

To extend that streak, the Anteaters summoned critical 3-pointers from two junior guards, Evan Leonard and Max Hazzard. Leonard made his shots on consecutive possessions to put U.C. Irvine ahead to stay for the final nine minutes, and Hazzard drilled a shot from the corner with about 90 seconds remaining to push its lead to 66-61. Kansas State, which won a share of the Big 12, missed its all-Big 12 forward Dean Wade (injured foot).

“I mean, if you studied or watched us, obviously it’s a huge difference,” Coach Bruce Weber said. “But no excuses.”

Hazzard, whose grandfather Walt Hazzard won a championship for U.C.L.A. and played for the Lakers, is one of four Irvine players with N.B.A. bloodlines. Joining him are guard Spencer Rivers, the son of Clippers Coach Doc Rivers and younger brother of Houston Rockets guard Austin Rivers; Collin Welp, son of Christian, who scored eight points on Friday; and JC Butler, whose father Caron made two All-Star teams across his 13 N.B.A. seasons.

“That’s kind of a hard thing to gauge,” Hazzard said, when asked about his team’s famous heritage. “But I know it does do something for us, just having them all here today.”

Virginia Sweats, and Then Survives

Virginia spent the last year waiting for its chance to atone for its unprecedented early exit from the 2018 N.C.A.A. tournament, when it became the first No. 1 seed to lose to a No. 16. When that chance arrived, the Cavaliers sleepwalked through the first half against Gardner-Webb and found themselves staring ignominy in the face again.

Virginia persisted, though, rolling to a 71-56 victory after outscoring the Bulldogs by 21 points in the second half. De’Andre Hunter — who missed that dispiriting tournament loss to Maryland-Baltimore County last year with a hand injury — scored 23 points to lead the Cavaliers, who recognize their place in infamy but, at Bennett’s urging, have regrouped from it.

Together, they watched a video of a TED Talk given in Charlottesville, Va., of all places, in which the speaker, discussing his personal grief, said, according to Bennett, that “if you learn to use it right, it can buy you a ticket to a place that you couldn’t have gone any other way.” The junior guard Kyle Guy, who had 8 points Friday, still keeps an image of U.M.B.C.’s celebration as the screen saver on his phone and in his Twitter profile. He said an author, Joshua Medcalf, had talked to the team last year, telling the Cavaliers, “Be where your feet are.”

Even as Virginia sputtered in the first half, trailing by as many as 14, Guy said he focused on positive reinforcement. Bennett said the mood at halftime was upbeat, and he asked his assistant coaches to “uplift” players and not “panic.”

“Yes, we made some adjustments that I think helped the guys out there,” Bennett said, “but it was, you know, don’t you dare leave anything in this locker room.”

One of those adjustments, Bennett said, was being more assertive inside, and across the first 10 minutes of the second half Virginia went on a 25-5 run.

“They punched us in the mouth,” said guard Ty Jerome. “But we just said we’ve been in that position before.”

The second day of the tournament began with Iowa extending the Big Ten’s stretch of dominance, as the Hawkeyes pulled away late from Cincinnati to win, 79-72. Iowa’s victory improved the Big Ten’s record to 6-0, which was marred later when No. 5 Wisconsin lost to Oregon.

“We’ve been saying all year long that it’s the most competitive league in the country top to bottom,” Iowa Coach Fran McCaffery said. “And you sort of expect Big Ten coaches to make those kinds of statements. But the reality is we actually believe that. And so I think it’s proving it.”

The Big Ten this season lacked the elite status of the Atlantic Coast Conference, which has three No. 1 seeds in Duke, Virginia and North Carolina, and though the conference has sent seven teams to the national championship game since 2002, it hasn’t won since Michigan State claimed the title in 2000.

But its depth has been manifest so far, with two No. 10 seeds, Iowa and Minnesota, scoring minor upsets to join two imposing No. 2s, Michigan and Michigan State, and Maryland and Purdue in the second round.

A Tossup Becomes a Blowout

In one of the biggest first-round victories by a No. 9 seed in N.C.A.A. tournament history, Oklahoma blitzed No. 8 Mississippi, 95-72, in the South Region. Paced by four starters with at least 18 points, the Sooners raced to a 12-0 lead, went up by 17 at halftime and led by 29 in the second half. Christian James and Rashard Odomes each had 20 points for Oklahoma.

According to David Worlock, the N.C.A.A.’s director of media coordination/statistics, the Sooners’ 23-point margin equaled Mississippi State’s over Stanford in 2005 and trailed only Purdue’s 24, over L.S.U. in 2003, and Pittsburgh’s 29, over Colorado in 2014. Next up for Oklahoma is Virginia, which beat No. 16 Gardner-Webb.

In his two seasons at Buffalo, Bobby Hurley cultivated the Bulls into a mid-major darling. When Hurley left for Arizona State, his successor, Nate Oats, continued building Buffalo into one of the better teams in the country — as Hurley witnessed from the opposing bench Friday. No. 6 Buffalo trounced the No. 11 Sun Devils, 91-74, and will play third-seeded Texas Tech on Sunday.