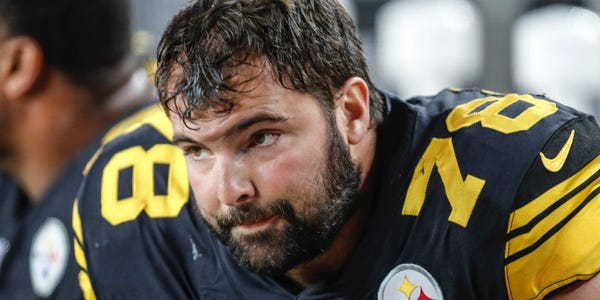 Offensive lineman Alejandro Villanueva was the lone Pittsburgh Steelers player not to put the name of a Black teenager killed by police on the back of his helmet during Week 1.

Villanueva, an Army veteran who served in Afghanistan before playing in the NFL, instead put the name of Alwyn Cashe, a U.S. Army sergeant who died in Iraq in 2005. Cashe suffered from burn injuries after pulling soldiers out of a burning vehicle, according to Military Times. He was awarded the Silver Medal.

The rest of the Steelers, however, put the name of Antwon Rose on their helmets. Rose was a Black 17-year-old who was shot by a white police officer in Pittsburgh in 2018. Rose was shot after fleeing a car pulled over because it matched the description of a car linked to a nearby shooting, police said. The officer was acquitted of homicide charges.

The NFL is allowing players and teams to honor victims of systemic racism on their uniforms this year.

"I did not know about Al's choice for the back of his helmet," quarterback Ben Roethlisberger said.

Roethlisberger added: "Obviously, that's his choice. That's the amazing thing about the country we live in. Unfortunately, it is what it is."

At least one Steelers player seemed to express regret about putting Rose's name on his helmet.

Steelers center Maurkice Pouncey on Thursday wrote in an Instagram post that he wasn't aware of all of the details surrounding Rose's case. Pouncey said he works with local police departments and wanted them to understand, "I inadvertently supported a cause of which I did not fully comprehend the entire background of the case."

Pouncey added: "Moving forward, I will make my own decision about what to wear on the back of my helmet."

The Steelers website said on Monday, September 14, before their Week 1 game, that the Steelers players and coaches decided, "united as one," to wear Rose's name on their helmets for the entire 2020 season.

Villanueva has gone against the Steelers' plans before. In 2017, the Steelers voted to stay inside the locker room for the national anthem. Villanueva instead watched from just outside of the tunnel. He later said he had accidentally walked ahead of the team, saying he felt "embarrassed" that he had gone against the team's plans.