Miguel Andujar, the Yankees third baseman, listened to the gently phrased questions about his injured right shoulder and the possibility of having season-ending surgery. He acknowledged the cold truths about torn labra: They can’t heal on their own, and most players who suffer similar ruptures end up on the operating table.

Yes, Andujar said, he gets that. But as he spoke before the Yankees’ 3-1 loss to the Detroit Tigers on Tuesday, Andujar dismissed the worst-case scenario, vowing to beat the odds, avoid surgery and return to action within weeks.

If he does so, it would be a rare instance of good fortune for the Yankees, who now have eight players on the 10-day Injured List, including their ace (Luis Severino), circus strong man and home run leader (Giancarlo Stanton), and their front-line shortstop (Didi Gregorius). Andujar joined them after a headfirst dive into third base against the Orioles on Sunday.

After initially feeling a “weird” sensation in his shoulder, Andujar said, he remained in the game, and he still felt strong afterward and even into Monday. But a magnetic resonance imaging exam revealed a small labral tear, prompting the Yankees to shut Andujar down for at least two weeks. After that, he will begin a cautious program of physical therapy, which he and the team hope will preclude the need for surgery.

“I’m optimistic,” Andujar said. “My shoulder is strong. There’s a still a chance I can get through this and get back on the field.”

Aaron Boone was just as inclined to turn his gaze away from the possibility of an Andujar-less summer. Hard to blame him: The 24-year-old infielder finished second in the American League’s rookie of the year voting in 2018, leading all first-year players in hits (170) and breaking the Yankees’ record for doubles in a rookie season — previously set by Joe DiMaggio in 1936.

Although inconsistent on defense — he committed 15 errors last year — Andujar’s performance partly explained the Yankees’ decision to pass on pursuing Manny Machado in free agency this winter. After losing to the Red Sox in a division series, the Yankees were decidedly upbeat about Andujar and their roster in general entering 2019.

That optimism was based on three factors: that Aaron Judge, who missed seven weeks with a broken wrist last summer, would be healthy in 2019; that Stanton would be better acclimated to playing in the high-pressure New York market in his second year; and that catcher Gary Sanchez had nowhere to go but up after batting a disastrous .186 last season. 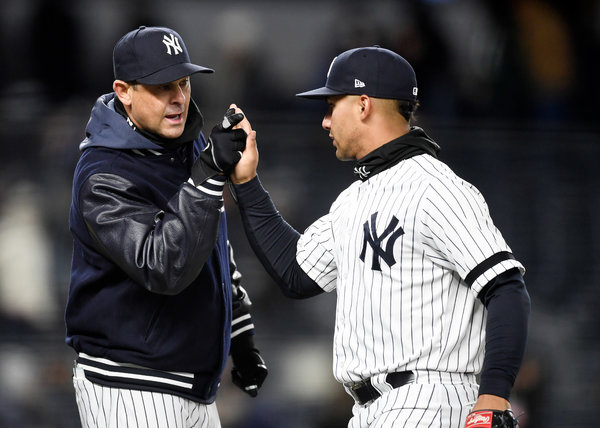 Bundled with the continued maturation of Andujar and his fellow rookie Gleyber Torres, the Yankees felt they could close the gap on Boston without spending much on new additions. Judge spoke for his teammates recently when he said, “From the first day in camp, I felt this was going to be a better team than last year.”

But five games in, it has been a harsher reality for the Yankees with the unusually severe run of injuries. Severino, who was diagnosed with shoulder inflammation last month, still has not thrown off a mound, and he is not likely to return until May at the earliest. Center fielder Aaron Hicks is battling a stubborn lower back problem; he has already received two cortisone shots. Dellin Betances, the flame-throwing reliever, is sidelined with a shoulder impingement, although he threw a bullpen session on Tuesday and could be back in a week.

Stanton’s injury was the most mysterious: a grade-1 strain of his left biceps he sustained with what Boone called a “funky” swing on Sunday. Like Andujar, Stanton will be out of the lineup for at least 10 days, although his injury is less serious. Nevertheless, the Yankees have been forced to depend on reinforcements earlier than expected, putting their depth — and emotional resilience — to the test.

The always-upbeat Boone said he felt the Yankees would emerge as a better team after April’s challenges.

“One of the strengths of our organization is the depth,” he said, adding that each of the Yankees’ replacements were “capable of producing at the big league level.”

Boone’s rallying cry might have resonated a bit more had the Yankees not lost their opening series to the lowly Orioles. Most damning was their situational hitting: The Yankees went 10 for 56 with runners on base in the three-game series, including 6 for 29 (.207) with men in scoring position, including eight strikeouts.

Despite a renewed attention to situational hitting, the Yankees reverted to their all-or-nothing swings of last season, an approach that made them a two-sided threat to opposing pitchers: capable of demolishing 400-foot home runs, but just as vulnerable to a swing and miss at the most critical moments.

Now, without Andujar and Stanton, call-ups like Clint Frazier and Tyler Wade will get their chance. D.J. LeMahieu, the infielder acquired by the Yankees in January, started in place of Andujar on Tuesday.

But will it be the same Yankees? Boone insisted that his “expectations have not changed,” although no one could blame him for crossing his fingers — tightly.