The Australian Olympic Committee is ready to dip into a war chest of $150 million to get its athletes to Tokyo free of coronavirus – and the white elephant of Australian sport could become a white knight, with the Australian Institute of Sport declaring it could quarantine team members in a major pre-Games “base camp”.

Australia’s chef de mission for Tokyo 2020, Ian Chesterman, on Thursday announced ambitious plans to deliver athletes to the Games “coronavirus free”, saying the AOC wanted to isolate the country’s 480-strong Olympic team in camps in Australia and Japan before the Games begin and transport them there and back on charter flights. 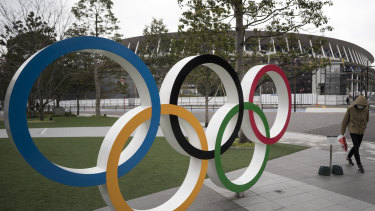 Olympic organisers are still planning for Tokyo 2020 to go ahead.Credit:Getty

AIS chief executive Peter Conde said he had begun talks with the AOC about athletes using the facility as a quarantine base before Tokyo. There are 600 beds on the site and a dining room that can hold 100 at a time, and while he maintained it was unrealistic to host the whole Olympic team there before the Games – there is no cycling velodrome, for instance – Conde said “there is a very significant capacity”. The AIS’s altitude house is also in high demand, including from athletics, as sports who intended to send athletes abroad for altitude camps scramble to make other plans.

“There is a lot of area there and we have a reasonably good isolation from the rest of the world there,” Conde said. 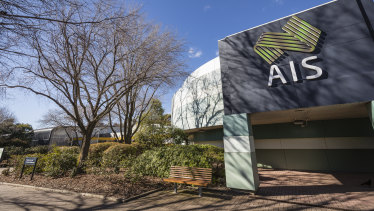 “It’s one of those [possible sites]. We’ve been involved in those conversations with Ian and the AOC. It’s clearly not the only one. Sports have established other bases for their departure camps and they may be looking to extend those. But it’s really important to offer them that opportunity.”

The new developments came as Japan extended its entry restrictions to include arrivals from most of Europe, Iran and Egypt as well as South Korea and China. The AOC has asked the IOC for clarity on Japan’s quarantine requirements for Tokyo 2020 while Australian sports and athletes, who are grappling with uncertainty, await news on changes to qualifying after COVID-19 forced events to be shut down around the world.

“All of these kids have been working [towards the Olympics] all of their lives. A lot of them will only let one opportunity to go to an Olympic Games. It’s surreal on all levels. Everybody is hurting at every level,” said Gymnastics Australia CEO Kitty Chiller, Australia’s chef de mission at the Rio Olympics in 2016.

“To me, my world is just a nightmare at the moment but you need to recognise that everyone’s world is a nightmare. We all just need to be patient and kind and understanding and recognise that it’s going to end at some stage. How and when we don’t know but we just have to do the best we can.

“But for athletes I just couldn’t even imagine. Athletes and coaches like control over things and there is zero control that we have.”

While there are increasing calls for the Olympics to be postponed, Chesterman said they would be cancelled altogether if they could not proceed and the IOC was not discussing holding the Games without crowds.