The Russian Olympic Committee has finally ended America’s dominance. On Tuesday night, in the women’s team gymnastics event that the United States had won at every Olympics and World Championship since 2010, a surprise victory was secured with a score of 169.528 to 166.096.

And yet, while the story is of a grip loosened and a powerhouse topped, the headline came early in this battle when four-time Olympic champion Simone Biles withdrew after the first rotation. A botched vault saw her take leave and return later. But by then, the Russians had established the lead and the US, without their totem, could only dig so deep. Away from the main tussle, a sterling effort from Great Britain’s quartet of Jennifer and Jessica Gadirova, Alice Kinsella and Amelie Morgan secured bronze and saw them match Team GB’s best performance in the event back in 1928.

There will be no three-peat of Olympic team success and no six golds for Biles, although she still has the chance to make history with five golds – no female gymnast has ever done that before. But the uncertainty over the nature of her pain casts doubt over possible success in her remaining individual pursuits.

Biles was the last to go on the vault – her bread and butter – on the first rotation. But what was meant to be an Amanar – finished with a two-and-a-half twist after rounding off to springboard and back handspringing to the table – contained only one-and-half of twists after the flip and caused her to stumble forwards. The gasps of the coaches and support staff from all the nations watching on in the stands said it all. As did the score of 13.766, the lowest of all the US and ROC vaulters.

She was consoled by her coach and teammates before being taken backstage ahead of the start of the second rotation. Confirmation soon came that Biles was out of the rest of the evening. Early reports were of physical injury – her ankles give her pain even when she walks. Later a team USA coach speaking on NBC stated it was a “mental issue she is having”. 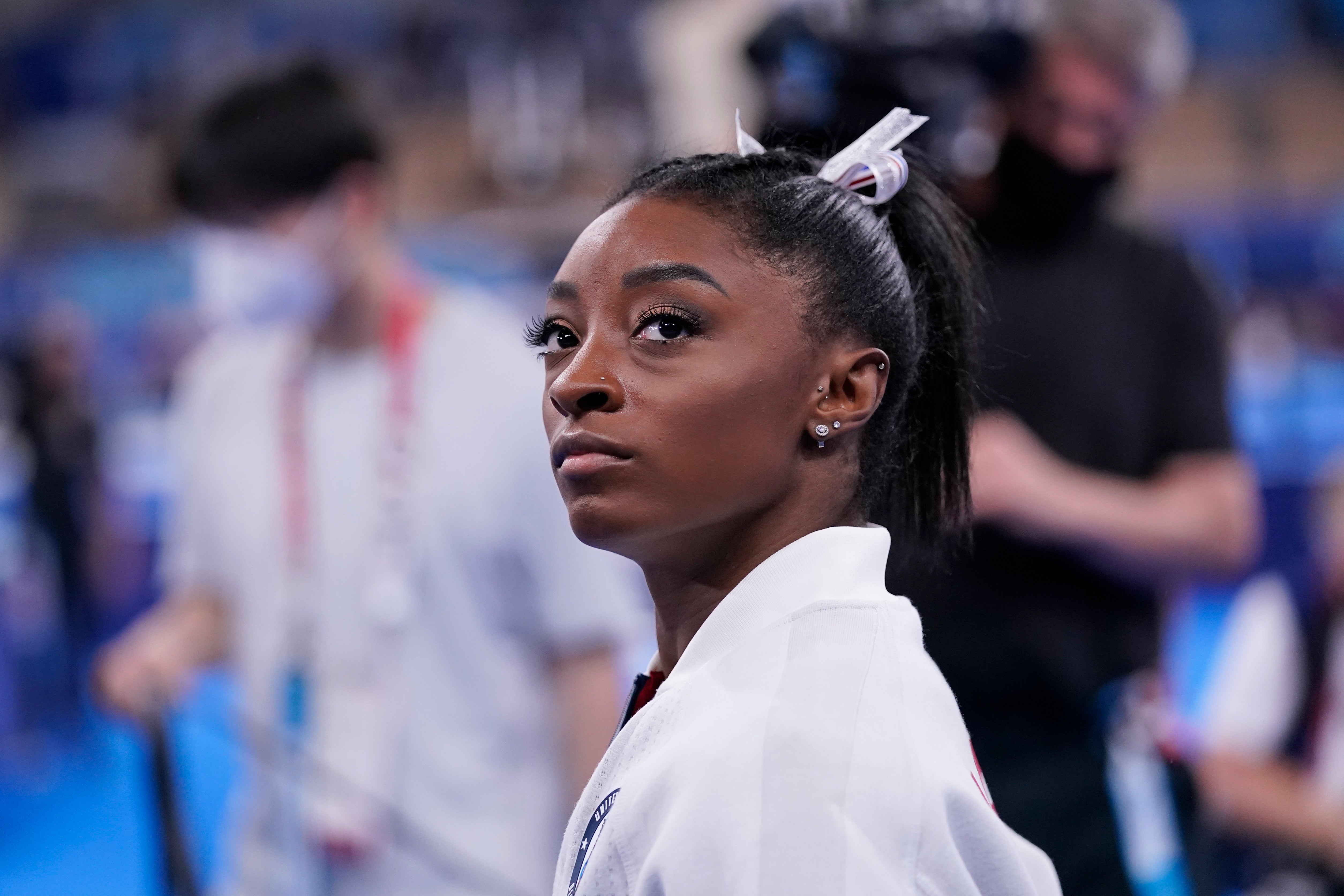 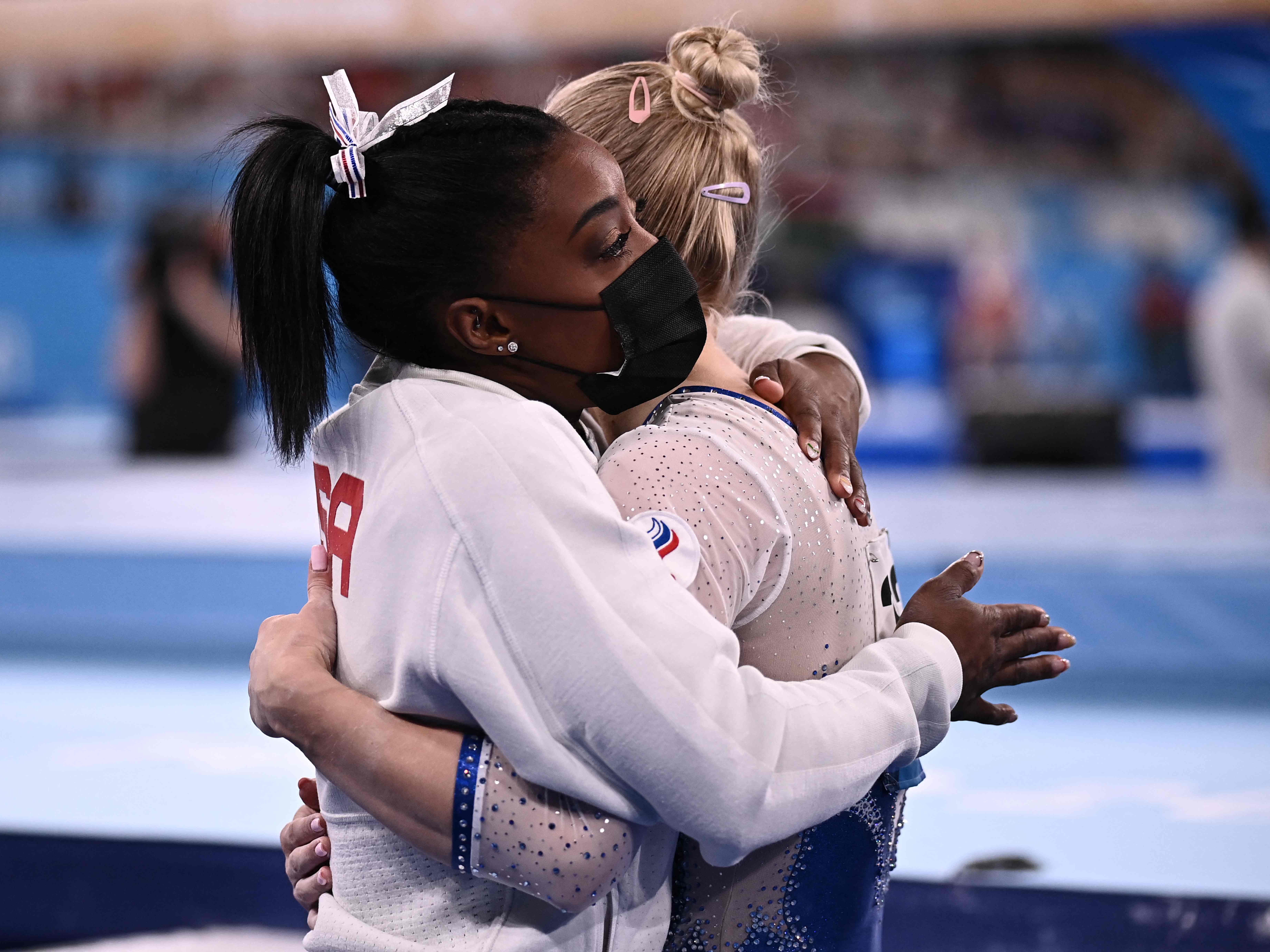 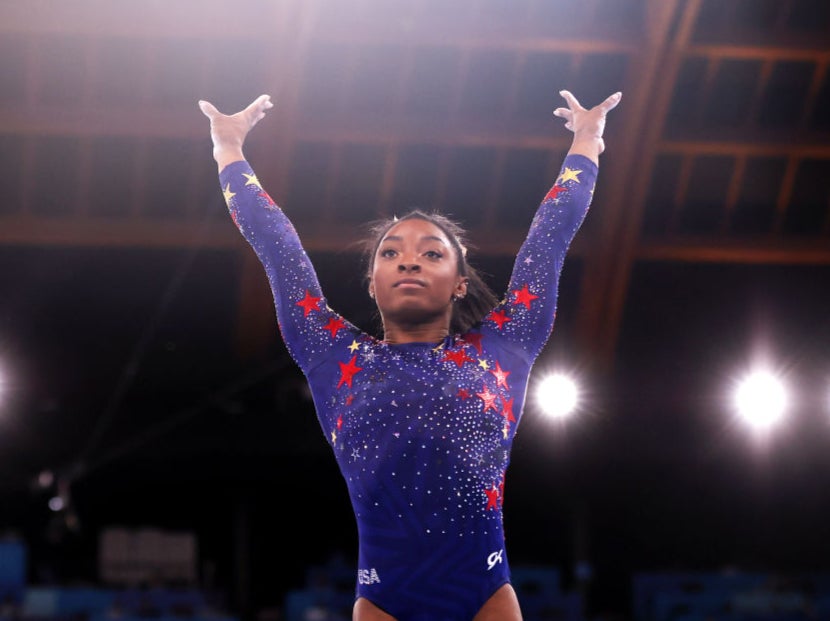 There is no question the last few years has taken its toll on Biles. After an awkward display in Sunday’s qualifiers, she admitted over Instagram she was feeling the pressure more than ever before. Last year was supposed to be her sanctuary from the pain and grime uncovered by the Larry Nassar sexual abuse scandal – one which became public a month after Biles had nabbed her four golds in the 2016 Games. It was only at the start of 2018 that she came forward with her own story.

But the delay to the Games meant another year of dealing with matters beyond the mat. When focus finally narrowed on Tokyo and those six golds, a return to doing what she loved, and the chance to underline why she is the best to ever do it, it felt like the ideal tonic.

As she composed herself after the awkward landing, the fake landing smile switched to a very real grimace as she marched off the stage and was then chaperoned out of the inner arena. A champion slinking out so early into her quest for never-seen-before glory. “Simone Biles has withdrawn from the team final competition due to a medical issue,” a USA Gymnastics statement confirmed. “She will be assessed daily to determine medical clearance for future competitions.”

Conversely, the 12-month postponement has allowed the rest of the world to catch up. The pandemic meant a schedule normally flooded with meets was opened. Breaking the endless cycle of competition allowed for more dedicated training, both the polishing of regular routines and the concocting of more outlandish moves with greater difficulty (D) scores.

And alongside that came a simpler boost for the Russians. Their stellar young guns Viktoria Listunova and Vladislava Urazova were ineligible last year because of Olympic guidelines which state competitors must turn 16 in the same calendar as the Games.

Listunova, 2019’s junior world champion, was the standout of her generation with Urazova right behind. Together they supplemented the work of pack leader Angelina Melnikova who had finished runners-up to the US in Rio 2016 and at the last two World Championships. Melnikova topped both the vault and the uneven bars to give ROC an early lead they would never relinquish. It was these fundamentals that saw them qualify in first-place on Sunday and, by Tuesday, had them on the top step of the podium.

All the more impressive was how unperturbed by the drama playing out around them with the evening’s big card draw. Even as Grace McCallum, Jordan Chiles and Sunisa Lee recorded impressive scores on the uneven bars, Melnikova, Listunova and Urazova took the top three marks to open up a huge 2.5 point lead at the halfway stage.

Then came the drama. Yes, more. Urazova stacked it off the balance beam. Then Melnikova did too. And when Chiles nailed her dismount to bring the penultimate rotation to an end and cut the deficit to 0.8, her rallying cry towards the US support threatened to lift the roof off the Ariake Gymnastics Centre.

Unfortunately, there was too much to do. And as the US trio each returned errors on the floor while the Russians went flawless, team gold was confirmed.

Fittingly, it was Melnikova who brought it home, smiling as she moved into the final throes of her repertoire, absorbing every flash of the cameras, taking in every cheer from the sideline and savouring this moment.

Like many other gymnasts, her biggest stumbling block to greater glory is simply being around while the greatest of all time was doing her thing. And while this success may be asterisked as Biles’ defeat, especially if this is her final act of not just Tokyo2020 but the Olympics as a whole, Melnikova, Urazova, Listunova and Liliia Akhaimova are just as worthy champions.