As Rudy Meredith was inducted into the Connecticut Soccer Hall of Fame in January to honor his 24-year run as Yale women’s soccer coach, he sprinkled his hallmark humor and humility throughout his remarks.

He recounted how his wife was on the opposite sideline for the University of Hartford when they met in the early 2000s. And he saluted several people in the audience while repeatedly expressing “thankfulness,” recalled Bill Duffy, a middle school principal and soccer lifer who served as master of ceremonies.

There was nothing in Mr. Meredith’s words, Mr. Duffy said, “that would refer to anything that was going on.”

Despite Mr. Meredith’s placid demeanor, people who knew him best had recently begun to detect changes in his behavior. He seemed to be more anxious. He appeared less enthusiastic about soccer, even before he resigned as Yale’s coach in November. He paid little attention to recruiting. He played poorly in pickleball, a paddle sport he usually excelled at.

In hindsight, those hints of stress and fatigue coincided with revelations that Mr. Meredith, 51, had been the linchpin of a sprawling federal investigation into corrupt college admissions schemes that exploded into public view this week.

At the heart of the scandal was a consultant, William Singer, who took $25 million to help fix exam scores or fraudulently misclassify prospective students as recruited athletes to boost their chances of being admitted to elite colleges. But the person who led federal authorities to Mr. Singer, according to court papers filed on Tuesday, was Mr. Meredith.

In a Boston hotel on April 12, 2018, Mr. Meredith solicited a $450,000 bribe from the parent of a prospective college student in exchange for saving a Yale soccer recruitment spot for his daughter. Mr. Meredith took $2,000 from the parent, and directed the parent to wire future payments to a bank account in Connecticut. But the F.B.I. was secretly recording the conversation, the charging documents said. Then six days later, the parent, who was working with the authorities, wired $4,000 to Mr. Meredith from a bank account in Boston that the F.B.I. controlled, giving the government evidence of wire fraud. 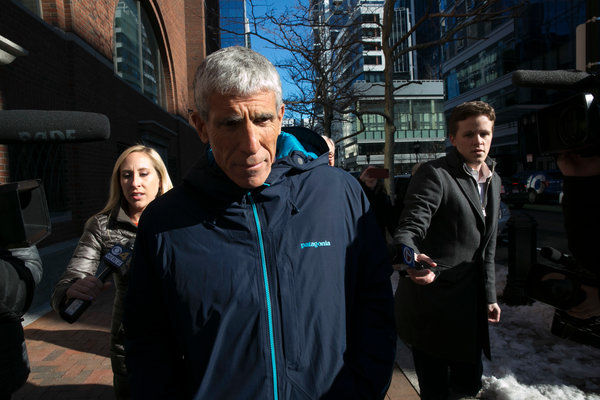 With the authorities on to Mr. Meredith, he told them about a deal he had struck in November 2017, when Mr. Singer had introduced him to a man who wanted his daughter to attend Yale. Mr. Singer helped doctor the application to make it seem as though she was the co-captain of a prominent club soccer team in Southern California, even though she did not play at that level, according to the government documents. But Mr. Meredith told the admissions office he wanted to recruit her, and after she was admitted, Mr. Singer paid the coach $400,000.

Late Friday, Yale released a statement in which it said one student involved in the scheme was admitted and is attending now, while the other was denied admission. In the statement, Peter Salovey, the university president, called the criminal actions “an affront to our community’s deeply held values of fairness, inclusion and honesty.” Mr. Salovey said the university was starting an internal investigation into its admissions process.

Mr. Meredith did not respond to a request for comment. Paul Thomas, Mr. Meredith’s lawyer, who works at a New Haven firm founded by Felice Duffy, a former Yale soccer coach who later became a federal prosecutor and lawyer, declined to comment.

It was a dramatic fall for a man considered to be a Yale institution. Mr. Meredith started as an assistant coach in 1992, rose to head coach in 1995 and led the team to its first unshared Ivy League title in 2005.

The charges blindsided virtually everyone who knew Mr. Meredith, according to interviews with more than a dozen former players and others connected to Yale or soccer. Mr. Meredith was generous and well liked, and did not appear to have any health, financial or personal problems.

“I’m both appalled and sympathetic — I would never have thought that he was capable of doing this,” said Sharon Eisen, a veterinarian who became friendly with the Merediths in recent years through pickleball, in which Mr. Meredith is a national-level player and coach. “On the one hand, I know them and like them personally. But on the other hand, I’ve lost all respect. So greedy. So immoral.”

Mr. Meredith grew up modestly in the Rockville, Md., area, and was an all-state soccer player at Richard Montgomery High School. But he failed classes while at Montgomery College, and almost quit school. After undergoing tests at the urging of his coach and being found to have a learning disability, he turned his life around, and ultimately transferred to Southern Connecticut State. The university’s men’s soccer program was then a Division II powerhouse. Mr. Meredith played on the 1990 N.C.A.A. championship team, then embarked on a career coaching soccer and teaching physical education.

Robert Kehoe, director of college programs for the National Soccer Coaches Association of America, said he first met Mr. Meredith in 1996 and worked closely with the Yale women’s team for the next several years as part of a development workshop he used to conduct.

“He had a lot of credibility because he was a very good player in his own right,” Mr. Kehoe said.

Mr. Meredith quickly fostered an energetic atmosphere. He required players to wear costumes for Halloween practice. He bought bagels and extra food on his own dime for long bus rides to away games, while good-naturedly enduring the film “Dirty Dancing” at his players’ behest.

Yale enjoyed success in the mid-2000s, with the 2005 team reaching the third round of the N.C.A.A. tournament, knocking out third-seeded Duke in the process. Mr. Meredith coached several Ivy League players of the year and an all-American second-teamer who was profiled by ESPN. Meredith Speck, class of 2015, was the first Yale player in the National Women’s Soccer League, according to Yale's alumni magazine.

“The thing I remember is how professionally he treated us,” said Theryn Gibbons, who was a member of Meredith’s first recruiting class in 1996 and now ranks third on Yale’s scoring list. “Refs were calling me Babe, and Rudy was never like that — we were athletes. He was very respectful, very sensitive.”

If anything, Ms. Gibbons said, Mr. Meredith sometimes seemed intimidated by the aura of Yale, and tried hard to be liked.

“He’s not sophisticated by any means, and I know he would defer to people who he thought were smarter,” said Ms. Gibbons, who later became a federal prosecutor. “He’s very trusting, and gullible for sure.”

She added, “I’m not condoning what is alleged, but he’s family, and you stand by family.”

Mr. Meredith’s wife, Eva Bergsten Meredith, was also a familiar presence at Yale soccer events. A former national team player for Sweden, she is the longtime women’s soccer coach at Wesleyan, and has also run, with her husband, Bulldog Cardinal soccer camp for many years.

Now, Mr. Flaherty is listed on Yale’s website as simply the Loring Family coach. It was not immediately clear when or why Yale made the change. A university spokesman said Mr. Meredith was not involved in funding and naming the position.

In recent years, Yale’s teams did not perform as well as they had in the 2000s, and players and friends began to suspect that Mr. Meredith was no longer as gung-ho about soccer.

Adele Jackson-Gibson, a Yale goalkeeper who graduated in 2013 and is now a freelance writer in Brooklyn, said she “could feel people become more defeated over time.” She added, “People seem tired and a little bit checked out.”

Some players, speaking on condition of anonymity so as not to be ensnared in the investigation, also began to notice a player or two, every couple of years, who did not belong on a Division I team, based on their skill level. Some of those players came from wealthy families, prompting speculation that their parents had donated money in exchange for coveted recruiting spots.

In August 2017, the Merediths purchased a vacation home in Fernandina Beach, Fla., for $125,000, and took out a construction loan for $359,250, records show. The next month, Mr. Meredith was badly shaken, friends say, by the unexpected death of Fritz Rodriguez, a longtime assistant coach who had been Mr. Meredith’s roommate and teammate in college. So his resignation in November 2018 did not come as a complete surprise to some.

What few knew, of course, was that he had been cooperating with federal authorities for roughly half a year.

A Yale spokesman said the university learned about the scheme and the federal investigation only after the announcement that he was leaving.

Mr. Duffy, the M.C. at the Hall of Fame ceremony, summed up the feelings of many people close to Mr. Meredith when he said that he was still processing the gravity of the scandal.

“In the soccer community, we’re saddened by Rudy’s personal involvement, whatever that may be,” he said. “I think more people are angry that more deserving players were overlooked.”