Five of Australia's greatest basketballers have taken up residence on the side of a stadium owned by the AFL. 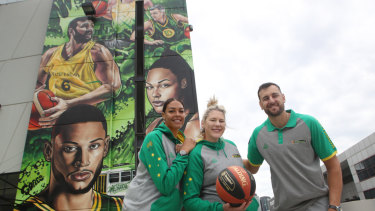 Along with the mural is a basketball hoop and a three-on-three court, which is available for public use in the lead-up to the two Australian Boomers v Team USA games in August and the FIBA World Cup in China in September.

Bogut, Cambage and Jackson were at the unveiling on Monday and stared up in wonder at the artwork by noted graffiti artist Sofles after being commissioned by Visit Victoria and Basketball Australia.

Bogut thought the artist made him look better than real life, Cambage laughed at the artist's choice of her in a sports bra while Jackson marvelled at her youthful appearance with her toddler son Harry watching on.

"A bit of Photoshop. I look better up there than I do in real life, so that always helps," Bogut said.

"It is a great honour to be on a wall with legends of Australian Basketball at the home of essentially the home of the AFL.

"That is even better to have basketball involved here where AFL is king is a pretty important step for Australian basketball."

Cambage, who starred for the Opals in their silver medal campaign at last year's FIBA Women's World Cup, knew exactly which photo was used and approved of the likeness.

"I like that they have done me without a shirt on, I'm in a bra, no jersey, that's very me," Cambage said.

"I know the photo they used. It was a photo shoot before the Rio Olympics for Who magazine.

"But it's very cool. We don't get this kind of recognition in Australia and it's so exciting they have Team USA coming out here in August.

"It's a big couple of years coming up for the Boomers and the Opals heading into the Tokyo Olympics in 2020."

More than 90,000 of the tickets for August's two-game series have been sold and Bogut, a life-long Essendon AFL supporter, looks forward to seeing some of the world's best basketballers running around where the AFL's local stars usually shine.

While Australia's best players have long started on foreign soil, the new mural gives some overdue fanfare here at home.

"We are proud to have Ben as an Australian basketballer and he will be a part of our national team soon enough," Bogut said.

"He is doing us proud over there.

"It is a big day for Australian basketball."