The Australian Diamonds know World Cup preparation isn't rocket science, but can a quantum physics professor be their secret weapon?

The Diamonds finished a week-long camp in Canberra on Friday, with coach Lisa Alexander creating a training and game environment to replicate the draining schedule they'll face at the World Cup in July. 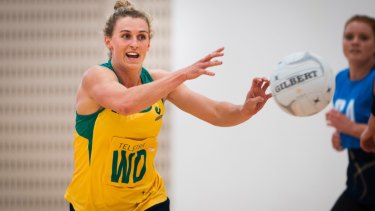 Gabi Simpson said the training camp in Canberra was a crucial building block for the World Cup.Credit:Elesa Kurtz

The players monitored what and when they ate as well as sleeping patterns to give them an idea of what they'll need to do to defend their title in Liverpool.

But Alexander also invited 2018 Australian of the year Michelle Simmons into the inner sanctum to provide her players with a different perspective on work ethic. 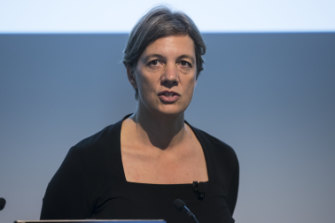 Michelle Simmons is the director of the Australian Research Council Center of Excellence for Quantum Computing.Credit:Louie Douvis

Simmons is a University of NSW professor of physics and was recognised for her pioneering researching and leadership in quantum computing.

"She talked about her journey and where's she's got to, and how she works in a team to achieve the best results," said Diamonds vice-captain Gabi Simpson.

"It's a competitive environment because every scientist wants to be the best they can be, but it only works when they work as a team. It was really amazing to hear from her, quite inspiring.

"It's so important because if you only hear from the same people every time, you can get complacent in your own bubble of understanding.

"The more people we get in from different areas of life creates different perspectives and shines light on new things we can do ourselves. The worst thing to do is to become stagnant. You have to find new ways to get bigger and better."

The Diamonds split up on Friday to return to their Super Netball franchises to fine-tune preparations for the season, which starts next month.

But Alexander was equally focused on cramming as much information and preparation into the camp given the Super Netball campaign will leave minimal time to plan for the World Cup.

The Diamonds will return to Canberra for their final camp in June, with the Diamonds scheduled to play four games in four days.

"The main purpose of this camp has been to emulate what the World Cup will be like, so it's been very match-play based," Simpson said.

"It's been extremely high intensity and that's been good … getting the understanding of how to prepare for back to back games.

"It's understanding yourself and how your body responds to backing up the next day. There's a physical side, a nutrition side of what you eat and if you have caffeine, and how you sleep.

"We may not nail it at this camp, but it's a really good learning tool for the World Cup."

Simpson will lead the Queensland Firebirds into the Super Netball season, starting with a clash against the Melbourne Vixens on April 27.

It will be the start of the Firebirds' journey without former Australian skipper Laura Geitz, who retired at the end of last year.

"The beauty of having Geitzy in the team is that she was always going to leave it in a better place than when she started," Simpson said.

"What she has done is set up a great platform for us … our young defenders were able to learn from her and she was absolutely vital in setting up the culture. She's left us with a blueprint of how to have success. We couldn't ask anything more, and it's exciting to see what these young defenders bring."