Yes, yes, yes I know. At the very mention of the word “Australian sport”, there will those of you grazing in these rather more intellectual pages who will identify with the great Fran Leibowitz: “When it comes to sports I am not particularly interested. Generally speaking, I look upon them as dangerous and tiring activities performed by people with whom I share nothing except the right to trial by jury.”

But stay with me anyway. For you see sports fans, and the rest of you (sniff) this is not just another week in the history of Australian sports. For this, friends, this, as Paul Keating might remark, is “the one that brings home the bacon”. Finely sliced English bacon, to be precise. 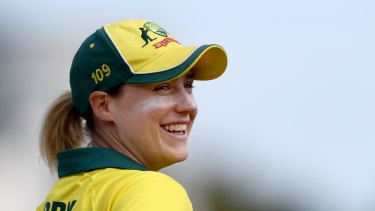 Ellyse Perry during the third one-day international of the women’s Ashes series,Credit:PA

Which is why this week, take a peek, our cup doth runneth over as never before. In an extraordinary alignment of the stars, on Thursday the Australian one-day cricket team will take on England at Edgbaston – and thrash them – in the semi-finals of the World Cup. On the same day in Liverpool our women’s netball team, the Diamonds begin their campaign in the Netball World Cup. As if you didn’t know, the dinky-di Diamonds are the incumbent world champions, while England are the incumbent Commonwealth Game champions. Could there be any greater set-up for the final than to have Australia play England in the grand final, in England, and flog them like a convict caught with the wife of Governor Fotheringbottom? This is all while the women’s Ashes campaign also going on, with our women, in the latest match, having bowled out England for – dot three, carry five, subtract nine – three-fifths of bugger-all and our own Ellyse Perry taking an extraordinary 7 for 22.

Couldn’t anything top this? Yes – how about an Indigenous woman winning Wimbledon, the first Australian woman to do so since 1980 when another Indigenous woman in Evonne Goolagong  Cawley accomplished that feat? Unless the unthinkable happens as this goes to press – step forward, World No.1 tennis player, our own Ash Barty from Ipswich!

In sum, it is all coming together. Australians all let us rejoice, for we are now doing in superb synchronicity what we do best. Led by our fine women, we are flogging the English at their own game, and doing it with class that would make a brown dog weep.

Rest in Peace, Eddie Trickett. We’ve got this.