Just over six weeks away from its Provincial Championship qualifier, Kembla gets a real entree to the main course today when a stack of metro stables saddle up runners on a super competitive eight-race card.

And no runner will be under a wider watchful eye than royally-bred 3YO debutant Tuesday Special, from the Warwick Farm base of Bjorn Baker. 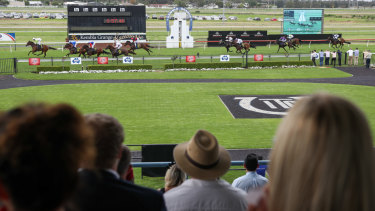 A daughter of the prolific Snitzel from group 1 winner Tuesday Joy, Tuesday Special faces the starter for the first time in a Maiden Hcp (Race 2) over 1300m. Coming off a winning trial at home and an even effort under a hold at Randwick, she looks ready to perform – although while the market will no doubt keep her very safe, she's far from a good thing.

Godolphin filly Nanda Devi is ready to peak fourth-up after finding the line from well back in all three runs this prep, and from gate three, she should only be a few lengths off them when they turn.

And the other chief rival is promising Randwick filly Smart Decision who came off a winning trial to debut with a strong closing effort at Warwick Farm (1400m) in a decent form race. With natural improvement, and on a track that should suit better, it's hard to see her not being in the finish again.

Elsewhere on a strong betting program, punters can look forward to payback aboard 3YO Randwick filly Le Amoureux in a Maiden Hcp (Race 7) over the mile.

The daughter of Redoubte's Choice missed by a whisker two runs back at Newcastle before covering ground back and copping a vital check at the 150m last start at Warwick Farm over 1400m. She may not have arrived in time even with a clear passage that day, but back out to the mile today on a much bigger track will be right up her alley.

And for those hunting value, don't dismiss Randwick 4YO Echo Princess in the CL1 Hcp (Race 4) over 1400m for the fillies and mares.

A debut winner at Newcastle, she fought on hard last run behind Sure Knee at Canterbury (1550m) after doing plenty of work in the breeze on a solid speed. Back in trip today from a nice gate is more to her liking and she looks over the odds.