LEGENDARY Barcelona hardman Carles Puyol has gone through the pane barrier – and come out bloodied but grinning wider than ever.

The ex-Spain defender was pictured bare-topped and showing off a badly-cut arm after reportedly falling through a glass door. 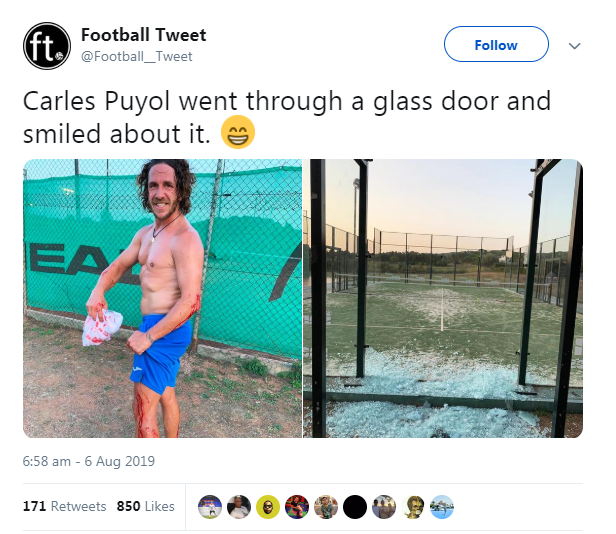 Puyol, 41, proved he is as tough as ever five years after retiring, still justifying his nickname of "The Wall", given him by Nou Camp fans.

And supporters on social media were quick to share amusement, amazement and awe over his accident.

One insisted: "He's a beast couldn't expect anything less ? ?"

Another suggested: "The glass door had the worst of it."

And the finger of blame was jokingly pointed at another infamous Spanish player in this post: "He had breakfast with [Diego] Costa."

One-club man Puyol, who won 100 caps, was once described by a Barcelona doctor as "the strongest, who has the quickest reactions, and who has the most explosive strength".

True, Puyol's reflexes might now be questioned after his glass tumbling.

But his heart and steel seem as big as during his 15-year Barca career.

Puyol has claimed in the past he made up for his technical failings through sheer willpower.

He said: "I work harder than the others. I'm like the student who is not as clever, but revises for his exams and does OK."

And as tweets poured in today after Puyol's shattering experience, one fan said: "Come and see your legend, I always knew this guy wasn't normal."

Another spoke for many by saying: "Sounds about right to be fair ? warrior."