They opened the gates at last on Thursday, six months after the end of a brief and surreal regular season played before no fans. Opening day for 2021 brought none of the usual standing-room-only crowds; with limited capacities, the games looked more like sleepy gatherings in mid-April. But the buzz was authentic, and there’s nothing like the real thing.

“Having fans here will make a big difference,” said the Milwaukee Brewers owner Mark Attanasio, whose team hosted the Minnesota Twins. “We came to games here last year to see some cardboard cutouts, empty stands, fake sound. It was like the twilight zone.”

We now resume our regularly scheduled broadcasts. The coronavirus pandemic pushed back last year’s openers to late July, with only 60 games before the playoffs. Now, the first day of April meant the first day for baseball, and a scene that would have been impossible last summer.

The first home run of the new year sliced through swirling snow flurries in Detroit. It was so confusing that the hitter, Miguel Cabrera — who is quite familiar with home runs, having swatted 488 in his career — slid into second on his trip around the bases, thinking he had hit a double.

It was brighter elsewhere in the Midwest. The ivy isn’t growing yet at Wrigley Field in chilly Chicago, where the Cubs hosted the Pittsburgh Pirates, but Ryne Sandberg stood in the sun-splashed bleachers during the seventh-inning stretch and sang “Take Me Out to the Ball Game” with the fans. They swarmed around Sandberg — who wants to socially distance with a Hall of Famer? — but wore masks, as instructed.

A few players wore masks on the field, too, like the Brewers’ Lorenzo Cain, who opted out of last season after a few games, and the Philadelphia Phillies’ Didi Gregorius, who has a chronic kidney disorder. Cain scored the winning run in the 10th inning for Milwaukee, and Gregorius drew an intentional walk in the 10th for the Phillies, setting up Jean Segura’s game-winning single and bringing joy to the 8,529 real, live people on hand.

“So much better, so much better — that’s how it should be,” Phillies starter Aaron Nola said. “Hopefully it’ll be more soon, but it was good to hear humans in the stands.”

With more than 34,000 seats empty, though, there were ever-present reminders of the pandemic, like static intruding on a clear signal. 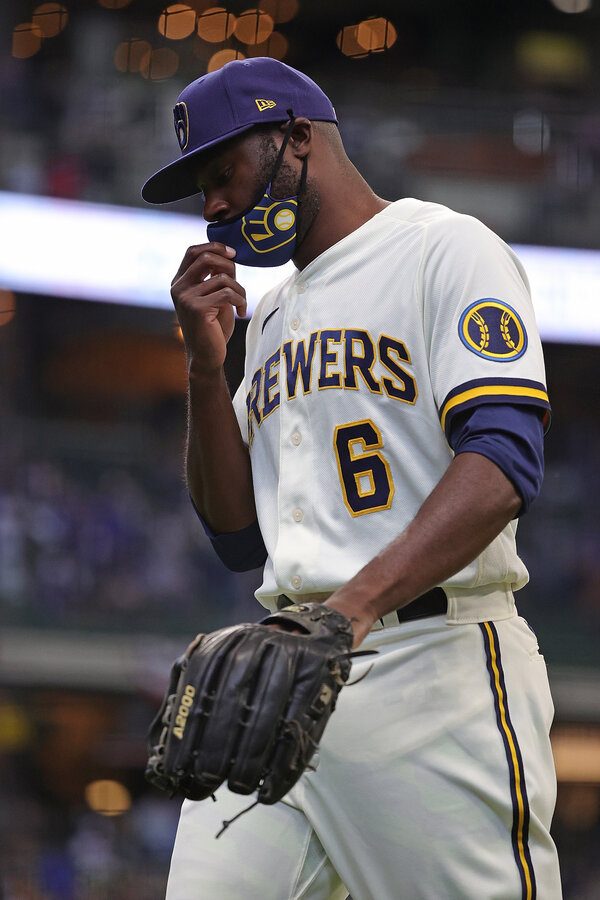 There were other reminders of the pandemic, like static intruding on a clear signal.

In the Bronx, the former Yankee Bernie Williams made the ceremonial first pitch virtually. In Philadelphia, the Atlanta Braves’ starter, Max Fried, backtracked on his way off the mound between innings; he needed to retrieve his personal rosin bag, with pitchers still discouraged from sharing one. In San Diego, fans gathered on the grass near the Tony Gwynn statue outside the Padres’ ballpark, but stayed within squared-off spaces: “Pods for watching the Pads,” as Bill Shaikin of The Los Angeles Times wrote in a tweet.

Most sobering, clearly, was the postponement of the Nationals’ opener, against the Mets in Washington, after a Nationals player tested positive for the coronavirus. Because several teammates and a staff member were found to have been in close contact with the player, Major League Baseball said the teams would not open on Friday, either.

The game was scheduled as the prime-time attraction for ESPN, with a matchup of aces in the Mets’ Jacob deGrom and the Nationals’ Max Scherzer. The fact that M.L.B. postponed it anyway seems ominous; last summer, positive tests tended to trigger complicated schedule shuffling made easier by exclusively regional play and frequent doubleheaders in which games lasted only seven innings.

In the case of the Mets and the Nationals, divisional foes who meet frequently, rescheduling one game will be relatively easy. The league desperately wants to avoid the kinds of outbreaks that derailed the Miami Marlins and the St. Louis Cardinals early last season, and believes it can do so through contact tracing and extreme caution.

Before spring training, the league had proposed to the union a 154-game schedule (with the full pay of a typical 162-game regular season), with games to begin in early May. That timetable would have given more time for players to be vaccinated, if they wished, but other elements of the proposal made it unworkable for the players, and the schedule proceeded as usual.

Over all, of course, there is nothing normal about life in a pandemic, and with the Nationals and the Mets unable to play, M.L.B. again missed out on its goal of having all 30 teams start the season on the same day. For one reason or another, that has not happened since 1968, when there were only 20 teams.

Then again, even without the virus-related postponement, Thursday was bound to be less than complete. The reason was the most mundane, and perhaps the most predictable, of all: bad weather in the Northeast.

With rain forecast for over Fenway Park, the Boston Red Sox announced at 9 a.m. that they had called off their opener with the Baltimore Orioles. The teams will try again on Friday afternoon, weather — and coronavirus test results — permitting.