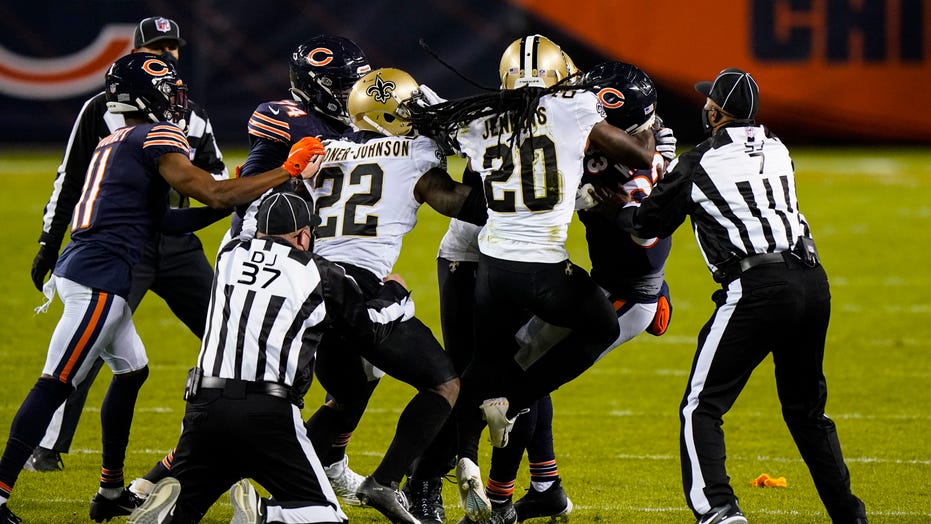 Chicago Bears wide receiver Javon Wims was ejected from the game against New Orleans on Sunday after sucker-punching Saints cornerback C.J. Gardner-Johnson and is facing a possible suspension.

According to the NFL Network, the fight seemingly began when Gardner-Johnson snatched Wims’ mouthguard from his facemask after the two exchanged words. Wims had to wait about 11 minutes to retaliate after being subbed out.

When he did, he attempted to pull Gardner-Johnson’s mouthguard but was unsuccessful — so he punched him in the helmet twice.

Gardner-Johnson didn’t appear to react to the first hit but Saints teammate Janoris Jenkins jumped on Wims’ back after the second punch in an attempt to break up the fight.

Wims was ejected and Gardner-Johnson later took to Instagram to downplay the attack.

INJURED CHARGERS  PLAYERS SWIPES AT TEAM AFTER BRONCOS LOSS: ‘TO OUR FANS, YOU DESERVE BETTER’

Gardner-Johnson was seen instigating the Bears prior to the fight. He had put his finger in the face of the Bears' Anthony Miller before snatching Wims’ mouthguard.

Wims also accused him of spitting on him prior to the brawl.

Sources told the NFL Network that the league is reviewing the incident and is considering a possible suspension.