Beauty Generation is set to defend his title in the Hong Kong Mile on Sunday, which is part of the quartet of Hong Kong International Races, but many in the industry, including his trainer, say they believe he is not the same horse he was a year ago. In fact, they are counting on it. The gelding has continued to improve since then and is now the darling of the Hong Kong racing industry. All eyes will be on him.

While it can be hard to gauge if a horse who is constantly winning is actually progressing, Beauty Generation has the statistics to back it up. Multiple racing entities rate him as one of the best horses in the world, and in his last start, the Jockey Club Mile, Beauty Generation broke a track record that stood for almost a decade.

“He’s gone to the next level from last year,” said his trainer, John Moore. “His last race was the most impressive. He just went by them, and that was the end of it. It was reminding me of the days of Able Friend — that he could come from behind and just run over the top of them and run a sensational time.”

Moore is no stranger to success. The 68-year-old is Hong Kong’s longest-serving trainer and the one with the most wins. He’s been named champion trainer seven times, and his stable is responsible for the last six runners to be named Hong Kong Horse of the Year, including Beauty Generation and Able Friend.

Although Beauty Generation won top honors last season, it was not a clear-cut case of superiority. The Hong Kong racing year starts in September, and things have changed since the 2018-19 season began.

“Beauty Generation was named Hong Kong Horse of the Year last season on the strength of three Group 1 victories, but the wins were a bit ho-hum as opposed to eye-catching,” said Bill Nader, the Hong Kong Jockey Club’s director of racing business and operations. “Many people thought he deserved the Horse of the Year award, but Pakistan Star was actually the better horse, so his reputation and popularity were a bit restrained. 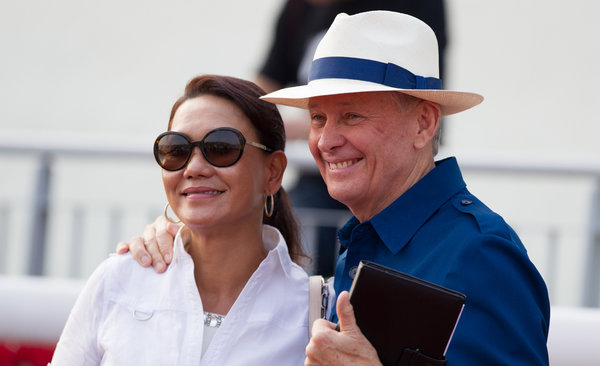 “This season, Beauty Generation has gone to a different level, and everyone places him in an elite class. His reputation is something like a four-legged rock star. His three wins this season have been spectacular, and the Hong Kong love affair has taken off.”

Unlike many major racing jurisdictions, Hong Kong does not have a breeding program, but rather imports its horses from other locations. Beauty Generation was bred in New Zealand and competitive at the highest levels in Australia before Moore’s son, George, who is a bloodstock agent, selected him to be bought privately for Patrick Kwok Ho Chuen.

“We paid a lot of money for him,” Moore said. “Of course, now it seems like just a little because he’s earned 46.4 million Hong Kong dollars ($5.9 million) and might break the earnings record in Hong Kong.”

One quirk of Hong Kong racing is that owners are allowed to change a horse’s name once it is imported, even if it has already raced. Beauty Generation was known as Montaigne during his Australian career. The Kwok family owns SaSa, a retailer of cosmetics in Hong Kong, and they prefer to rename their horses and incorporate the word Beauty.

“Patrick is a second-generation horse owner, following his father, Simon, and mother, Eleanor,” Nader said. “The family has combined to win the Hong Kong Mile three times over the last nine years with three different horses. Beauty Flash won in 2010, Beauty Only won in 2016 and Beauty Generation won last year. The foundation for any successful racing jurisdiction is to have great horse owners, and we are very fortunate to have the entire Kwok family as well as many other top owners to help build our success.”

Beauty Generation made his first start in Hong Kong in December 2016 and in the past two years he has thrived in his new home. Along with his soundness, his adjustment to his new life is one of the things Moore attributes to his continual improvement.

“He has settled into the environment, and he loves the way he is treated, with respect to his groom and the staff attention,” he said. “It is a team effort that has taken him to this next level. It’s not just me. I do so much, but I also need the right people behind me to carry out what is necessary.”

Being the stable star has its perks. Many racehorses have a sweet tooth, and in America they will often be fed peppermints as a treat, while in Europe they get Polo mints. Beauty Generation has a fondness for Polo mints, so his owner brings them back from England.

“Every time he goes through Heathrow, he will stop in WHSmith and buy him some,” Moore said. “I always tell him to take the whole shelf, and he comes home with a bag full. Beauty Generation will follow me around like my pet dog for Polos. He’s an addict. There are little things, traits about this horse, that make him a character, and I am very lucky to have him.”

“One of the things that makes Hong Kong racing great is returning champions like Beauty Generation,” Nader said. “About 98 percent of the horse population here are geldings, so horses have long careers. The fan base can really connect to the top horses, and it is exciting to see a horse like Beauty Generation take on the best in the world.”

Moore, who comes from a respected racing family and began training in Hong Kong in 1985, remains a dominant force, but his tenure as a trainer there is nearing its end. Under Hong Kong’s rules of racing, he must retire in 2020.

“The retirement age was previously 65, but we extended it to 70 for John and also for other top performing trainers who will benefit later, such as Tony Cruz and John Size,” Nader said. “The reason for the mandatory retirement age is there is a limit of approximately 24 trainers to be licensed in Hong Kong at any one time. Eventually, there must be a time to say goodbye.”

The Australian-born Moore has not decided what he will do when the time comes, but his focus is on watching the horses in his care perform.

“It is compulsory retirement,” he said. “Age is just a number to me, and I don’t feel like I am old. The best feeling these days is getting a horse, whether you buy them as a yearling or as a tried horse, and taking them to the Group 1 level, and Beauty Generation has done that. He has given me that feeling.

“This horse, if he wins the Mile on Sunday, I would think he would be the Horse of the Year again, even though we’ve only gone half a season so far. I don’t think there is any horse out there that would be able to emulate what he’s done.”