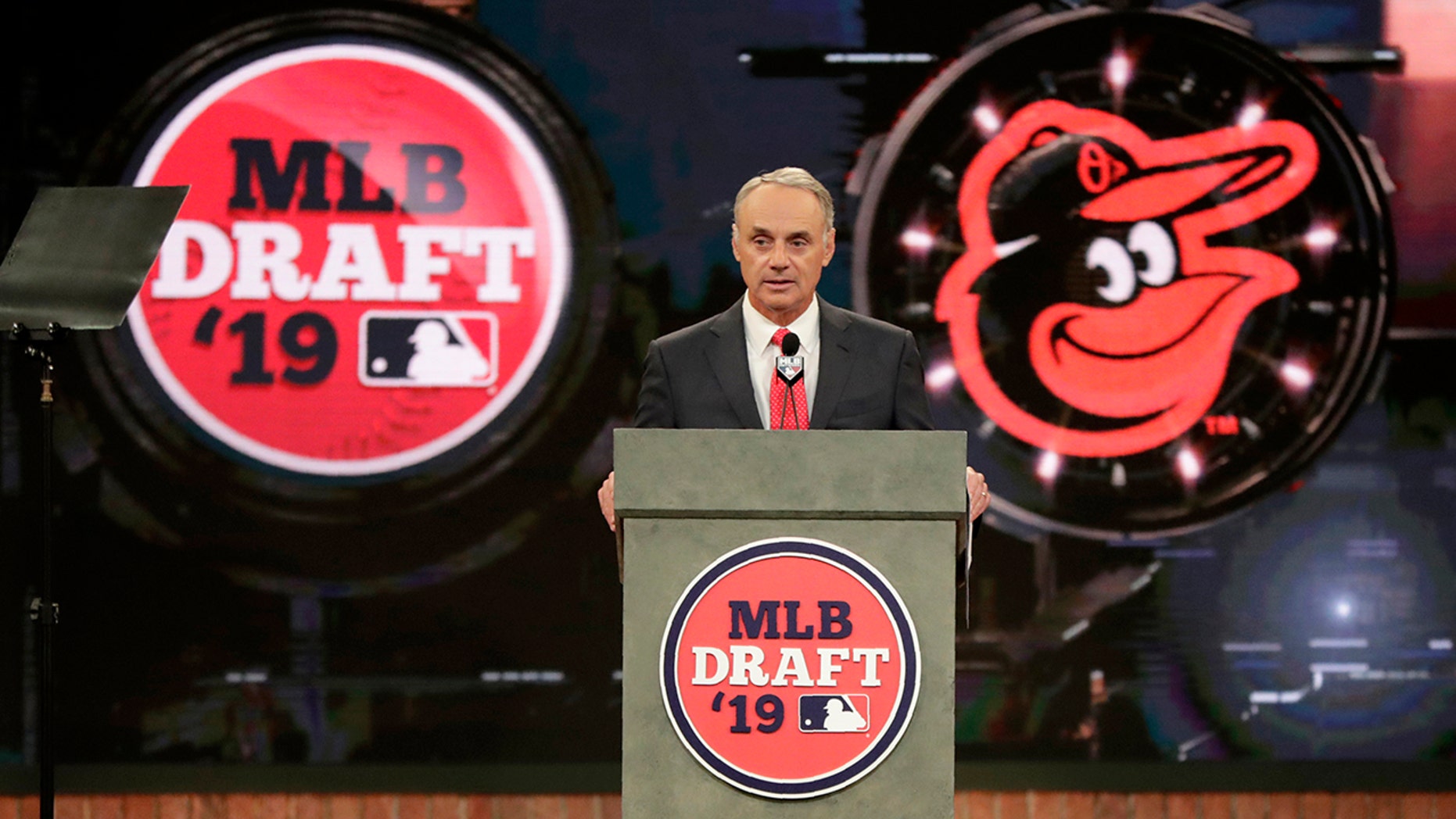 Major League Baseball Commissioner Rob Manfred announces Adley Rutschman, a catcher from Oregon State University, as the No. 1 selection by the Baltimore Orioles in the first round of the Major League Baseball draft, Monday, June 3, 2019, in Secaucus, N.J. (AP Photo/Julio Cortez)

Pitchers took a backseat at the Major League Baseball draft.

On a night when a record 22 position players and nine shortstops were chosen in the first round, the rebuilding Baltimore Orioles went for a cornerstone at catcher, selecting Oregon State switch-hitter Adley Rutschman with the top pick Monday.

Rutschman became the first catcher to go No. 1 since Minnesota tabbed Joe Mauer in 2001.

"He's everything you want and he plays a premium defensive position with athleticism that gives him versatility to play elsewhere, as needed," first-year Baltimore general manager Mike Elias said in a video statement posted on the team's Twitter account. "A future fixture for this organization." 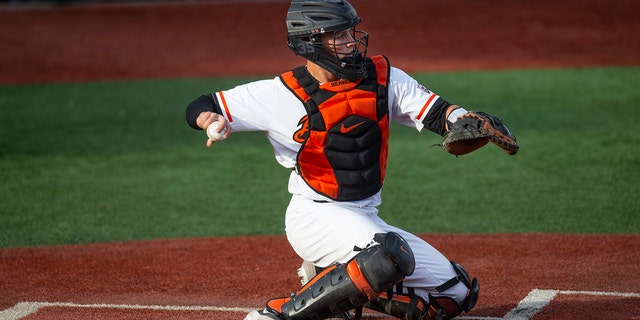 The only other time the Orioles led off the draft they took LSU pitcher Ben McDonald in 1989.

The 21-year-old Rutschman had been the favorite to go first overall since he led the Beavers to the College World Series championship last year and was selected the most outstanding player.

He followed that up with a monster junior season, batting .411 with 17 homers, 58 RBIs and a school-record 76 walks. On defense, he threw out 13 of 27 runners attempting to steal.

Here are some more numbers, too: After getting drafted in the 40th round by Seattle three years ago, Rutschman is in line for a potential $8,415,300 signing bonus — the assigned slot value for this year's top pick.

"It's unbelievable," he said from Goss Stadium in Corvallis, Oregon. "Just to look back on how I was as a kid and seeing what my expectations were, how far I've come from there, it's special."

Other things to know about the first night, which featured 78 picks at MLB Network studios:

After the Orioles, up next at No. 2 were the Kansas City Royals and they grabbed Texas high school shortstop Bobby Witt Jr., son of the former big league pitcher. The younger Witt has draft-day bragging rights on his father, who won 142 games over 16 seasons after being selected No. 3 overall by the Texas Rangers in 1985.

In a draft light on premier mound prospects, only 12 of the 34 first-round picks were pitchers.

The first off the board was TCU left-hander Nick Lodolo at No. 7 to the Cincinnati Reds. Lodolo was the 41st overall pick by Pittsburgh in 2016 — the highest selection to go unsigned that year.

It was the first time since the draft began in 1965 that no pitchers were taken within the first six picks.

All four prospects in attendance were selected within the first 33 picks. With excited family members alongside, the players donned caps and jerseys of their new teams:

—Florida high school right-hander Brennan Malone went 33rd to the Arizona Diamondbacks, who had four first-round picks and seven of the first 75 selections, a couple of them compensation for losing free agents Patrick Corbin and A.J. Pollock.

Hall of Fame pitcher Randy Johnson, representing the Diamondbacks, announced the pick from the podium.

"That was awesome," a beaming Malone said.

After a prep playoff game Saturday night, Baty said he woke up about 3 a.m. to catch a flight to New York, where he attended the Red Sox-Yankees game Sunday night. He had a 7 a.m. flight Tuesday to head home for early afternoon baseball practice ahead of a state tournament game Friday.

"It's a pretty jam-packed schedule," he said around midnight on a Mets conference call. "It's pretty fun, too."

Rutledge is from St. Louis, same as the Nationals ace he already looks up to.

"I want to be teammates with Max Scherzer as soon as I can," Rutledge said.

The only set of teammates — college or high school — drafted in the first round came from the University of California. Slugging first baseman Andrew Vaughn went No. 3 to the Chicago White Sox, and catcher Korey Lee at No. 32 to the Houston Astros.

ONLY GAME IN TOWN

Looking to bring more attention to the draft, MLB scheduled only three late West Coast games Monday night. The Angels and Cubs also played in the afternoon to make up a rainout in Chicago.

"I think two things are happening that are really important," Commissioner Rob Manfred said. "I think people know a lot more about the players that are being selected than they used to, and as a result there's a lot more interest. We do believe clearing the game schedule is important so that the focus is on what goes on here tonight. This is, after all, our future — the lifeblood of the game. And we will continue to look for ways to make this as big an event as we possibly can."