Manchester Originals’ spinners tied the Phoenix up in knots after they opted to bat first, with Alex Hartley, Emma Lamb and Sophie Ecclestone restricting them to 113 – the lowest total of the Hundred so far.

Lamb finished with 3-16 and Ecclestone 2-14, with Amy Jones (31 from 17 balls) and Gwen Davies – who made 20 from 17 despite pulling up with cramp and briefly calling for a runner – getting to grips with the conditions. 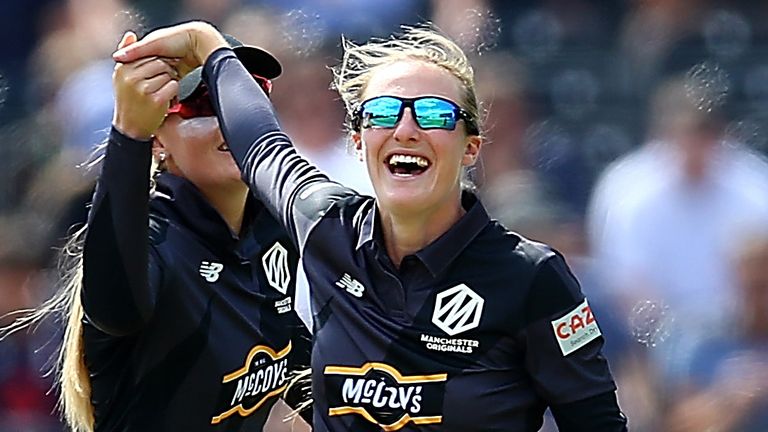 However, anything the Originals could do, Birmingham’s spinners could do just as well – or better – and the turning wicket, slow outfield and long boundaries ensured the home side found it difficult to score.

Harmanpreet Kaur batted sensibly for an undefeated 49 from 47 but, aside from her stand of 42 with Ellie Threlkeld, the Originals were lacking partnerships and came up short on 93.

Despite the innings crumbling around her, Phoenix captain Amy Jones was in pugnacious mood, threatening to bat her side back into contention with a knock of 31 from 17.

Sophie Ecclestone gets bragging rights over her England team-mate as she sends Amy Jones packing for 31.

But she misjudged the flight from Sophie Ecclestone and was clean bowled taking a swing at her England team-mate, which more or less wiped out Phoenix’s hopes of posting a total in the 120-130 region – not that it ultimately mattered!

Gordon set the tone in the second innings, dismissing Lamb leg before with her fourth ball and then removing the dangerous Lizelle Lee three deliveries later to set nerves jangling in the home camp.

The spinner was backed up by the rest of a solid Birmingham bowling unit which ensured the Originals were never able to gain traction in their fruitless bid to chase down 114.

CATCH OF THE MATCH

Not content with taking two early wickets in the Originals’ innings, Gordon also had a major hand in the third – or both hands, to be precise. She raced back from cover after Georgie Boyce chased a wide ball from Issy Wong and got a top edge, manoeuvring into position to take a diving catch over her shoulder.

The vast majority of Emma Lamb‘s 20 deliveries were spot on, but her first was perhaps the pick of the bunch, turning outside off stump and drawing Emily Arlott out of her crease.

Wicketkeeper Threlkeld did the rest, whipping off the bails as the Originals maintained pressure by picking up wickets at regular intervals.

Phoenix spinner Maqsood also merits a mention for a similar delivery that foxed Mignon du Preez later in the game, with the Originals batter stranded as Amy Jones took off the bails.

With the Phoenix fast running out of balls, Issy Wong launched a desperate slog at Kate Cross – only to lose both her wicket and her bat.

The bat flew away in the direction of midwicket, while the ball sailed off in the opposite direction to the waiting hands of Lizelle Lee, leaving a sheepish Wong to retrieve her stick of willow before making a hasty exit.

“Our spinners bowled really well but I felt we still gave maybe 20 runs away. To be honest in the context of the game the opposition bowled better than we did and certainly fielded better than us, especially on the boundaries with their sweepers.

“We found it difficult to hit boundaries and fair play to Phoenix – they bowled well and took the pace off the ball but turning ones into twos is certainly something we need to get better at as well as striking boundaries.”

“It’s really important for us to get that first win on the board and in a competition where the games come thick and fast it’s important to get up and running – hopefully we can keep moving forward from here.

“We were a few runs light so needed a good start and I’m glad I could help the team with that. It was a low scoring game but it was a used pitch and I think that’s probably the reason why.

“Fielding was important and we ran our twos well, which helped up pick up a few runs early on and Katie Mack was exceptional for us on the boundary.”

We’re back at Trent Bridge on Monday for another thrilling double header, with the Rockets hosting Northern Superchargers.

The women’s teams clash at 3pm, with the men’s fixture getting under way at 6pm.

Watch both games on Sky Sports The Hundred and Main Event, as well as the Sky Sports Cricket YouTube channel.

Watch The Hundred live on Sky Sports this summer!