Docherty missed all of the 2018 season after having a knee reconstruction in November last year and the new injury is to the same knee. He will miss another full season of football. 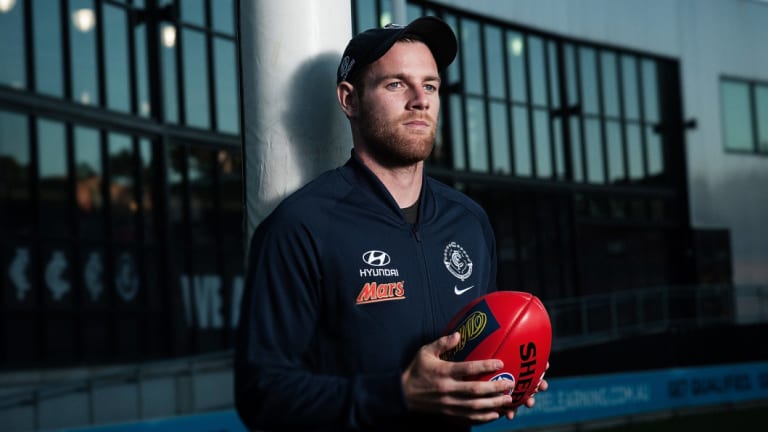 Sam Docherty has re-injured his knee and will require another knee reconstruction.Credit:Josh Robenstone

The running defender, recently named co-captain with Patrick Cripps, injured his knee at training on Monday morning. He suffered only minor discomfort but had a scan as a precautionary measure.

The scans revealed the damage was far worse than they had suspected from the innocuous incident.

"It's clearly a huge disappointment for Sam to experience such cruel luck, we are all feeling for him right now," Carlton's head of football Brad Lloyd said.

"The way he tackled his rehab this year was simply incredible and he could have played at the end of last season before the decision was made to hold him back.

"If the last 12 months have shown anything, it's that Sam is made of everything that is required to return to his elite best once again.

"Our entire football club – players, coaches, staff, members and supporters – will now support Sam to ensure he will complete his rehabilitation once again with the entire Carlton family by his side.”

The club will consider all options for treatment including LARS, but there has been a trend away from use of synthetic tissue for the reconstruction as the rate of recurrence is too high.

Docherty spoke only recently of addressing his fears of re-injury after returning to full training from his first knee reconstruction.

"Over repetition of doing that, you lose that. Once you go out on the footy field, [it's like] fans trying to heckle you. You don't notice them.

"Once you're out training you just don't notice anything with your body, you're just out there playing footy."

Docherty had felt strong enough late in the season from his recovery that he and the club even considered him coming back in the 2018 season.

Meanwhile Adelaide defender Daniel Talia will also have minor knee surgery after aggravating an old injury to his right knee.