CANELO ALVAREZ has been named as Sports Illustrated's pound-for-pound king in their latest top ten list.

The Mexican superstar is bidding to become the the first undisputed super-middleweight champion when he faces rival Caleb Plant on November 6. 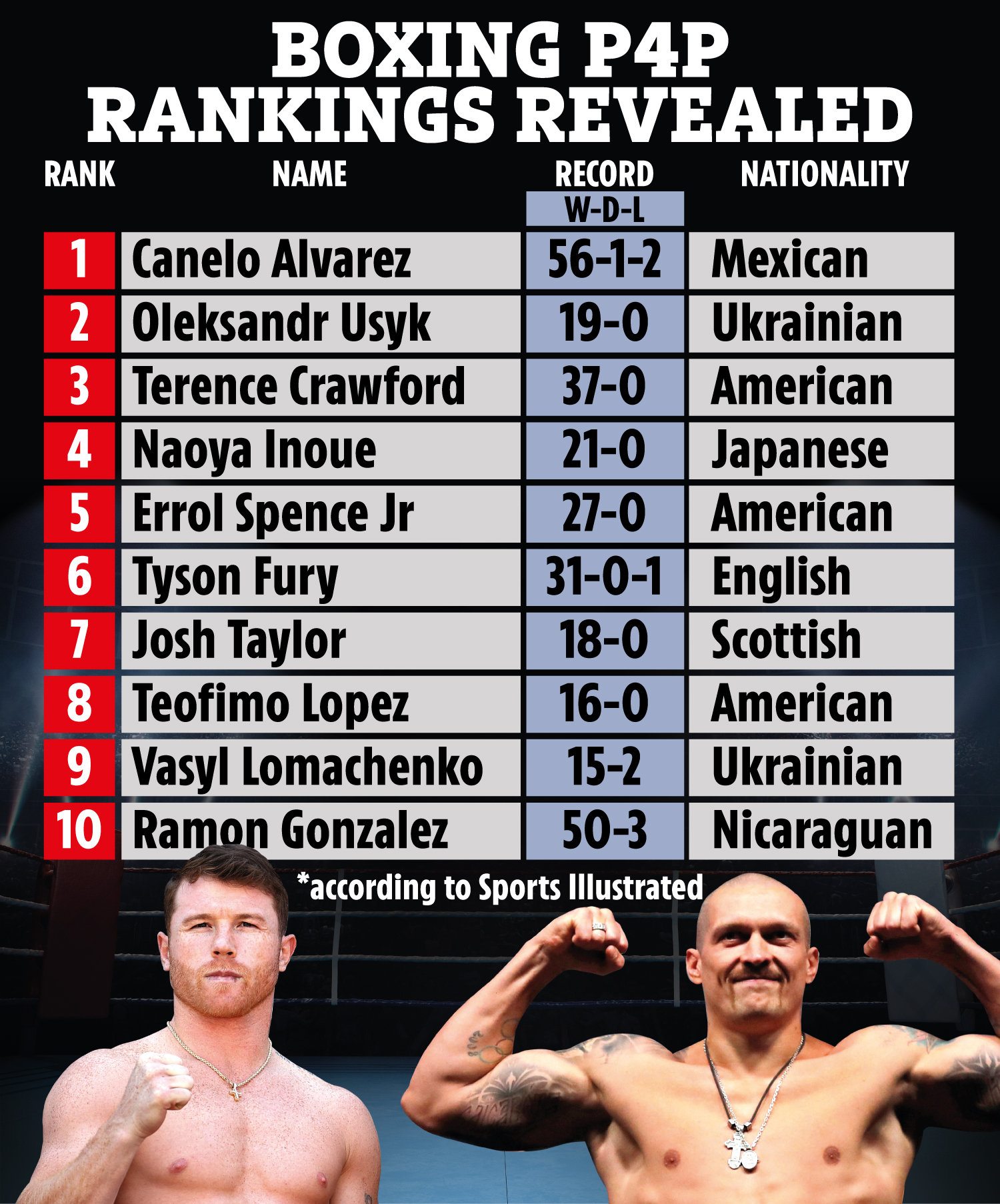 Alvarez, 31, forced Billy Joe Saunders into a stoppage in his last outing as he inflicted a broken eye socket on the British star.

The classy victory extended his record to 56-1-2, with his only defeat coming at the hands of Floyd Mayweather in 2013 when he was just 23.

There can be no denying that the four-weight world champion is one of the most talented boxers of his generation, and no surprise that he sits top of the pile in SI's list.

But what may come as a shock to fans is that there is no room in the top ten for Anthony Joshua.

The 2012 Olympic gold medallist suffered the second defeat of his professional career last month after being outpointed by Oleksandr Usyk.

After outclassing AJ to win the WBA, WBO and IBF heavyweight belts, Usyk has been named second behind Canelo in the P4P rankings.

Usyk will defend his new titles against the Watford native in 2022 after Joshua invoked an immediate rematch clause.

Third in the list is Kell Brook, Amir Khan and Ricky Burns' former foe Terence Crawford, who has won all 37 of his bouts.

The American, 34, defends his WBO welterweight title for the fifth time next month when he faces compatriot Shawn Porter.

Japanese knockout specialist Naoya Inoue is in fourth sport having blasted out 18 of his 21 opponents.

Bantamweight Inoue, 28, puts his unbeaten record on the line yet again in December when he defends his WBA, IBF and Ring Magazine straps against Aran Dipaen.

Completing the top five is welterweight Errol Spence Jr, who has won all 27 of his clashes inside the squared circle.

However he hasn't fought since last year after outpointing Danny Garcia to retain his WBC and IBF titles.

Tyson Fury, who was left out of the Ring's pound-for-pound list, follows in sixth place after his emphatic victory over Deontay Wilder.

Scottish star Josh Taylor is seventh, with the Tartan Tornado creating history in May after becoming the first Brit to become undisputed champion in the four-belt era.

Taylor outpointed Jose Ramirez in May as he floored his rival twice in their super-lightweight showdown.

Teofimo Lopez is eighth on the list after beating Vasyl Lomachenko in their lightweight contest last year, with the Ukrainian in ninth spot.

Nicaraguan ace Ramon Gonzalez has surprisingly taken the final place in the top ten, despite losing a split decision against Juan Francisco Estrada in March.

Many fans and pundits felt Chocolatito deserved the win, and he will have his chance to exact revenge on Estrada in their rematch.