JAMIE VARDY may have momentarily lost his lethal touch – but at least his understudy is finding his.

Kelechi Iheanacho followed up his leveller at Burnley on Wednesday with another fine finish to turn things around here. 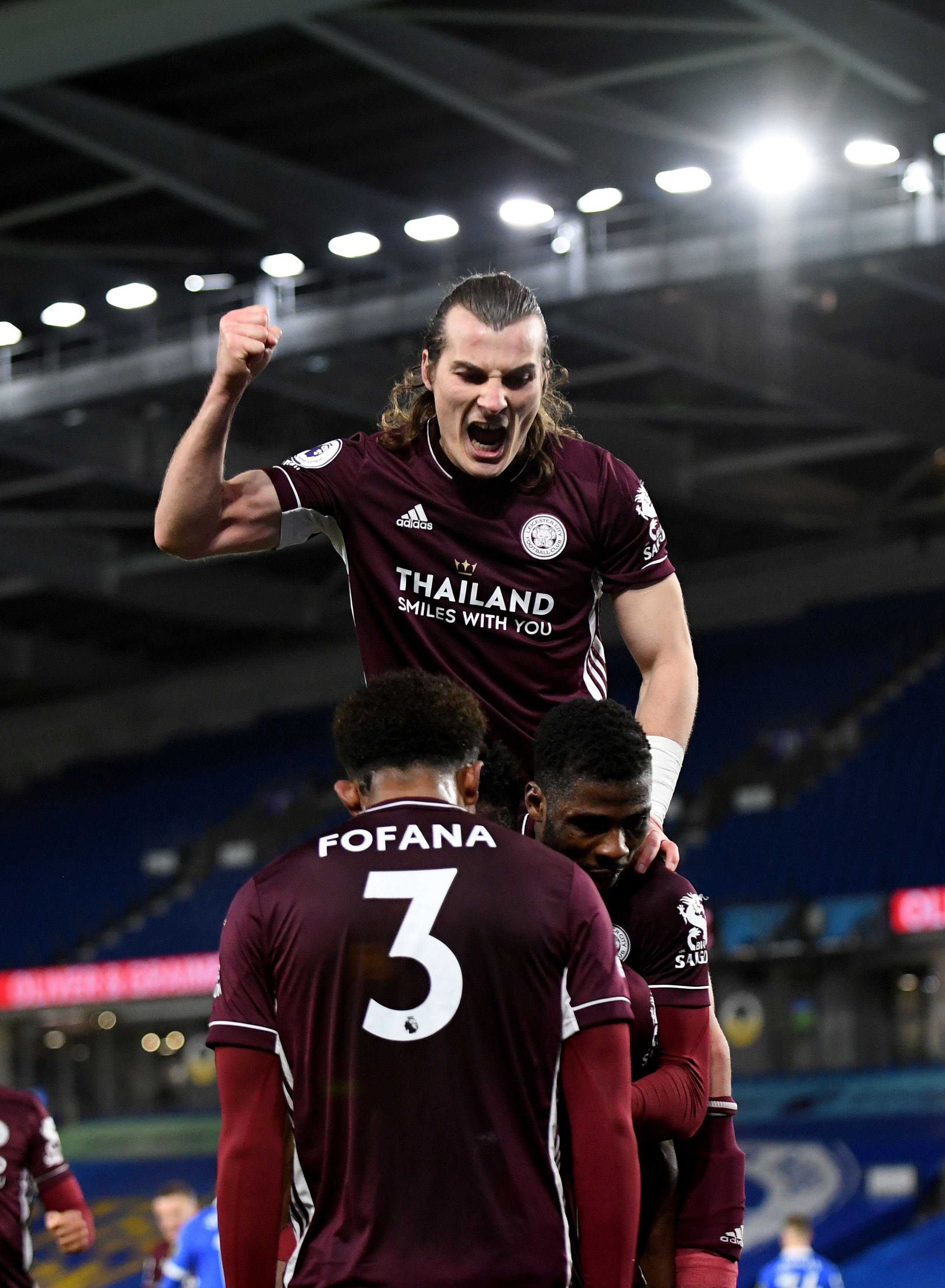 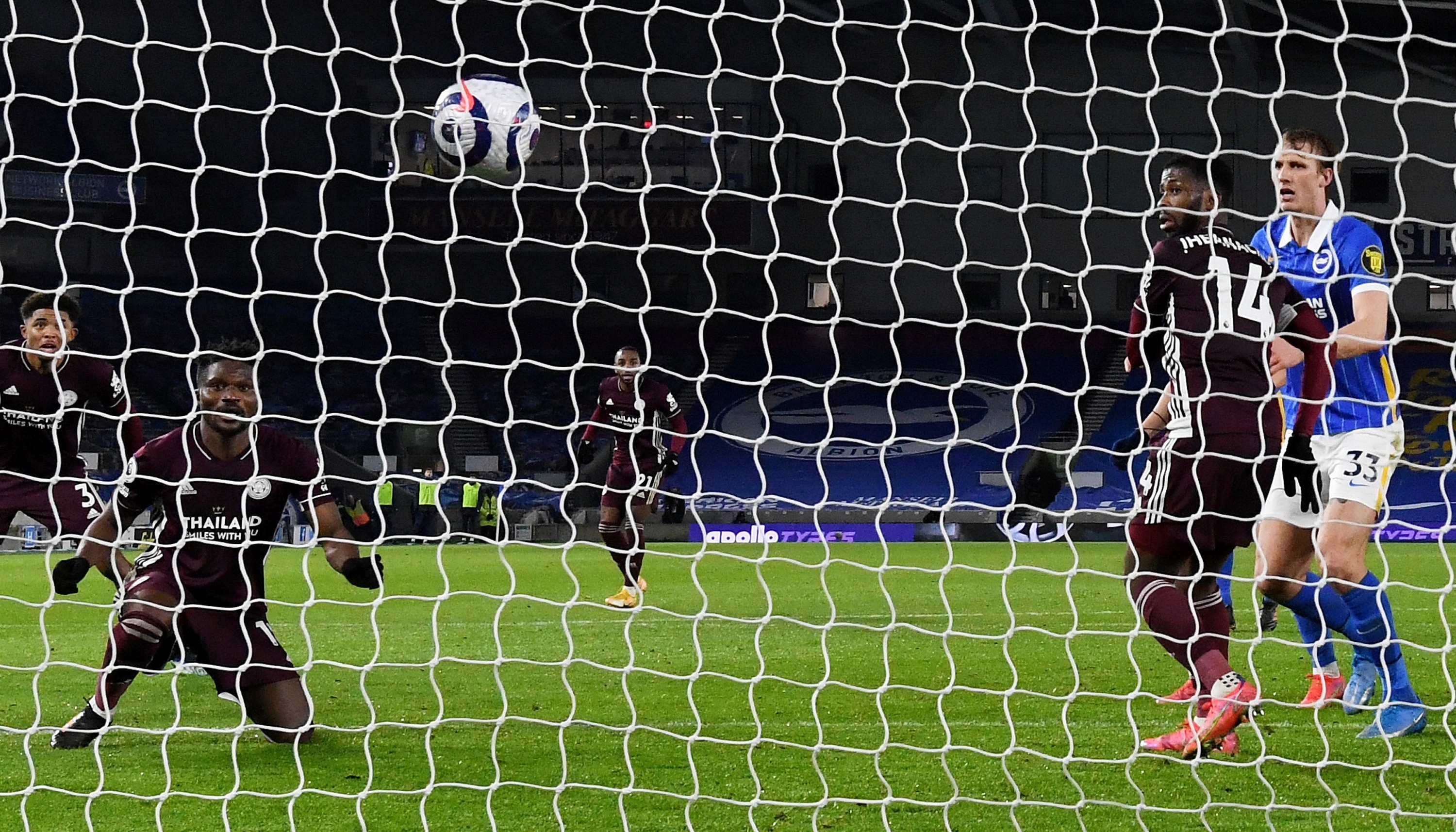 It chalked off Adam Lallana’s opener and swung the momentum back to Leicester, who nicked it at the death through Daniel Amartey’s header.

Amazingly, it was the back-up defender's first goal in 1540 days and only his second ever in the Premier League.

It was the second time in a matter of weeks Nigerian Iheanacho has proved a thorn in Brighton’s side, having notched a 90th-minute winner to dump Albion out of the FA Cup last month.

But this one could well have hurt more for Graham Potter’s side, who were desperately seeking a win to ease their relegation fears.

The same could be said for Brendan Rodgers’ top-four chasers, who had looked to be stuttering going into the home straight just as they did last year.

Last term, they collapsed completely when football restarted in June, taking just 12 points from their final 11 games and shattering their Champions League dream.

Rodgers would have been fearing history was going to repeat itself this term, after defeat to Arsenal and that draw at Burnley. 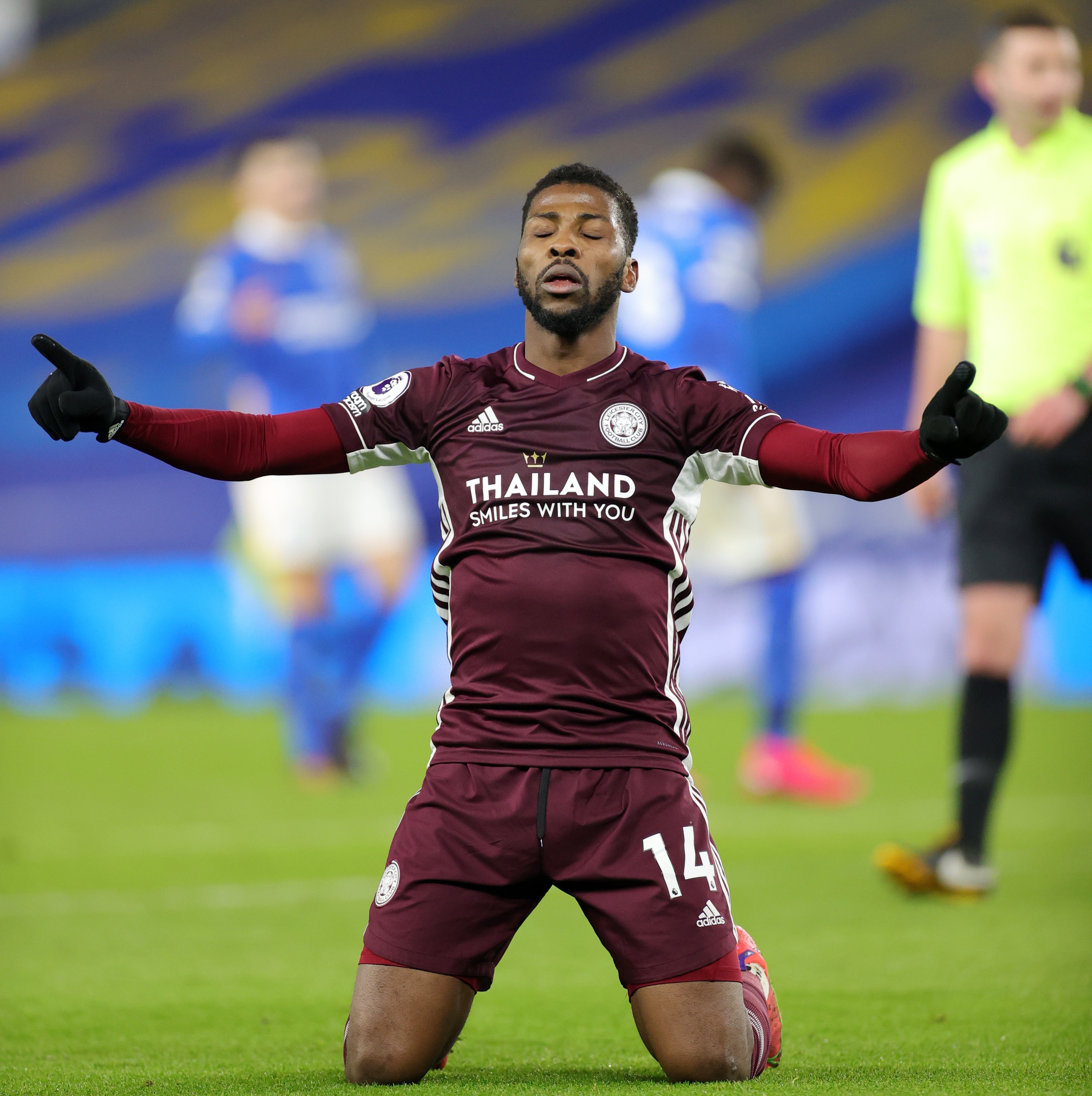 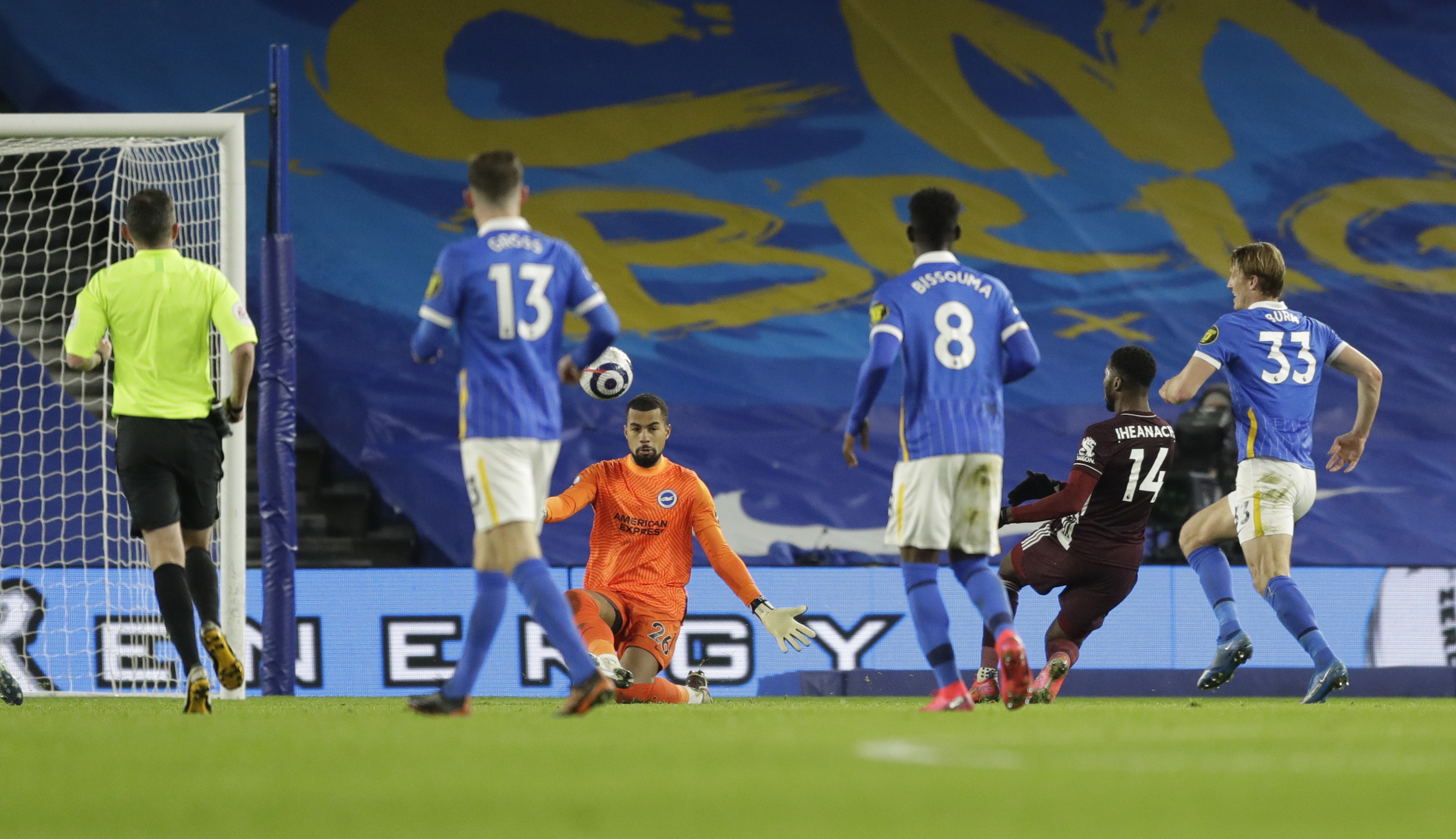 But even with injuries hitting them hard – and Vardy now on a run of just one goal in his last 14 games – they somehow found a way to win here.

And that will surely give Rodgers huge confidence that this year can be a different story.

Brighton would no doubt have loved their fans to be attending for such a crunch game to give them an extra edge.

Coronavirus obviously put paid to that.

But next year, when clubs are hoping to welcome supporters back, Albion will be hosting even more than they did before the pandemic with the Amex’s capacity being boosted in the summer to 32,500.

If Brighton’s confidence had been knocked by their last two results, they did not show it.

Potter’s side had somehow lost to Crystal Palace despite battering their rivals before last week’s farce at the Hawthorns where they missed two penalties and had a goal disallowed, awarded and finally chalked off again by an unsure Lee Mason.

It had left the Seagulls just three points above the relegation zone but they started strongly here.

Continuing with their easy-on-the-eye style, they almost forced an own goal when the returning Wesley Fofana slid a Pascal Gross cross narrowly wide of his own post. 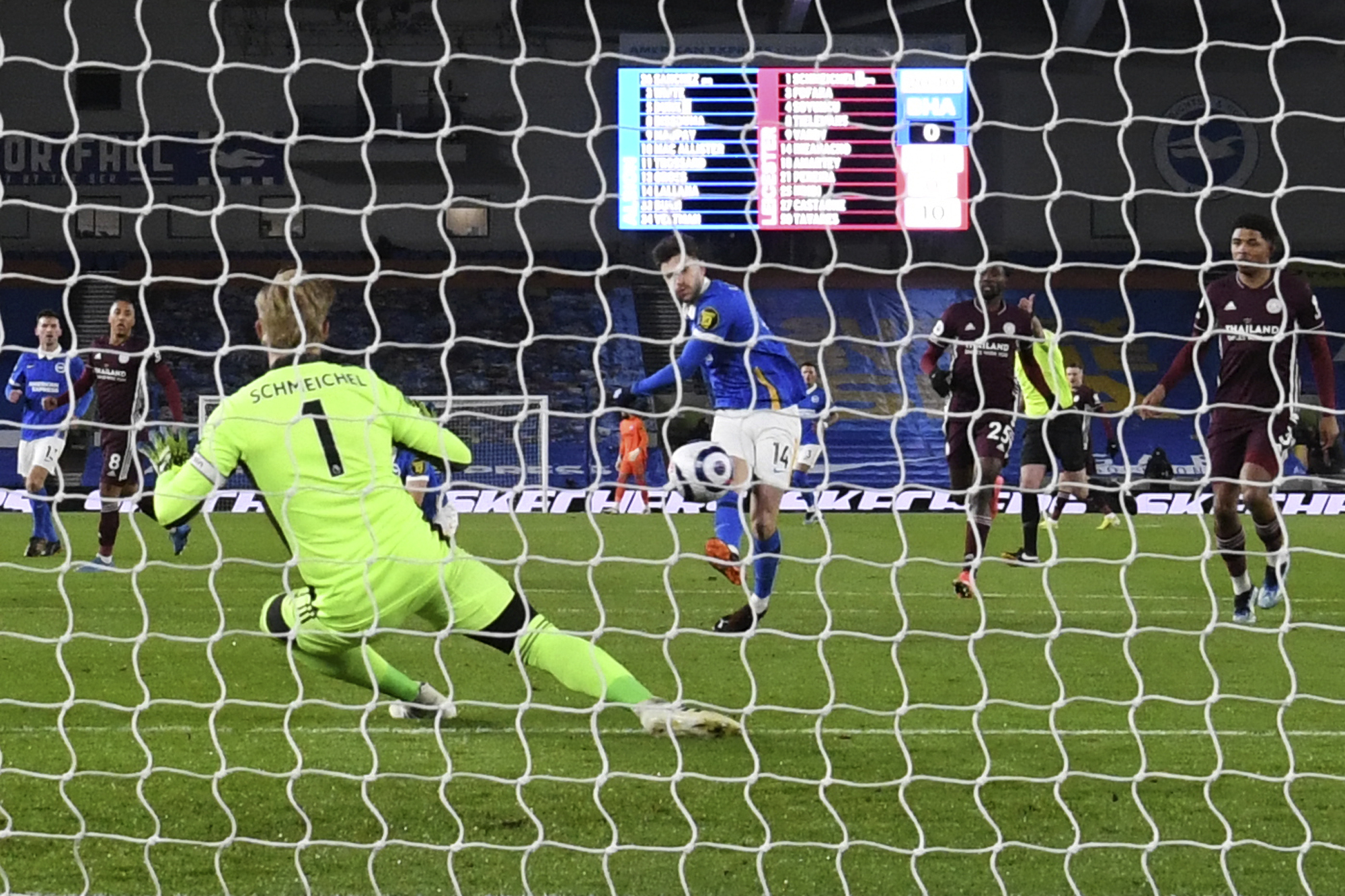 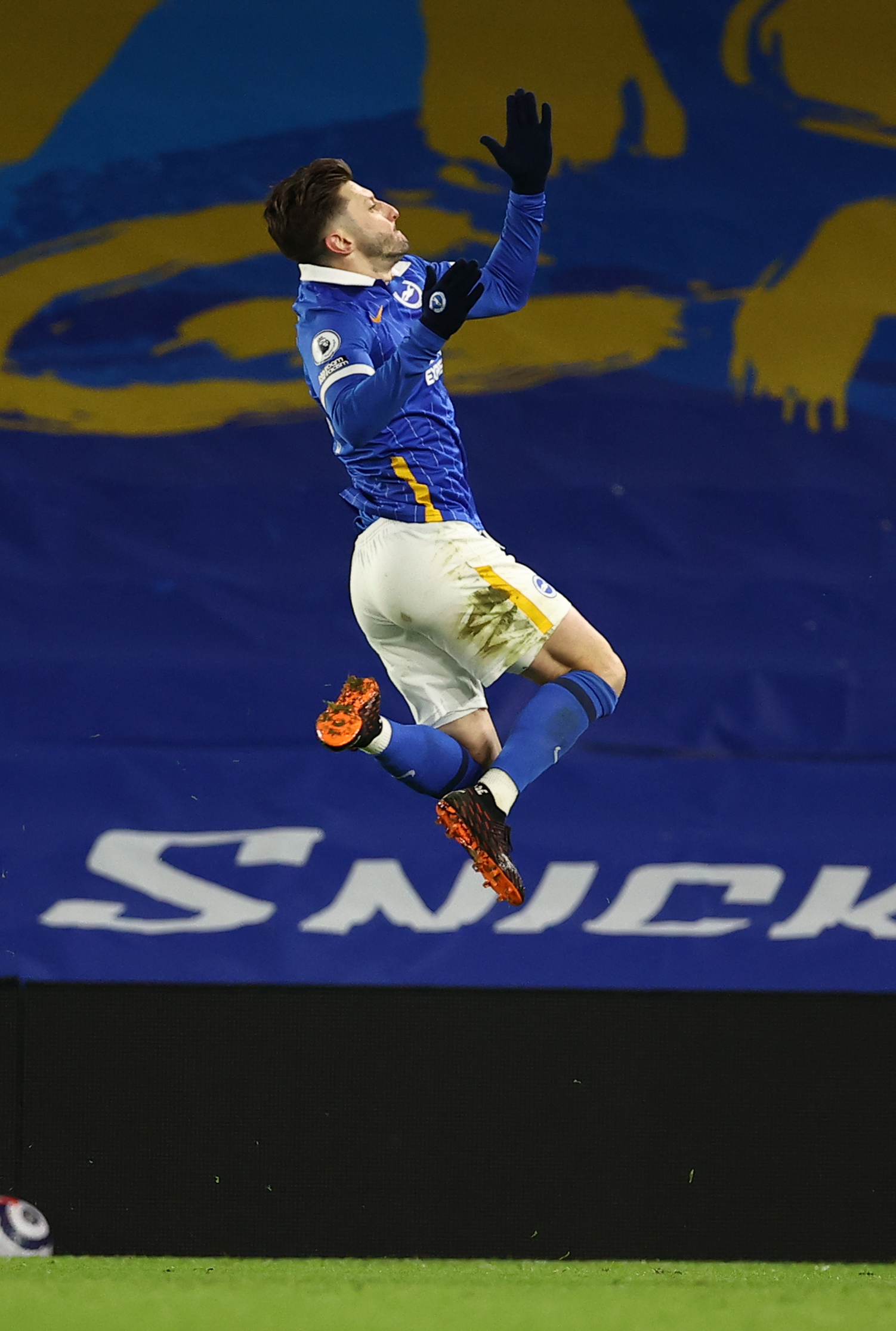 Captain Lewis Dunk, who had that goal ruled out by Mason at West Brom, then blazed over from inside the box.

Yet with Rodgers’ patched-up side looking timid, Albion continued to press Leicester’s backline and ten minutes in, it paid dividends.

Brighton won the ball back from a Foxes’ throw-in, allowing Neal Maupay to run across the box and slip in Lallana, who kept his cool to finish past Kasper Schmeichel.

It was his first goal for the club since joining on a free from Liverpool last summer and his first league strike since netting a late leveller at Old Trafford in October 2019.

In the empty Amex, Leicester’s frustration was audible.

Schmeichel and Vardy tried to gee up their lethargic team-mates with foul-mouthed cries of encouragement.

They almost had a leveller ten minutes before the break when Vardy chested down for full debutant Sidnei Tavares to blast towards the far corner from distance.

But the 19-year-old was denied by a wonder stop from a flying Robert Sanchez.

Leicester had more close shaves before the interval. 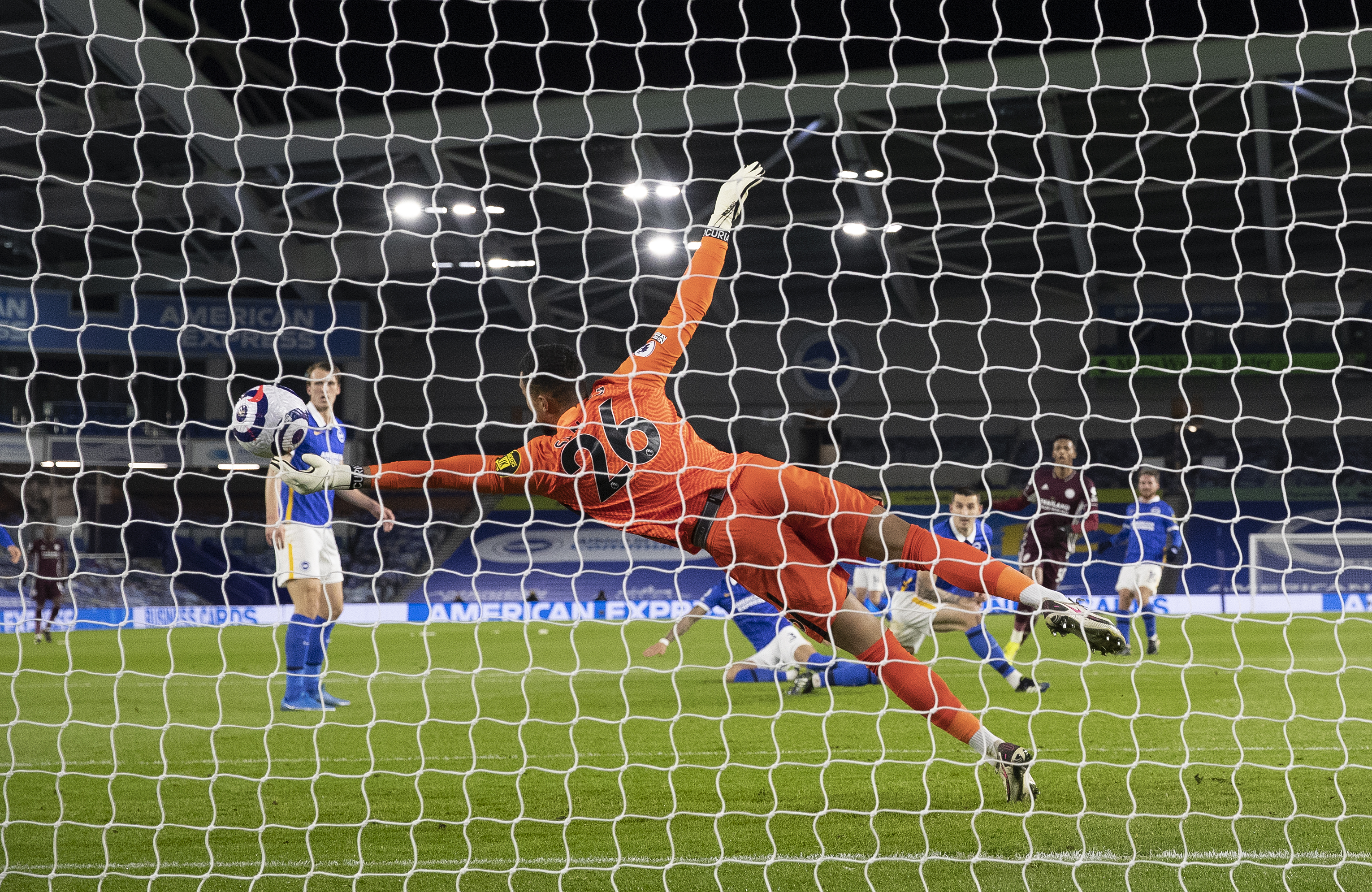 Schmeichel was heard screaming at his side to wake up when the excellent Lallana headed Gross’ free-kick against the post.

Former England man Lallana then rolled back the years to send through Maupay with a gorgeous, first-time pass which the Frenchman fired into the net – only to be called offside.

Leicester were more urgent after the break and Iheanacho, in confident mood from his recent form, crashed the ball into the side netting from an acute angle.

It was a let-off for the hosts but ten minutes later, the Nigerian did find the target to level things up.

Played through by an inch-perfect Youri Tielemans’ pass, Iheanacho confidently lifted the ball high past Sanchez and into the net.

From there it could have gone either way and with Lallana putting in a performance of his injury-free heyday, Brighton knew they still had a chance.

The 32-year-old came close to his second with 11 minutes to go but his low shot was impressively tipped away by Schmeichel.

Yet just as both sides were looking to settle for a point that neither really wanted, Leicester nicked all three.

It came via a gaffe from Sanchez, who missed a punch from Marc Albrighton’s corner and allowed Amartey to nod in at the far post.

The Ghanaian would be nowhere near the starting XI if all Rodgers’ men were fit.

Yet without the likes of James Maddison, Jonny Evans, James Justin and Harvey Barnes, Leicester found a new hero to take them up to second. 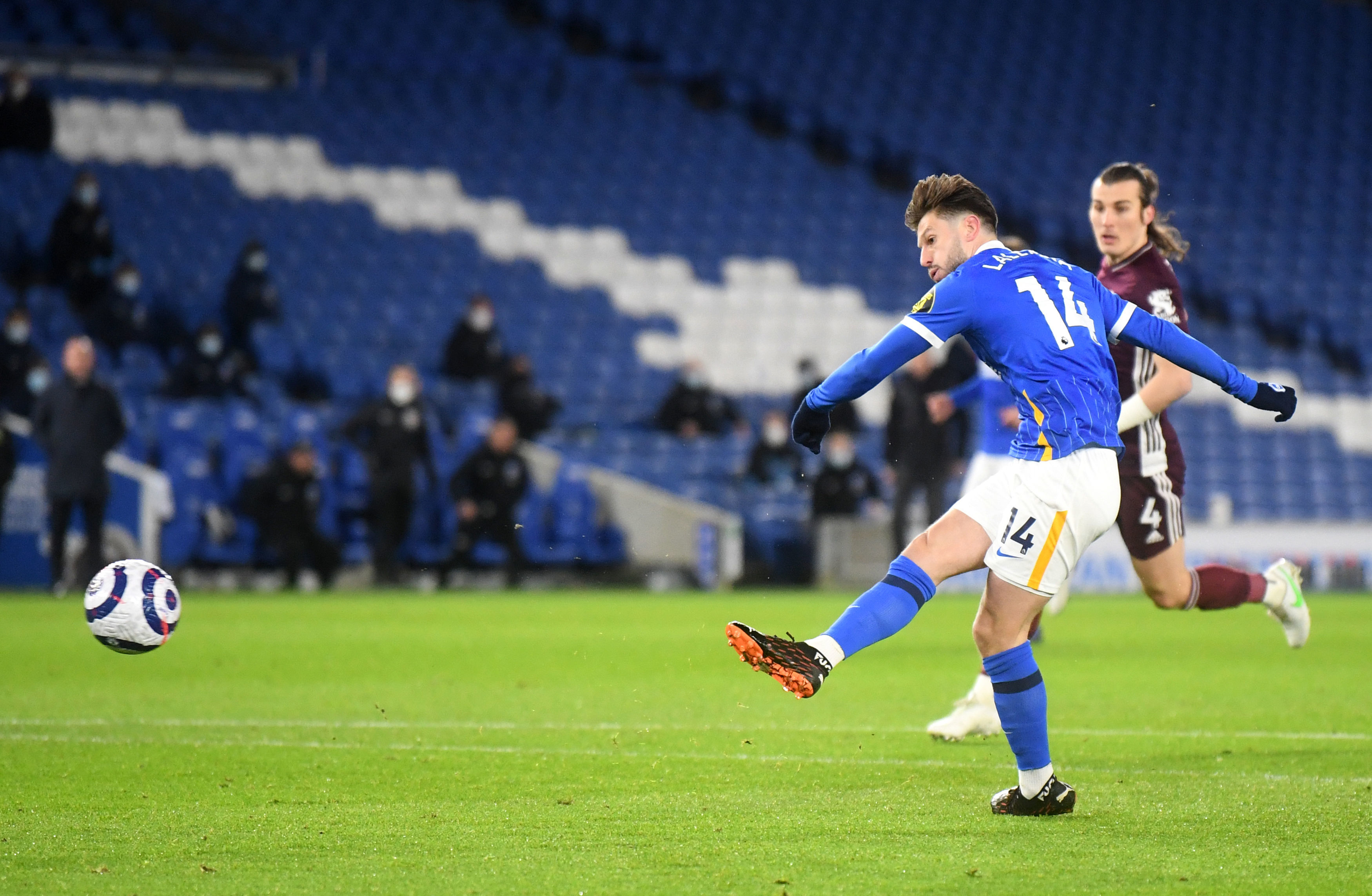