AUGUSTA, Ga. — The methodical, ever calculating Bryson DeChambeau, who last week put himself through a 14-hour practice session to decipher the effect of what he called the “spin loft curve” of his wedges, was asked late Thursday to assess the final nine holes of his first round at the 2019 Masters.

DeChambeau, who birdied six of those nine holes, including the last four, responded with neither a technical term nor a scientific one.

On a favorable weather day that produced 28 rounds under par, DeChambeau was one the last competitors on the Augusta National Golf Club grounds, and he played as if enchanted by a spell.

His last full shot to the 18th hole seemed destined to roll into the hole for an eagle until the flagstick deflected it away. DeChambeau instead tapped in from about 2 inches for a final, stress-free birdie, which gave him a six-under-par 66 and tied him for the lead with Brooks Koepka.

It was just the ninth competitive Masters round for DeChambeau, 25, and the first time he had recorded a score in the 60s. In the past, DeChambeau freely conceded that he felt uncertain in the sanctified setting of golf’s most tradition-laden event.

But on Thursday, DeChambeau showed a newfound maturity.

“It was understanding how to control certain emotions on the golf course,” he said. “Just from a nerve perspective, being comfortable in different situations and being able to say, ‘I can do this, this is not a problem.’”

DeChambeau was far from the only top golfer firing away at greens softened by rain earlier in the week.

Koepka also surged late in his round to remind the field, should anyone forget, that he had won three of the last seven major championships, two of them with record scores.

Asked about that, Koepka, 28, said evenly: “I enjoy the big stage. That’s what you’re remembered for.”

One stroke off the lead was Phil Mickelson, who had two bogeys and five birdies on the back nine.

The 48-year-old Mickelson seemed rejuvenated by his round of 67, which matched his score from the final round of last year’s tournament, when he finished in a tie for 36th. 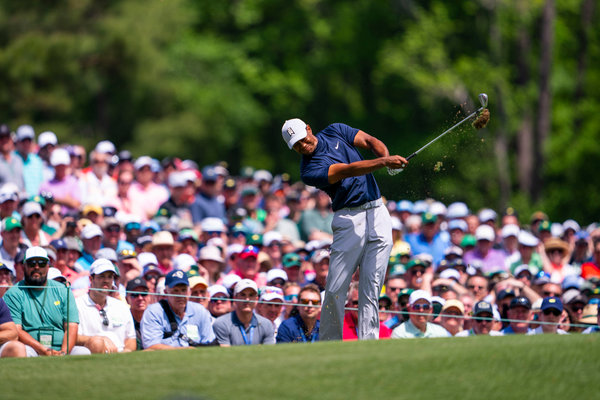 “But this was a lot of fun,” a smiling Michelson said Thursday. “It was great.”

Dustin Johnson, the world’s second-ranked golfer, and Ian Poulter were two strokes behind the leaders.

For most of the early part of the round, the focus was on Tiger Woods, who was tied for the lead with only a few holes left in his first round.

Woods’s surge had the Augusta National galleries in full throat, especially after he made an improbable birdie from the thick trees left of the 14th hole to keep his name atop a leaderboard stocked with many of the world’s top golfers.

He could not, however, maintain all of the momentum he had built. After Woods missed the green with his approach shot at the par-4 17th hole, his par putt hung on the edge of the cup for a bogey that brought a groan from the crowd circling the green.

Still, Woods finished with his usual flair. After his tee shot at the final hole trickled into a bunker, Woods lofted an iron shot that ascended the intimidating, steep uphill 18th hole and dropped pin high for an easy par.

Although Woods, after his round, was under the impression he had shot 70 in the first round of each of this Masters victories.

“I’ve shot this number and won four coats, so hopefully I can do it again,” he said, referring to the green jacket awarded Masters winners.

Irrespective of that bit of misremembering, Woods was buoyed by his round. Minutes after it concluded, he had moved past the disappointment of the bogey on the penultimate hole.

“I feel very good,” he said. “I played well and I controlled my golf ball all day. I did all the things I needed to do today to post a good number. I drove it well, hit some good iron shots, speed was good on the greens.

“I was in a position to make a couple of birdies on the front nine and missed those, but I felt confident all day. Those putts were close. Over all, I was pleased.”

At the 14th hole, after yanking his tee shot into the woods left of the fairway, he skied a short iron over the trees that settled on the green about 20 feet from the hole.

Because it was a tricky, double-breaking putt, Woods struck his next shot cautiously. In fact, he was not even trying to sink the putt.

“I was just trying to lag it down there,” Woods said. “It’s uphill and then really quick downhill, and I had a little ridge right in the line, too.”

The putt dropped into the hole, and patrons surrounding the green roared. All around Augusta National, Woods’s name vaulted up the hand-operated scoreboards, sending a buzz through the grounds.

Afterward, Woods smiled easily and seemed to enjoy the attention. But in his 22nd Masters, Woods knew how much more golf was left to play.

“We still have a long way to go,” he said. “I tee off late tomorrow, and the wind’s supposed to be up, so I have my work cut out for me the rest of the week. But so does everyone else.”

Several golfers who teed off Thursday morning, like Woods, had strong rounds, including Jon Rahm, who finished with a three-under 69. Also at three under were the former Masters champion Adam Scott and the South African Justin Harding, who was playing in his first Masters.

Harding appeared a bit awed by his first-round result.

Walking only is a rule at Augusta National, for spectators and players.

Rickie Fowler, last year’s Masters runner-up, was tied with Woods, as were eight others, including Jason Day, Gary Woodland, J. B. Holmes and Corey Conners, the winner of last weekend’s Texas Open.

The defending champion, Patrick Reed, shot 73, as did the 2017 winner, Sergio García.