The ACT Brumbies are bracing to be without David Pocock for two weeks in a row and are hopeful Rugby Australia will classify his absence as fulfilling his World Cup resting requirements this year.

Pocock was forced to leave the field after just five minutes when he collided with Dane Haylett-Petty's elbow in the Brumbies’ loss to the Melbourne Rebels on Friday night. 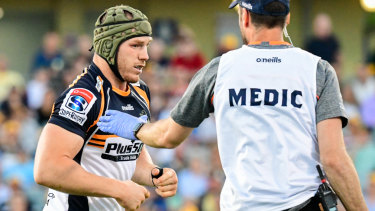 David Pocock had to be helped from the field and didn’t return on Friday night.Credit:Stuart Walmsley/rugby.com.au

His absence was telling in the contest and made more significant by a Rugby Australia workload management policy this year, which will see key Wallabies stood down from Super Rugby matches.

Pocock is one player the Wallabies are monitoring closely to ensure he is in peak condition for the World Cup in Japan. It was expected he would miss at least two Brumbies' matches during the regular season.

But the Brumbies hope Rugby Australia will view his round one five-minute cameo has a rest match and missing the Waikato Chiefs' clash in round two as another rest.

Brumbies coach Dan McKellar said he is reluctant to rush Pocock back given he also suffered a head knock on the spring tour of Europe and has been troubled by neck problems.

His potential absence from the clash against the Chiefs means Tom Cusack will return to the game-day squad and battle with Pete Samu for the No. 7 jersey.

"He failed his [head injury assessment] so there's a concussion there," McKellar said.

"He's obviously had a concussion on the spring tour as well, so we'll manage him and do what's in the best interests of Dave."

The Brumbies are already short on back-rowers after Ben Hyne had his second knee reconstruction during the pre-season. The club has signed former Waikato player Jahrome Brown on a temporary contract.

Samu and Lachlan McCaffrey stood tall without Pocock on the field helping in the back row. Samu was outstanding in his debut for the Brumbies and McCaffrey cemented his place as a leader.

The Brumbies are also sweating on injury news from Toni Pulu (cheek) and Henry Speight (hip) after both wingers had to leave the field.

Pulu went straight to The Canberra Hospital during the game and was expected to have surgery on Saturday. The former Chiefs flyer will miss the clash against his old team and a large chunk of the season.

Speight's injury is less serious, but he is an unlikely starter against the Chiefs. It opens the door for Lausii Taliauli, Andy Muirhead and Chance Peni to compete for selection.

The Brumbies looked dangerous for the first half of their clash against the Rebels, but injuries took a toll and they couldn't withstand the storm in the second half.

The Brumbies did score four tries and secured a losing bonus point. It was a far from ideal way to start the season, but there were signs of hope for the year ahead.

The challenge against the Chiefs will be massive given the Brumbies have beaten just one New Zealand team in almost three years.

"There were a lot of good things, but defensively we leaked a couple of soft tries and gifted them one or two," McKellar said.

"Some of our decisions at key moments … we want the boys to use their skill and back themselves but we also have to understand there are moments to maintain possession and keep the pressure on rather than throwing that 50-50 pass.

"There were some really good signs of our attack in patches, it was just that last pass probably hurt us three times when points were on offer."