The Brisbane Bullets have dropped out of the NBL's top four with a 13-point loss to Perth Wildcats at RAC Arena on Sunday afternoon.

They need everything to go their way in the final round if they are to kick the New Zealand Breakers out and secure a play-offs spot. 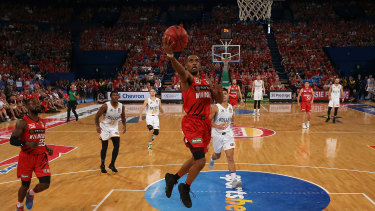 Bryce Cotton of the Wildcats lays up during the round 19 NBL match between the Perth Wildcats and the Brisbane Bullets.Credit:Getty/Paul Kane

Conversely, the Wildcats took a big step towards cementing an all-important top-two position with the 85-72 win.

The reigning NBL champions were pushed for the first three quarters by the desperate Bullets but took control in the final term – restricting Brisbane to their lowest score of the season.

Perth coach Trevor Gleeson took the opportunity to point out his team's defensive effort, days after none of his players where nominated for the league's Best Defensive Player Award.

"It was just playing defence. Apparently we don't have any defensive players to get nominated, so we have to rely on our team defence," he said.

"I thought we did a really good job to hold a Brisbane team, for three quarters, to hold them under 20 points."

The win can be chalked up to Nick Kay though. When Perth struggled early, shooting at just 33 per cent in the first half, they held a 41-39 lead on the back of Kay's performance.

He was on track for a triple-double at the main break with 10 points, five rebounds and five assists and finished with 23 points and eight rebounds while Bryce Cotton contributed 25 points. 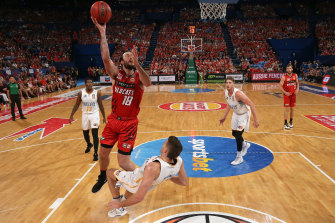 Miles Plumlee of the Wildcats puts a shot up.Credit:Getty/Paul Kane

Lamar Patterson led the attack for the Bullets. His 25 points and 11 rebounds came after he had a slow start.

With Miles Plumlee playing only 18 minutes for Perth, Brisbane's Matt Hodgson and Will Magnay helped Patterson to give the Bullets an early advantage on the boards.

But when Hodgson fouled out of the game with five minutes remaining, the challenge from the Bullets seemed to fade.

"We did lots of good things to give ourselves an opportunity for success," Bullets coach Andrej Lemanis said.

"There are some key things that didn't go our way. When you look at the statistics, we shot the three at 20 per cent. But you'd think a lot of those were good looks that you would expect us to take and make."

Importantly, Perth skipper Damian Martin returned to action for his first game since he injured his foot playing against Sydney in the week before Christmas.

He hadn't been on the training court for long, so was managed and played only 12 minutes.

Perth will host the Adelaide 36ers in the final round. A win could see them pinch top spot and a massive advantage in the finals, but only if the bottom placed Illawarra Hawks can knock off the Sydney Kings.