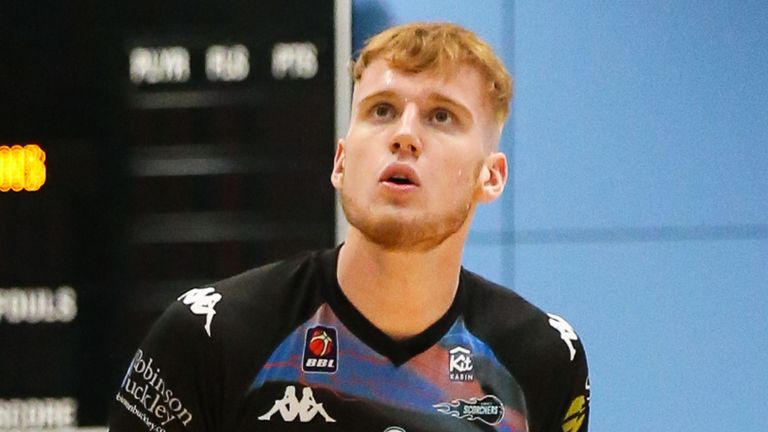 Cam Hildreth is unable to recall his first experience of squeaky sneakers or the roar generated by a vicious poster. Not in any great detail, anyway. It came when he was just three days old as he watched his dad Daniel take to the floor.

‘Watch’ is perhaps overly-ambitious for a three-day-old. More like ‘slept through’. Nevertheless, it defined the notion of growing up surrounded by basketball.

Cam’s father played professionally as a point guard for the Worthing Thunder and Brighton Bears, among others, across a 15-year career in British basketball that notably included time working with now-Toronto Raptors head coach Nick Nurse. While Daniel still coaches, the focus these days is very much on the small spectator that used to accompany him at games.

“That’s when I first met my grandparents, they were all at the game watching,” Hildreth told Sky Sports. “Obviously I have no memory of it because it was so long ago but I’ve been told and seen photos that that was my first game.

“It has just been around me my whole life through family generations so it’s something I’ve built a love for over time.” 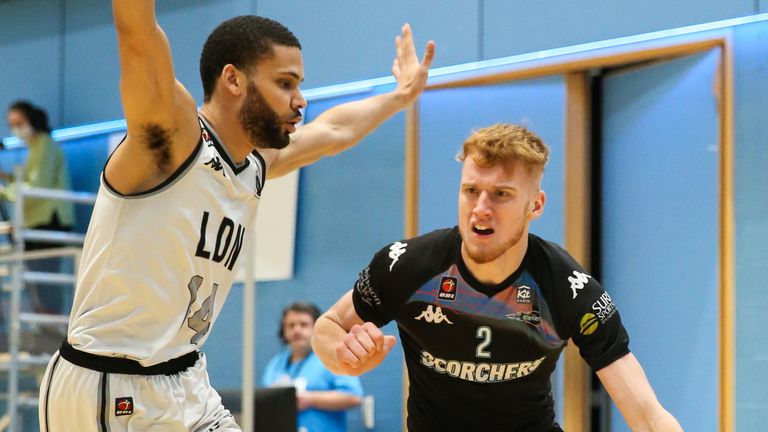 Behind Hildreth dangles an impressive hoard of medals from a display rack cut to the shape of basketball players, while a few inches to the left there is a silhouette wall sticker depicting a player leaping for a one-handed flush. Basketball is ingrained in him, and has been since that first outing.

In an hour’s time, he has another interview, having only just returned home from daily training, during which he admits to feeling some discomfort in his back. Surrey Scorchers head coach Creon Raftopoulos need have no fear though, Hildreth offering reassurances that he’ll “be fine for the weekend”.

There’s a distinct serenity and a grounded demeanor to a teenager swiftly garnering a reputation and demanding attention as one of British basketball’s most talented prospects.

“It kind of all came quite quickly, to be fair,” he added. “Since the Adidas Next Generation tournament, my name kind of got out there to a few people and there was a lot of hype that I tried to stay level-headed with.

“Until I get there, that’s when I can say I’ve achieved what I want to achieve. But right now, I can’t just take everything easy. I’ve still got to work hard and work everything.” Hildreth is averaging 9.3 points, four defensive rebounds, and 2.7 assists per game through six BBL Championship outings since joining Surrey at the beginning of February.

The 18-year-old’s arrival came on the back of two seasons with Worthing in NBL Division One, in which he averaged 20 points, six rebounds, and three assists during the 2019-20 campaign.

“I started off in junior leagues and I’ve always played up so I’ve always been the younger one on the team,” he said. “I’ve always done that to push myself. I don’t want to ever be in a comfort zone, because when I get to a comfort zone I know I can sometimes chill for a bit and that’s the last thing I want to do. I always need to be pushing myself.

“The opportunity at Thunder was there for me and I think that year was great, playing with Alex Owumi who was a previous BBL player, Zaire Taylor, who again was previous BBL… the guys around there were just great mentors for me.”

Tonight’s @robinsonbuckley Play of The Game is an end of quarter buzzer beater from who else…@camhil06 ?#OneGoal ? pic.twitter.com/8csOpEmFov

His ascent continued in September 2020 when he committed to NCAA Division One programme and four-time ACC champions Wake Forest for 2021-22.

“Obviously the main priority right now is winning games at Surrey, but don’t get me wrong, Wake Forest is always there,” says a smiling Hildreth, as he pulls out a Wake Forest cushion serving as a constant reminder of the chapter ahead. “I can’t wait to get there for sure.”

While offers came in from elsewhere, North Carolina soon emerged as a natural home away from home. One arguably indicative of the BBL’s value.

“The way Wake got in touch with me was slightly through the ANG tournament in Lithuania, that’s where they saw some of my highlights,” said Hildreth.

“But believe it or not, Nick Nurse actually got in contact with Wake coach Steve Forbes, primarily because my dad and uncle are good friends with Nick due to him coaching them back in the day in the BBL. He’s best friends with the head coach at Wake Forest, that’s how they got in contact.” They’ve watched my highlights and then they were impressed and from there, that’s how it kind of went. I fell in love with Wake Forest – the staff is amazing, coaching staff, education staff, facilities, everything about them is unbelievable. I was like ‘this is the one for me’.

From the nutrition to the private school, ‘tick, tick, tick’ is the way Hildreth goes on to describe it, before his face lights up at the reminder of 11-time NBA All-Star Chris Paul and five-time NBA champion Tim Duncan being among the Wake alumni.

Life with Surrey, particularly in COVID times, has provided a valuable insight into the student-athlete balance Hildreth will be faced with upon landing Stateside. Competing means performing well in the classroom.

“Especially on these long trips we have, I’m trying to get my laptop out and do some work, as hard as it is,” he said. “Managing your time with basketball and education is important because obviously, you need the education in order to play.”

Despite initial scepticism upon entering the BBL, the young guard who styles his game on that of Kyrie Irving has been unfazed and perhaps even a little surprised by his own impact.

The production was immediate, Hildreth marking his debut with 22 points and a buzzer-beating winner against the Thames Valley Cavaliers in the BBL Trophy, before registering 17 points against the Manchester Giants and a 10-point, 10-rebound double-double against the Bristol Flyers in the BBL Championship.

Within that, shot-selection has been a significant component to his development as he transitions into more of a back-seat role than he has been accustomed to throughout the youth age groups.

“It’s been difficult at the beginning to understand the role, just trying to fit in,” he said. “In Division One, I’m like the main guy doing most of the ball-handling and shot-taking, and then taking a step up into the BBL I’m not the main guy, but I’m still involved. Getting that shot-selection balance right is important for me.”

Hildreth credits Raftopoulos for his early guidance, along with that of his experienced teammates – including 11-year veteran and former NBA Draft pick Ryan Richards.

“Ryan gets onto me a lot which at the beginning I was like ‘damn, this guy won’t leave me alone’ but when I think about it, he’s helping me, he’s getting onto me for the right reasons so it’s nice to be around him,” he continued.

The price of being the rookie. 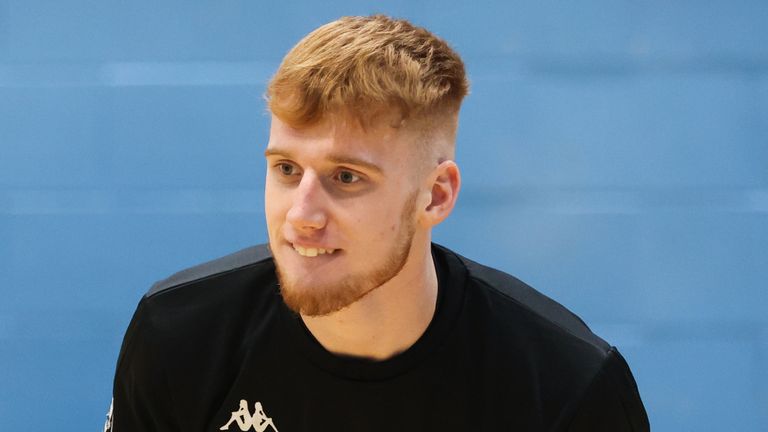 Such has been Hildreth’s lasting impression over the past 12 months that he was called up to the GB Men’s squad for November’s Eurobasket qualifiers. He didn’t play, but the trip alone provided welcome takeaways.

A Luke Nelson buzzer-beater in GB’s 83-81 win over Germany recently secured qualification for next year’s Finals, giving Hildreth yet another target in sight.

Team GB or not, Hildreth will be representing his nation proudly next season when he makes his way stateside to begin his Demon Deacons career.

“It’s going to be really interesting living a totally different lifestyle,” he said. “I know it’s slightly to do with basketball but the way they travel to teams in private jets, and that whole lifestyle, is something that I’ve never obviously experienced and it’s a once-in-a-lifetime experience.

“I think the whole going out there, having that lifestyle, seeing new people, being in a totally different country and learning different things, is going to be really interesting.”

It marks a major stride towards the ultimate goal, whether it be in the NBA or exploring a talent and opportunity-filled European market.

“My map has always been to make basketball my job, wherever that leads me,” said Hildreth. “I haven’t got a specific map, but my map is that wherever it ends, it’s my profession.

“My dream and goals were to get to college in America. My dream and goal next is to still get into the NBA, but at the same time, who knows what’s going to happen? Wherever basketball leads me, I would like that to be the end. I want it to be my job.”

Watch Hildreth and the Surrey Scorchers take on the Worcester Wolves live on Sky Sports Mix and Arena from 7pm on Friday.