It is one of the great unknowns in tennis, but Roger Federer is finally back to help change that.

This week — after more than a year away from the game — Federer will play his first competitive match since injuring his right knee and undergoing two operations in 2020.

But will he ever again be the Roger Federer who defined his sport for so many years and won 20 Grand Slam singles titles, eight of them at Wimbledon? Will he still be the ethereal shotmaker, the merciless assassin disguised as the ultimate tennis gentleman, the master of playing tennis without seeming to break a sweat?

Because of his history, no one has dared to answer those questions in the negative, not since he made it clear he would play competitively again in 2021.

Federer, 39, will take the court this week in Doha at the Qatar Open and begin a phase of his career that he has never truly experienced: where every surprising loss — and there will be surprising losses — will generate questions about whether he should just call it a career.

Federer asked for patience at a news conference on Sunday. He is still building, trying to become stronger, better, fitter, faster, with the goal of being at 100 percent by Wimbledon, which is set to begin on June 28.

“Everything until then, it’s like let’s see how it goes,” he told dozens of journalists during one of those virtual news conferences that the world has become used to in the past year while he has been nursing his injuries. “Everything starts with the grass.”

The tennis world may not share his patience. His every move will be picked apart for hints of whether he can make this comeback something other than a valedictory. In a sense, Federer is a victim of his success. In 2016, a torn meniscus in his left knee and a tweaked back sidelined him for six months. When he returned, at 35, in 2017, there was chatter he had passed his sell-by date.

But the Federer who showed up after that layoff had new power and aggression, especially on his backhand, long a weakness that his rival Rafael Nadal took advantage of with his left-handed crosscourt forehands. Federer pushed closer to the baseline during points, pressuring opponents and attacking the net when he saw opportunities to end points quickly.

He won the 2017 Australian Open in the first month of his comeback, finishing it by coming back from 3-1 down to Nadal in the fifth set to win, 6-3, in a remarkable display of grit and shotmaking under pressure. Then, in July 2017, he captured his eighth Wimbledon title without losing a set.

“I’ve always been a guy who can play very little and play very well,” Federer said.

After that comeback, the Federer legend grew even larger, especially among his staunchest competitors.

“Roger makes you feel like you’re really bad at tennis,” Nick Kyrgios, an Australian, said of Federer last month at the Australian Open. “He walks around, he flicks his head, and I’m like, I don’t even know what I’m doing out here.”

But will he be able to do that once more?

Paul Annacone, who coached Federer to a Wimbledon title a decade ago as the player struggled to keep up with Nadal and a rising Novak Djokovic, said he had no doubt that Federer would again have great moments, even stretches of brilliance. The question is, will he be able to sustain them? Will he be able to maintain a high level of play through five matches of a regular tour event or seven matches at a Grand Slam tournament? 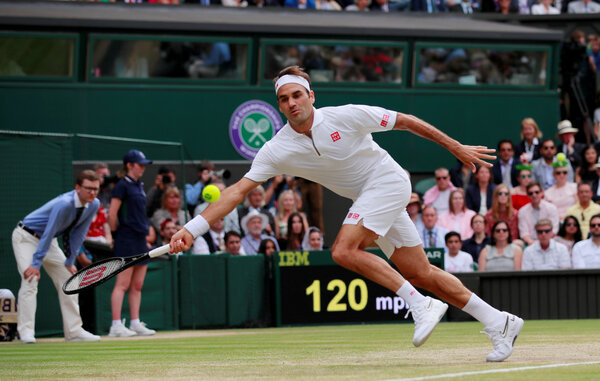 All pro tennis players can reach a sublime level for stretches, but over the course of a match or a tournament, players are generally only as good as their average level of play. So how good will Federer’s average be?

“Historically, it’s been the older you are, the more challenging it is to get back what you have given up, in terms of time,” Annacone said in an interview last week. “But with the great players, you make predictions at your peril.”

Annacone has a unique window into Federer’s moment. He also coached Pete Sampras in his twilight in the early 2000s, when Sampras’s ranking was sinking and every loss brought a new round of questions about retiring. Sampras won the 2002 U.S. Open, his 14th Grand Slam title but first in two years, and never played another match.

The journey to that title, with those constant questions, was at times a brutal experience, one that Annacone said could sow doubt in the mind of even a great player like Federer.

Andy Murray, a three-time Grand Slam event winner and former world No. 1, is going through it now as he tries to recapture his form after hip resurfacing. Murray, ranked No. 123, voiced his frustration last week after a top-tier win at the tournament in Rotterdam, the Netherlands.

“I feel like I’m playing for my career now each time I step on the court, which is a motivation in some ways,” Murray said at a news conference after he beat Robin Haase of the Netherlands in three sets. “But it also adds a bit of extra stress.”

How Federer manages that stress will go a long way toward determining whether this comeback is a farewell tour or a viable attempt to compete for the biggest championships, especially Wimbledon, where Federer has been at his best because he is so good on grass. He will play in Doha this week, and then perhaps in Dubai, but he has not committed to the spring clay-court season, which concludes with the French Open.

Early on, it’s a good bet that he is going to make plenty of uncharacteristic errors. He will shank the occasional forehand, rim some backhands and struggle to nail his targets on his serve or when he fires at a sideline.

“Expectations are really low, but I hope I can surprise myself,” Federer said.

For him, this comeback was more about regaining his health than winning titles. Of course, he had conversations during the past year about whether embarking on this battle to recapture his old self at 39 was a fool’s errand. But, as he saw it, he needed a healthy knee anyway, so he could ski with his four children, cycle in the Alps and play basketball with his friends.

And if he could do those things, then why not try to use that healthy knee to battle again on the tennis court against the best players at the biggest events.

“The knee is going to dictate how long I can keep doing this,” he said. “I know it is more on the rare side for an almost-40-year-old to come back.”

Like everyone else, he said, he is going to see what comes of the next five or six months. Then, in the fall, if he has played a significant number of matches, he will re-evaluate what comes next. For now, though, he is healthy and eager to take the court. He knows the initial results will not be his best, he said, but when he rises each morning he is full of hope.