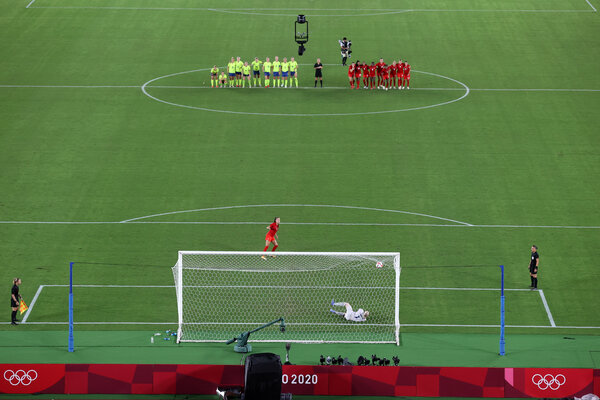 Canada, a relentless team with an aging star, a sturdy defense and a talented young core, won its first gold medal in women’s soccer on Friday by defeating Sweden in a penalty shootout, 3-2, after a 1-1 tie in Yokohama.

Julia Grosso clinched Canada’s victory by converting her team’s sixth attempt in a shootout that featured more misses (seven) than makes (five). When her shot went in off Sweden goalkeeper Hedvig Lindahl, her teammates raced forward off the midfield line where they had been watching and buried her in a pile of red at the top of the penalty area.

FOR THE FIRST TIME – CANADA HAS WON GOLD IN WOMEN'S SOCCER! ?#TokyoOlympics pic.twitter.com/nj0TwLt8Z9

Sweden’s players, who had taken an early lead on a goal by Stina Blackstenius in the 34th minute and created far more chances to score in regulation and extra time, collapsed to the turf, some of them in tears. Sweden lost in the final for the second straight Olympics.

Canada had been the bronze medalist in the past two Olympic tournaments, but advanced to the final for the first time by beating its neighbor and nemesis, the United States, in the semifinals on Monday.

Trailing at halftime, Canada had tied the scored in the 67th minute on a penalty kick by midfielder Jessie Fleming, awarded after a video review confirmed that Sweden defender Amanda Ilestedt had fouled Christine Sinclair, Canada’s 38-year-old striker and captain.

Sweden pressed hard for the winner before the final whistle and again in extra time, and it even had a chance to win the gold in the shootout, but Caroline Seger shot over the crossbar on her team’s fifth attempt.

That opened the door for Canada, and after Deanne Rose scored and Stephanie Labbe made a save, Grosso strode to the spot and scored the winner.

Canada’s victory over Sweden delivered the first major international championship for Sinclair, one of her country’s most decorated and celebrated athletes. But the Olympic title also means that Quinn, who started the final, became the first openly transgender and nonbinary athlete to win an Olympic medal.

In the men’s competition, Mexico beat host Japan, 3-1, to win the bronze medal. Brazil and Spain will meet in the men’s gold medal match on Saturday.