It's a time trial in more ways than one, with Rebecca Wiasak's performance in the Australian titles potentially determining whether the two-time world champion realises her Olympic dream.

The 34-year-old is one of three Canberrans riding in the national individual time trial championships at Ballarat on Tuesday, along with Gracie Elvin and Nathan Haas. 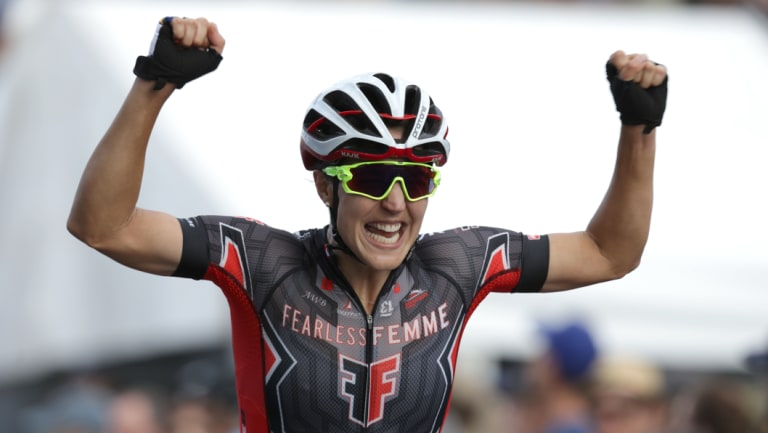 Wiasak was part of Cycling Australia's track program, winning the world crown in the individual pursuit but she was unable to break into Australia's team pursuit side.

Of the two track pursuits, only the team one is an event at the Olympic Games and Cycling Australia decided against renewing her contract for 2019.

But far from letting that shatter her dream, Wiasak has returned to the road, where she has won back-to-back Australian criterium crowns.

The retirement of Commonwealth Games gold medallist Katrin Garfoot last year has opened a spot for someone at Tokyo in 2020.

"I'm putting my hand up to try and get picked for worlds at the end of this year and then they're still looking to fill the spot for Tokyo," she said.

"So I'm hoping it will give me a good benchmarking idea of where I'm at compared to the best of Australia, how much work I'd have to do and then if that's something I can focus on for the next two years and try and put my hat in the ring for a potential Tokyo spot.

"It's pretty ambitious, but … who knows. I hope it comes together tomorrow."

Wiasak felt she might be a little underdone for the time trial, having only decided on the switch two months ago.

But in an open field, fellow Canberran Gracie Elvin said Wiasak was a definite podium chance with a win not out of the question.

Wiasak finished seventh in last year's time trial and fourth the year before.

Elvin said her Mitchelton-Scott teammate Lisa Kennedy, who finished second in 2018, was one of the favourites, along with Grace Brown.

"She's typically quite strong in time trials so she'll definitely be a contender tomorrow for the podium, maybe even for the win," Elvin said of Wiasak.

"I don't know how much energy she had to spend [in the road race] so that's a factor for everyone – that we've got quite a heavy race in our legs only two days before the time trial.

"It just depends how everyone recovers from that. For sure she's going to be one of the favourites."

Elvin's riding the time trial for the first time in a few years as she looks to continue her development in the discipline.

She finished fifth in the women’s road race on Sunday, which was won by young gun Sarah Gigante.

Elvin was part of the Mitchelton-Scott women's team time trial that finished fifth at last year's world championships in Austria.

"I'm never typically been one of the best time trialists, but I know that I can do well," she said.

"It's been nice over the last 12 months to put a little bit more emphasis on it because our team prepared specifically for the team time trial last year at the worlds.

"It definitely improved my individual time trialling abilities and I thought having a good race scenario like we do for nationals is a really good way to keep improving something I do want to be good at."