The sports streaming service DAZN has pinned its hopes on making deep inroads in boxing through superstar matchups. But this weekend’s action on the channel demonstrates how complicated that can get.

Two of the biggest names in boxing, Saul Alvarez, who is known as Canelo, and Gennadiy Golovkin, known as Triple G, are fighting on DAZN. But they are not fighting each other.

DAZN (pronounced DA-zone) surely wanted that when it signed a billion-dollar deal with Matchroom Sport, an English promoter, and a $365 million one with Golden Boy Promotions. The promise was 11 Alvarez bouts.

And one of those fights would be Alvarez and Golovkin in a rematch of their two previous bouts — high-action, high drama fights that drew a combined 2.2 million pay-per-view buys on HBO.

Their first fight ended in a draw, and their second in a slim decision win for Alvarez, setting the stage for a third bout.

But instead on Friday night Golovkin fights in Hollywood, Fla., against Kamil Szeremeta, while Saturday in San Antonio, Alvarez challenges the W.B.A. super-middleweight champion, Callum Smith of England.

The allure and uncertainty of a third Alvarez-Golovkin bout flows from factors that often govern whether big fights happen: pride, competition and business.

Golovkin (40-1-1) wants to avenge his only career loss, against Alvarez.

Rather than commit to another bout with Golovkin, the I.B.F. middleweight champion at 160 pounds, Alvarez says that as a competitor he’d rather face incumbent champions at 168 pounds, but acknowledged a big enough payday could sway him.

Eighteen months ago, the path to a third Alvarez-Golovkin bout looked clear. Both men recorded wins in the spring of 2019 on DAZN, which held broadcast rights to both boxers’ future fights. 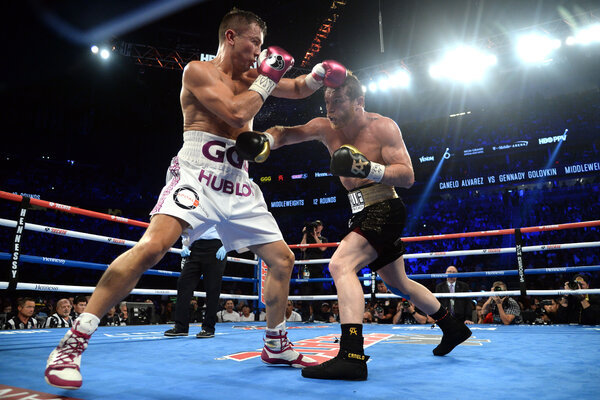 For DAZN, a quick pairing of its two marquee middleweights could have helped recoup the cost of an agreement with Golden Boy that guaranteed Alvarez an average of $33.2 million per bout. DAZN positions its subscription model, with monthly or annual payment plans, as a high-value alternative to pay-per-view fights, provided they can deliver premium bouts like another Alvarez-Golovkin rematch.

“Fans think a trilogy is required,” said Joe Markowski, DAZN’s executive vice president. “We’d like that fight to happen. We’ve been consistently clear on that.”

But instead of fighting Golovkin again, Alvarez jumped two weight classes and, in November 2019, knocked out Sergei Kovalev to win a light-heavyweight title in his last bout before the coronavirus pandemic upended pro sports.

And in September Alvarez sued DAZN and Golden Boy, alleging negligence and fraud. In November, Alvarez succeeded in ending his contract with Golden Boy.

“I’m a free agent,” Alvarez said in an interview. “I do co-promotions. This time it’s with Eddie Hearn.”

Hearn, who, as the managing director of Matchroom Sport is the biggest beneficiary of DAZN’s boxing spending spree, lured Alvarez back to DAZN by matching him with Smith, the World Boxing Council’s super-middleweight champion.

“If he beats Callum Smith, I’ll be doing everything I can to make sure he stays on the platform,” Hearn said in an interview.

An Alvarez win isn’t guaranteed. Smith is undefeated, with 19 knockouts in 27 wins, and, at 6-foot-3, towers over the 5-foot-8 Alvarez. But a victory would give Alvarez leverage against broadcasters and promoters eager to secure his next fight.

Alvarez’ free agency could make a third Golovkin bout either less likely or more expensive. He could choose an opponent from another managerial camp, like the winner of next month’s title fight between Caleb Plant and Caleb Truax, both managed by the boxing power broker Al Haymon. Or he could demand more money for a promoter aligned with DAZN to organize another Golovkin rematch.

But the pandemic complicates that process, too. Alvarez and Golovkin’s first bout generated $27.1 million in ticket sales, money that helped finance the fighters’ eight-figure guarantees. Without the ability to fill an arena — Saturday’s attendance is capped at 12,000 — organizers lose a crucial revenue stream.

For his part, Golovkin is pessimistic.

“It’s not my fault that this fight has not taken place,” Golovkin told Agence France-Presse. “It’s too early to say, but there is a possibility that this fight might never happen.”

DAZN, however, still has ambitions of becoming a major player among American sports broadcasters, and is motivated to keep elite, widely-followed fighters like Alvarez on its platform.

In 2017, a year before launching in the United States, DAZN debuted in places like Japan and Canada, often to poor reviews. In Canada, the streaming service outbid cable operators for rights to N.F.L. Sunday Ticket, and spent lavishly on parties and social media influencers to promote the deal.

But broadcasts were riddled with glitches. Users complained of frozen or pixelated streams, long delays, and broadcasts without audio, prompting the N.F.L. to invite cable operators back to Sunday Ticket.

Before its debut in the United States, DAZN hired two former ESPN executives, John Skipper and Jamie Horowitz. But with broadcast rights to major team sports tied up in long-term deals, DAZN has recast itself as a boxing-first streaming service, and earlier this month began service in 200 countries worldwide.

“As a starting point, boxing is an essential component,” Markowski said. “It has an ability to command the attention of the sports public for moments in time.”

The list of new markets includes England, where boxing remains a mainstream sport, and where viewers can only watch this weekend’s fights on DAZN. And the expansion gives DAZN and its boxing promotional partners more incentive to arrange a third Alvarez-Golovkin bout.

“That’s a fight that does numbers in hundreds of territories around the world,” Hearn said.