ARSENAL debutant Dani Ceballos forgot to Toon the other cheek as he got battered in the face by team-mates celebrating Pierre-Emerick Aubameyang's winner at Newcastle – even BEFORE he came on as a sub.

Spain midfielder Ceballos, on loan from the Bernabeu, looked Real Mad as he was accidentally clattered by Gunners' players rushing to mob Aubameyang. 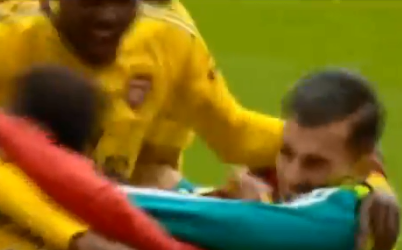 The 23-year-old was clearly miffed to be biffed as he recoiled and struggled to break free from the hugging stars.

The playmaker held his nose gingerly as he walked off after getting clipped in the head by a couple of stray arms.

But poor Ceballos did not quite the sympathy on social media he might have hoped for.

One fan tweeted of Arsenal's goal joy: "They're excited that they might actually win with a clean sheet for once ?."

And another supporter suggested goal-maker Ainsley Maitland-Niles was the main culprit in the accident.

He posted: "lmao Niles knocked him out."

But some fans claimed the bashing just showed how much Unai Emery's men cared after their 58th minute clincher in a tight contest.

Emery later insisted  the Gunners had controlled most of the match and "deserved" their 1-0 Premier League opening-day win.

In contrast, new Toon boss Steve Bruce said: "There weren't many opportunities but I think we had the better ones.

"The disappointment is gifting them the goal. And usually at this level you get punished for mistakes like that."

Indeed, Bruce believed Newcastle had been shutting Arsenal out with great efficiency.

So after Aubameyang pounced for his 33rd goal in 50 Prem games, Ceballos was not the only person to finish the match with a surprise headache.