Greg Chappell will step down as selector and Cricket Australia's national talent manager after this year's Ashes series.

Chappell, 70, has informed CA that he will retire, ending a long and distinguished career as a player, coach, selector and administrator.

It continues the raft of changes in CA's high-performance department in the wake of the Longstaff review called after the ball-tampering controversy in South Africa. 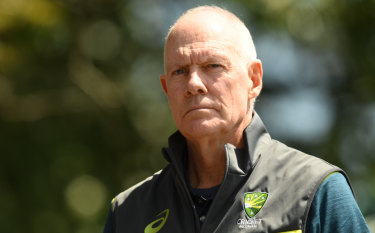 End of an era: Few men have contributed more to Australian cricket on and off the field than Greg Chappell.Credit:AAP

CA is already on the hunt for a new head of high performance, a role currently filled by Belinda Clark after the departure of former Wallaby Pat Howard.

One of the finest players to wear the baggy green, Chappell is better known to contemporary audiences as a selector – a role he has had three stints in from 1984-88, 2010-11 and since 2016.

The news comes only weeks after head selector Trevor Hohns said the panel was under review amid of one of the men's team's most unsuccessful periods.

There is also a belief held by some at CA that selectors need to better explain their decisions after recent criticism by out-of-favour players over a perceived lack of communication.

The structure of the selection panel is likely to be addressed in the coming months; some favour a move to a more streamlined system where the coach will have greater say in the picking of teams.

Chappell has been a major influence on the Australian game, more recently as a selector with his controversial youth-driven initiatives.

His ideas have been widely criticised by many former stars, who believe it has rewarded potential over performance.

There is also a view within the game that the emphasis on youth has had a negative trickle down effect to lower ranks by forcing seasoned pros to retire earlier in the belief they were no longer being considered for higher honours due to their age.

This, his critics argue, has then left the next generation without experienced heads to turn to as they move up through the ranks.

CA's pathway system was slammed by the Longstaff review, which said elite male players were operating in a "gilded bubble" and were perceived to be "arrogant, entitled and self-centred".

Chappell, however, has had a long history of success in finding future stars. He was part of the panel in the 1980s that blooded players such as the Waugh twins, Ian Healy, Craig McDermott and David Boon, all of whom played key roles in Australia's rise to the top.

In 2011, he oversaw the selection of David Warner, Pat Cummins and Nathan Lyon – all of whom made their Test debuts very early in their first-class careers.

Travis Head, Kurtis Patterson and, to a lesser extent, Marnus Labuschagne are among the more recent debutants who have shown promise at Test level.

Meanwhile, Sri Lanka coach Chandika Hathurusingha said he has not been told by the board why he has been relieved of selection duties.

"I was not given any reason, it’s beyond my control and after this tour I probably will have a chance to speak to the authorities," Hathurusingha said.

"At the moment I don’t have much communication, so I can’t give you much. Once I finish this series I will probably be in a better position to answer that."