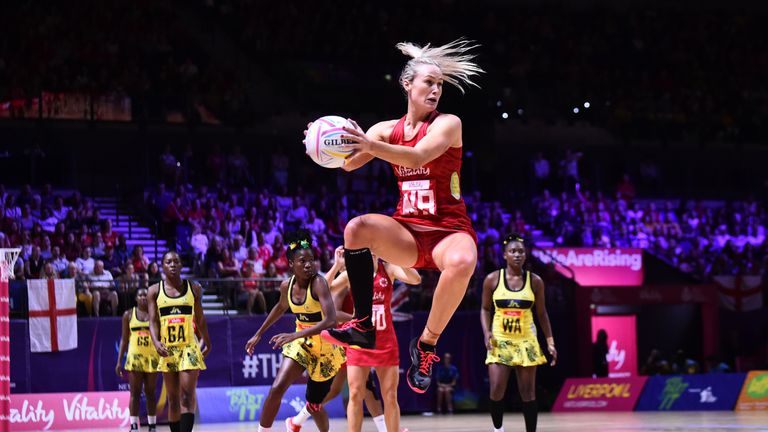 England’s Chelsea Pitman is already a World Cup winner with Australia and as she sets her sights on another title, Sky Sports found a woman reborn with the Roses and epitomising the confidence in this driven band of players.

It was July 10, 2011 when Pitman stood on the podium in Singapore, clutching a gold medal in the gold of Australia. At the time, the 23-year-old thought she would never feel prouder.

However, fresh from England’s impressive 56-48 victory over Jamaica on Tuesday, things have changed for Pitman.

“Winning with Australia was amazing, I was bit of a deer in the headlights back then because I was quite young,” she tells Sky Sports.

“Since I’ve become a Rose, it is home. I am so proud to say that I am an English Rose and it’s my greatest achievement.”

This right here ⬆⬆⬆ are the memories I will cherish forever!???? #tbt #singapore2011 #netballworldcup @kimmygee8

This right here ⬆⬆⬆ are the memories I will cherish forever!???? #tbt #singapore2011 #netballworldcup @kimmygee8

Pitman qualifies to play for England through her father, who was born in Dorset, while her brother still lives in the UK. In modern, multi-cultural Britain the wing attack’s tale is a familiar one. She was not born on these shores, but she represents the country with a huge sense of pride.

In Pitman’s case, her appreciation came after seeking solace, following a public end to her marriage and very open admission in a Players Voice article that she was seeking something more.

It is English netball and coach Tracey Neville that have given her back a love for the sport that had ebbed away.

“I feel such a sense of belonging and welcoming and my uniqueness and weirdness is accepted,” Pitman added. “My style of play flourishes and is nourished, it’s amazing. The culture, the people, the girls – it’s one of a kind.” 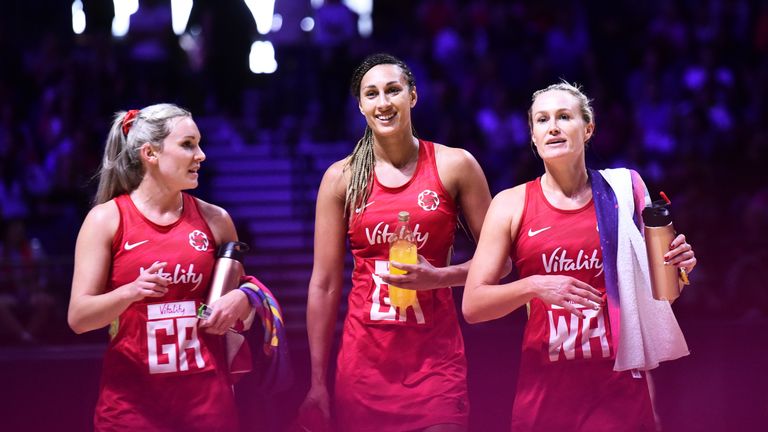 Culture has become a big part of sport – in particular sporting success – and this England netball team have a culture that comes with winning.

Commonwealth Games gold last April has fuelled these players, and there is a confidence about them rarely seen in an English team. Dare we say it, but there is a distinctly Australian feel to things, epitomised by Pitman, who is proud to call herself a professional.

Sky Sports’ expert Tamsin Greenway feels that a belief from playing with, and against, the very best in the Suncorp Super Netball competition is part of what makes these England Roses so strong.

“Chelsea, who has come through that environment because she’s been brought up in Australia, playing out in New Zealand and then coming over here, she’s seen it all and been there, done that,” Greenway says.

“They’ve almost all been in that environment now (Suncorp), so many of those players arrive and have been in it, or are still in it. It’s just a different breed.

“Most players have been in that environment for five or six years now, so of course you’re going to look at it very differently.” 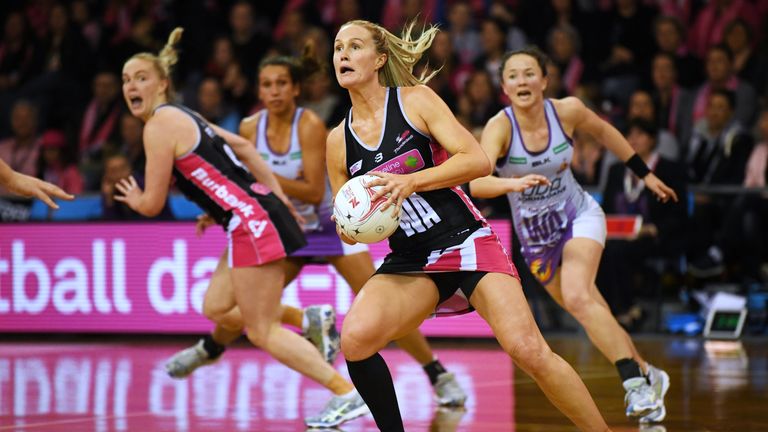 Since her appointment, Neville has set the tone for this England team. Alongside CEO Joanna Adams, an elite player programme has been set up – and Pitman is part of it – alongside a squad that have honed their game in Australia’s ultra-competitive and professional domestic league.

It’s where Pitman still plies her trade, and while Australia is where home is once again, it is Neville’s home turf of Manchester that Pitman’s England Roses rebirth came – playing for Manchester Thunder.

“I thought, ‘Do you know what? I’m going to go overseas, get to know a bit more about my dad’s side of the family and got involved with England netball in the Superleague,'” she remembers.

“I found that it was so much fun and great and just loved it. I realised that I wasn’t done with the game and it gave me a purpose again to think that I’m good enough and that this is great.” 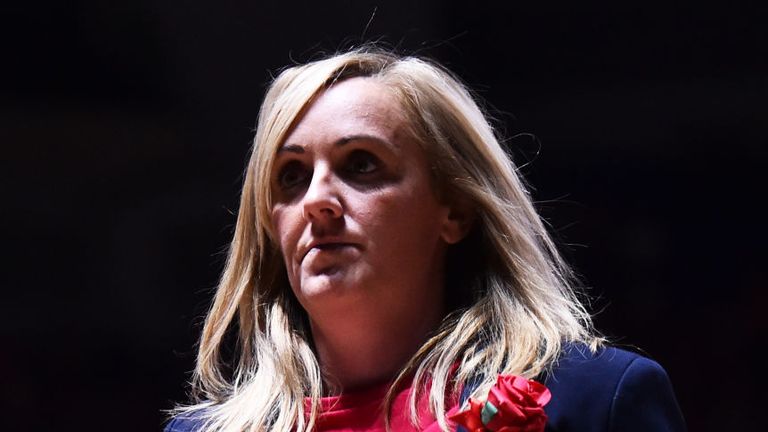 Chelsea Pitman on the England coach

England are grateful for it too. Pitman’s presence is key to the way Neville wants to play and it’s hard to not believe that her Aussie mentality hasn’t played a part in England’s progress over the last 18 months.

“WA is a real leader of that end, a good WA should be dictating the play and showing what’s going on around it,” Greenway added.

“Chelsea’s been in that group now for quite a while, and it suits Tracey’s style of coaching, the same as the Aussie style and you can see they work well together. Tracey completely trusts Chelsea to do the job.”

Pitman made her England debut in 2017 in Durban against South Africa and has played a crucial role ever since. Fuelled by a renewed love of the game and the embrace of her team-mates, there is another thing firing Pitman and the England Roses cause – the fans.

The M&S Bank Arena has been a raucous venue and Pitman, used to the sell-out arenas in Australia, is well placed to comment.

“This crowd and this atmosphere is the most exhilarating thing that I’ve ever experienced,” she said with a smile.

“You don’t necessarily hear it when you’re in the zone but you just feel this roar and it gives you goosebumps through your body. 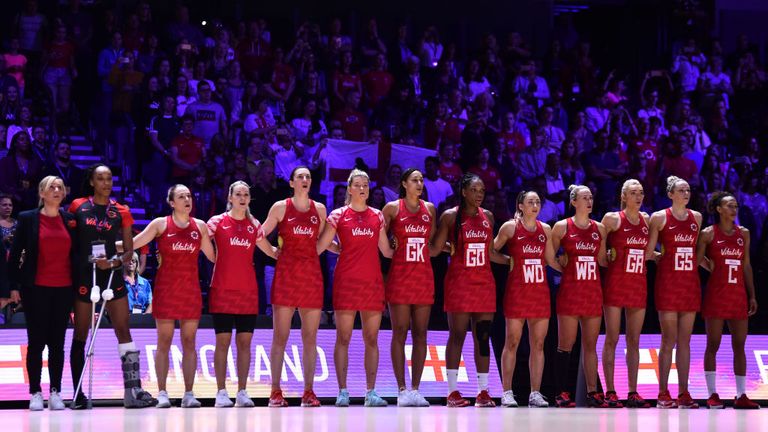 “They’re not just loud and proud for us, obviously they take it to another level for us, but they’re sticking around and being engrossed for all of the games are giving their lungs worth.”

England can secure a semi-final place with a win against Trinidad & Tobago on Wednesday. They have embraced their status as world class athletes and major contenders. They are a team playing at the peak of their powers and the players themselves are happy to embrace the notion that they are here to win.

“I truly believe that if we play our best, we are unbeatable,” Pitman added. 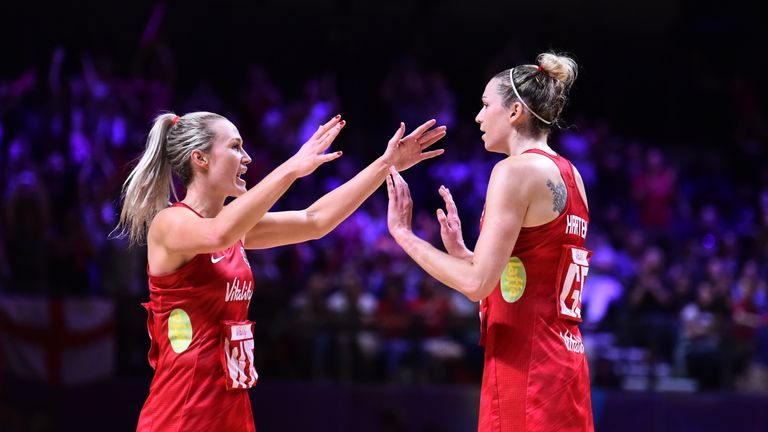 “That’s not coming with any part of arrogance or anything, it’s just pure confidence in that we have the team and it’s just about are we able to implement the game plan and stick to it for 60 minutes?

“With all the pressure and everything else we just take it in our stride. That’s why we do what we do because we’re elite athletes.”

It’s no surprise to see Pitman circle back to the reason for the interview, her immense pride in the opportunity that has been offered to her, and not just what another World Cup win might feel like.