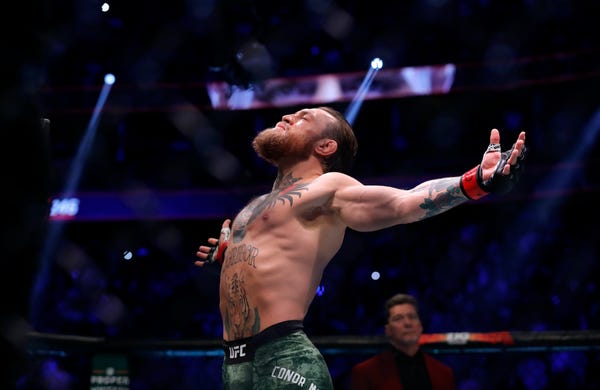 Conor McGregor's long-time trainer John Kavanagh suggested the prospective UFC fight against Dustin Poirier will be in the welterweight division.

It would be the second successive bout at the 170-pound limit for McGregor, having beaten Donald Cerrone in January.

Poirier, who rebounded from a 2019 submission loss to Khabib Nurmagomedov to defeat Dan Hooker in an all-time great slobber knocker this year, would be moving up from lightweight to take the fight.

A probable January bout between McGregor and Poirier would be a rematch from a 2014 bout in which the Irishman defeated Poirier with ease.

Both athletes have improved significantly since then. Poirier is considered the No.2-ranked lightweight, according to the UFC.

"Watching Conor McGregor do MMA rounds [in the gym] lately has been a real joy and education," Kavanagh said on Twitter.

"Fluidity of movement with elite level timing and skill. Dustin has improved so much since the first meeting, [but] Conor has improved much more.

"To see them hydrated and healthy at 170 will be fascinating."

When challenged why the fight should take place at 170 over 155, Kavanagh said: "What possible interest have you in watching two guys who are 170 spend 48 hours cutting to 155, to become 170 again immediately after scales?

"Are you a fighting fan or some odd interest in looking at dehydrated men in underwear fan?"

The agreed division has ramifications for the lightweight landscape

The incumbent of the lightweight championship title Khabib Nurmagomedov, who defends his title against Justin Gaethje at UFC 254 at Fight Island on October 24, previously said that whoever defeats Poirier deserves the next shot at his belt — even if that is McGregor.

If McGregor and Poirier compete in a division outside of lightweight, that complicates how the match's winner can force a title shot at 155-pounds.

Poirier is an accomplished lightweight competitor, beating Gaethje, Eddie Alvarez, Max Holloway, and Hooker in that division over the last two years.

In contrast, McGregor has not made weight at the 155-pound limit since his UFC 229 loss to Nurmagomedov in 2018.

To further complicate matters, Nurmagomedov is now saying the recent UFC signing Michael Chandler, a former Bellator MMA champion, should get the next shot at the lightweight belt providing he can beat Islam Makhachev, according to the MMA analyst Chael Sonnen.